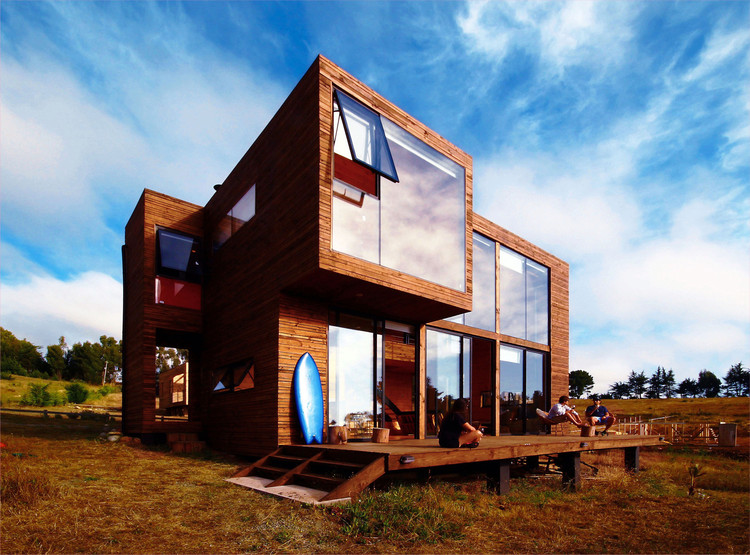 Text description provided by the architects. A place of refuge for a surfer who rescues the sea on its horizon.

At the edge of a dirt road surrounded by old eucalyptus and cypress trees, you can discover the hills of Punta de Lobos, Pichilemu, a lonely and elevated landscape with the sea on its horizon is the terrace to one of the best waves worldwide.

The house is located on a hillside; therefore the importance of respecting and integrating the neighbouring buildings is fundamental. This premise configures the main layout and volumes that reinforces the will to orient to the landscape.

Being a holiday refuge, two volumes are designed; a large public volume with an open double-height interior for the first and second levels. This organization facilitates the communication between spaces with open view to the landscape oriented on the long side.

The other volume, private, is located on the second level and it’s intended for a more intimate space that frames the sea and the waves of Punta de Lobos.

A simple materiality, using local wood was considered. The ventilated façade system, based on a horizontal wood panelling system, allows greater thermal insulation and an aesthetics setting that synthesizes the proposal and helps it to be seen as a holiday refuge.

The house is raised on stilts to avoid interfering with the landscape, it’s perimeter is built with steel beams structure to achieve bigger spaces.

The interior layout is an open floor plan. The first level contains the living, dinning, kitchen and terrace that share the views between the different units. It also has a guest bathroom that works simultaneously with the exterior for the surfer. On the second level, on the north side, is the master bedroom that frames the sea with a defined cantilever. Towards the south side a circulation/view point that generates a double height volume that ends in a guest built in site stateroom and light entrance for a possible future extension.

During day and night all these areas dialogue generating flexible use of the spaces. 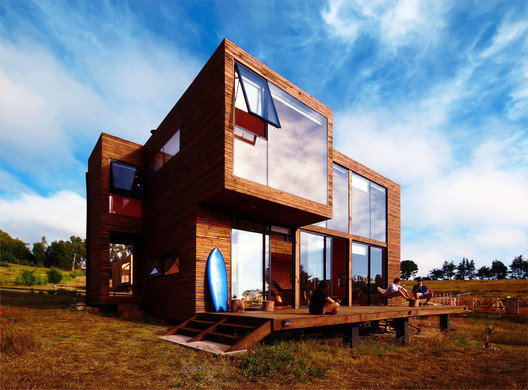