"The thing about architecture is that you cannot teach it. You can learn it, but you cannot teach it. And a good school is a school which makes you passionate about architecture and that teaches you how to ask questions. [...] If you know how to ask the right questions, you will develop your own philosophy and your own visual vocabulary." (in conversation with Angela Brady, 2013, shown below)

To coincide with the donation of a large proportion of his archive, the RIBA held one of the first major retrospective exhibitions of Correa's work in 2013. The event showcased some of his most important work, including the Mahatma Gandhi Memorial Museum, India; the MIT Brain and Cognitive Science Centre, USA; the InterUniversity Centre for Astronomy and Astrophysics in Pune, India; and the Champalimaud Centre for the Study of the Unknown in Lisbon, Portugal. The exhibition also highlighted Correa’s designs for housing (such as the the Kanchanjunga Apartments in Mumbai) and cities in relation to climate change and affordable housing. It also examined some of his projects to improve cityscapes, including his urban masterplan for Navi Mumbai (New Bombay).

Throughout his life Correa was a well known critic of the way that modern cities have been, and are being, designed. TIME have quoted him as saying that "market forces do not make cities, they destroy them."

See ArchDaily's previous coverage of Correa, including his Kanchanjunga Apartments in Mumbai here, his Champalimaud Centre for the Unknown here, and the 2013 retrospective of his work here.

News via Times of India 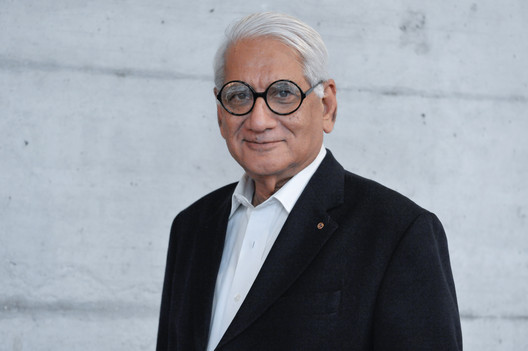