Text description provided by the architects. The project involved the refurbishment of an existing listed building. It is sited in an agricultural environment dedicated to irrigation cultivation. That is the reason why the regulations determined that the existing building could not be demolished in order to build a new one.

This house, almost in ruins, was disposed by two buildings around a patio: a house and a poultry house. Both buildings were built by stone walls in bad conditions and covered with a metallic temporary roof.

The intention of this refurbishment is to take advantage of the a few traditional items of the building, such as the thickness of the walls and the orientations and going a step further the conception of the domestic space and evolve the imposed functional structure: small openings and hierarchical spaces that do not allow the flexibility demanded by the current contemporary life.

On those basis, the existing functional layout was modified so that the house could be organized in privacy gradients. From the external facades the house seams introverted and most of the rooms are opened to the internal patio, which is the space where the life runs around. The less private rooms (foyer, living room, kitchen, dining room, play room) are opened to this central space, which is understood as another room of the house, generating a panoptic view. The rest of the rooms connect to a common area conceived as an extension of the room’s privacy and allowing for a flexible use.

One of the goals was to develop the project trying to minimize the economic and energy costs; that is why the building envelope is made with a unitary material allowing for a reduction of the general construction costs and giving to the project a self-identity. Moreover, it allowed the house to merge with the surrounding landscape. Local materials and techniques have been used taking the maximum advantage of natural resources such as cross ventilations or vegetable canopies.

The resulting house assumes the continuity condition with the scenery and can be understood as a proposition of a modern way of life related to old preexistences throughout a sober and controlled language. 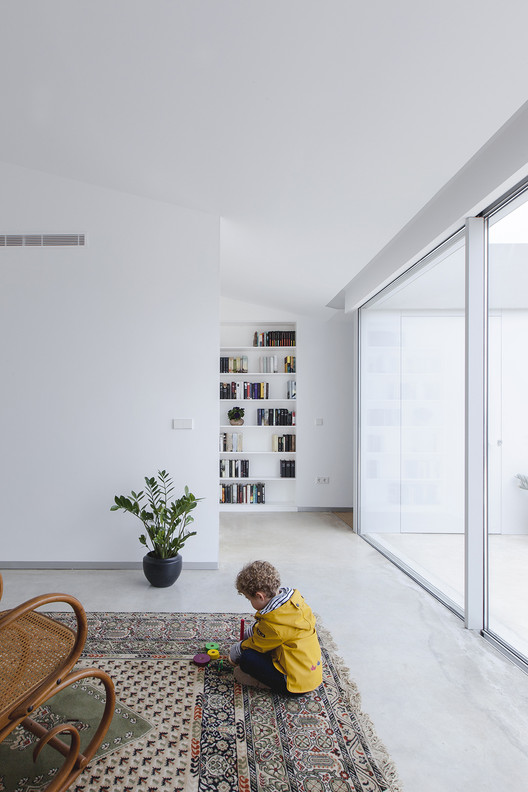