Envisioning the House of Hungarian Music as the new center of distribution within Liget Park, MenoMenoPiu Architects proposed a circular form for the concert hall, facilitating circulation to and from the museum and within the park. Although not the final winner of the Liget-Budapest Competition, “The Circle” demonstrates an interesting organizational strategy and perspective on sound. 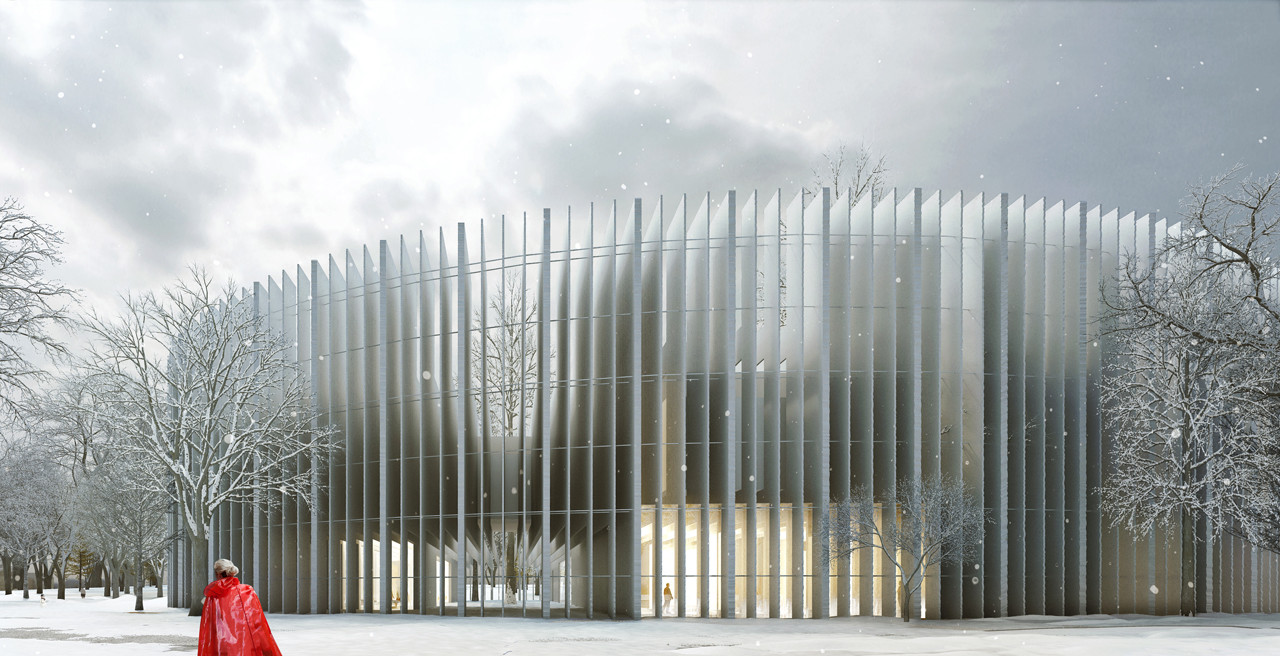 As the only stand-alone building in the new museum complex of Liget Park, the new House of Hungarian Music will be a major attraction of the city park. With its construction, the axis of the park will be re-centralized to its position in 1813, from the 1956 Memorial Square to the Petofi Event Center. The shape of The Circle is meant to redistribute the internal circulation of the park, exemplifying the project’s central position to the park and facilitating movement between the new museum complex and existing services in Liget Park.

Attempting to respect the environment of the park while creating a landmark, MenuMenuPiu's proposal calls for the conservation of 95% of existing trees, selected based on health and age, with the remaining 5% moved inside a construction-free area near the Lakeside. In addition, the structure of The Circle is composed of parallel blades, perpendicular to the new axis of the park to create a relationship with the lake. Theses beams will project themselves over and around trees of varying sizes on the site, allowing the trees to grow around them. Overall, the design conforms to the 2020 near-zero energy requirements for buildings, making use of tree cover, natural ventilation and thermal massing to provide a comfortable, low-impact micro-climate.

Taking inspiration from its program, the structure resembles a pentagram with a 4/4 time signature, with five staff lines and four intervening spaces, in which the top and bottom lines become structural elements. The conserved trees reflect a blank sheet of music and the movable exposition windows reflect musical notes, aiming to create a sense of rhythm.

The programmatic design of the building demonstrates the different qualities of sound to visitors. The Circle includes both all of the common elements of a concert hall such as a performance hall, temporary exhibition space and an outdoor theatre, as well as more eccentric programming such as an echo, anechoic and elliptical chamber. Conceptually, the visitor is meant to experience the many different kinds of sound propagation as they move through the space.

Read about Sou Fujimoto's winning entry for the Liget-Budapest competition to design the House of Hungarian Music here.