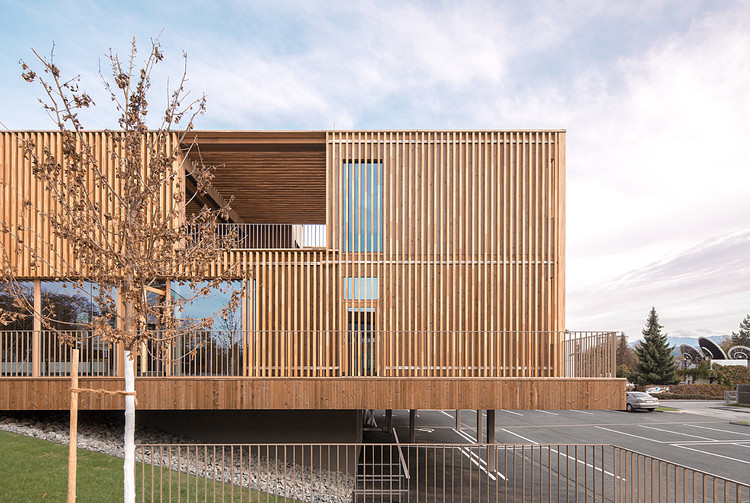 Text description provided by the architects. From the early stages of the competition for this bank building, there was a clear focus on contemporary architecture and sustainable building methods which could be completed in a short period of time, with a crucial aspect on the mixed usage of key spaces. The bank’s objective was to create a customer and employee-friendly, relaxed atmosphere not only through the building itself, but also by integrating a bakery with a café into the bank.

These ideas were approached from both spatial configuration and urban development perspectives, as well as through the careful selection of materials. The lower ground floor of the building consists of reinforced concrete and is partly covered by the site’s natural slope. In an effort to conserve resources, the two upper floors were constructed using prefabricated cross-laminated timber elements with parts of the wooden surfaces of the wall and ceiling surfaces left visible. The outer walls of these two floors are of a wood-frame construction, with a view to reaching the target CO2 balance and completing the building within the planned nine months. The outer surfaces of both upper floors are clad in untreated larch lamellas except where a more open connection between inside and outside was desired. These lamellas, along with the pre-weathered larch panelling behind the lamellas, form the building’s characteristic appearance and give the outer surfaces structure.

The positioning of the building ensures that customers have easy access both from the car park via the lower ground floor and from the street to the ground floor. The compact shape of the structure gives it a understated, private, yet distinct component, standing in contrast to its surroundings, while tying in with the existing period villas south of Villacher Straße and on the other side of the Lend Canal.

The different areas of the bank are positioned around a central atrium. In the lower ground floor, there are archive, technical and storage rooms. From here, the staircase and the lift, adjacent to the atrium, lead upwards to the more functional parts of the bank. The reception area on the ground floor leads to the bank counters, customer advisory rooms and a bakery and café, which open out on to a west-facing terrace. On the next floor are further advisory rooms, bathrooms and a meeting room.

The quality of the inner space is achieved not only through the choice of materials, but also through a three-dimensional concept which goes beyond purely functional considerations, and the natural light that enters the building via both the atrium and the glass roofed terrace on the west side of the building. The light is somewhat filtered by the timber lamellas on the façade and along the linear stair case, creating a pleasant atmosphere, as well as the partly satinated glass between the offices and the reception area. The particular positioning of the meeting room provides direct access to the terrace and affords views over the treetops along the Lend Canal. 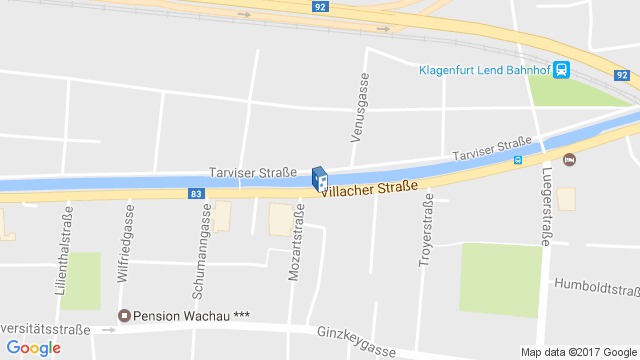 Location to be used only as a reference. It could indicate city/country but not exact address.
Share
Or
Copy
About this office
Dietger Wissounig Architekten
Office
••• 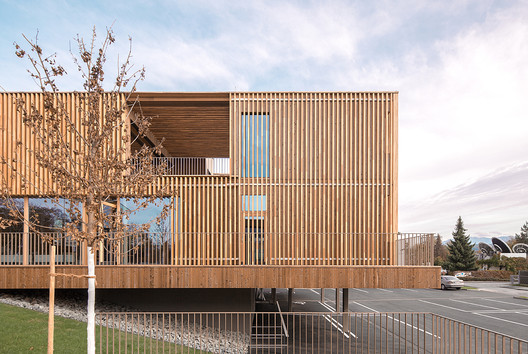