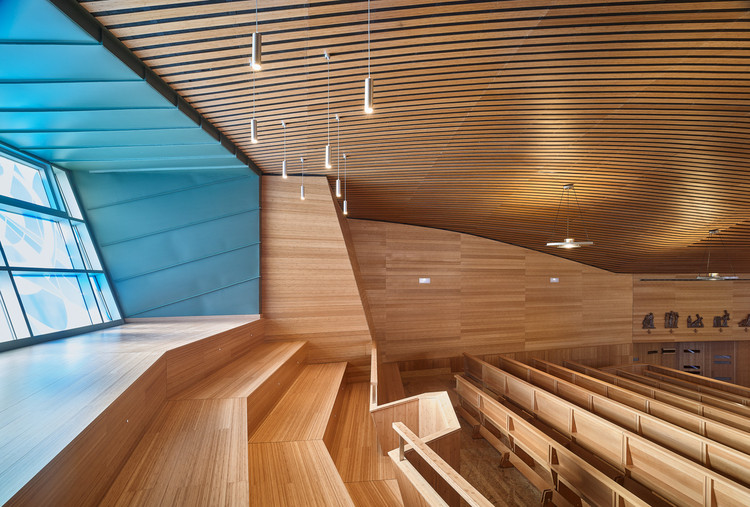 Text description provided by the architects. The Retamar School had a chapel for 250 persons, after 50 years of teaching activity and a capacity of more than 2.250 pupils, insufficient for the important annual festivities taking place in this center. We got the commission to present a proposal to substitute the existing building for a new one, with a capacity of 600 persons and an additional auditorium for 450 spectators. Our project was looking for the integration with the rest of the edification, constructed in bricks, but being a representative building for the school at the same time, standing out with its grand roof done out of green zinc.

The building is managed through its interior: The inside space of the oratory, which is logically the most important of the project, has given it its character and its “soul”. A successive division of the great interior space was the strategy. Light enters through the triangular skylights of the roof from portico to portico and is led to the presbytery, dominated by the shrine.

The entrance, placed under a huge and important stained glass incorporated to a curtain wall, is on the wing, which opens to the redesigned plaza of the school. This entrance unveils its asymmetry by creating a first rupture: A grandstand with few steps to the left side, and to the right the main part of the nave. The higher level grandstand and the chorus are used for special days with higher turnout. The lighting there is achieved by a picture window, done as well with stained glass, which, although having a different shape, reminds to a rose window.

The nave is covered with timber out of bamboo, worked by Grupo GUBIA in slats at the ceiling, in order to get perfectly adapted to the different curved surfaces of the roof and to achieve the transition from curve to plane, where panels are used. The inside shell of the presbytery substitutes the bamboo for titan with a golden flair, as well as the golden granite changes to green granite around the altar, to mark the difference and the importance of this area.

The bamboo, apart from reinforcing the continuity of the whole space, gives singular warmth and allows that a space with this volumetric character, is capable to proportionate the surface for the acoustic absorption between its slats for chant, word and prayer. All the timber used in the building except the benches is bamboo because of the special properties of this wood.

The aisles, playing with the division of the roof, are forming the main entrance under the curtain wall, or are creating the emergency exit and the access to the sacristy following the curved front formed by the confessionals, as well done out of bamboo. The effects achieved by the natural lighting get reinforced and accentuated by the artificial lighting.

The oratory appears as a unit, proceeding down through a concrete staircase to the lower level of the auditorium under a huge skylight. On the same floor there are three classrooms, toilets and technical rooms .

The interior of the auditorium is formalized by the contrast of two main surfaces, two finishes very differentiated: Galvanized deployé metal shields and bamboo panels. This interior game of two main spaces gets expressed at the exterior by the dialog between the brick and the zinc, the static and the dynamic element. 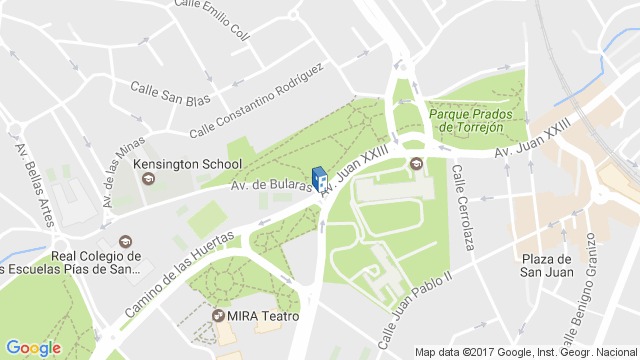 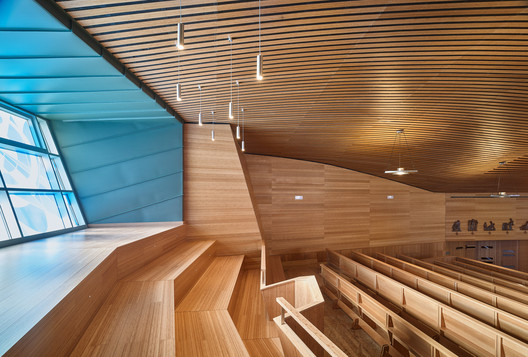