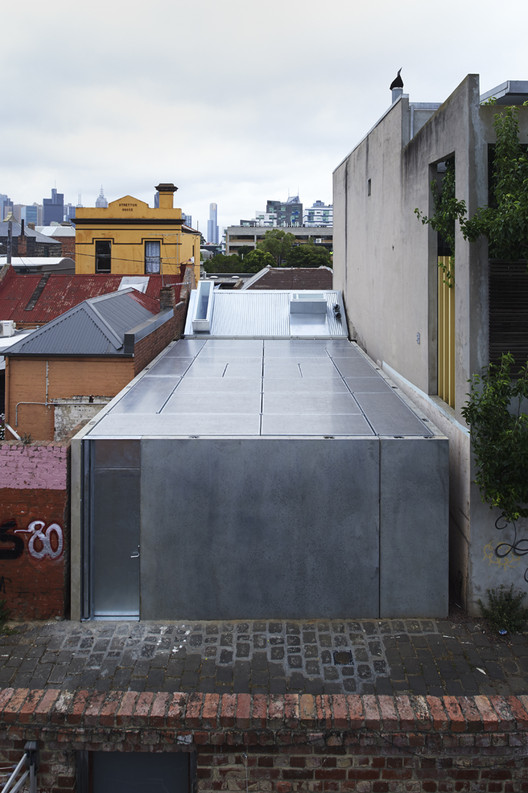 Text description provided by the architects. Alterations and additions to a small heritage listed timber cottage in inner suburban Melbourne. Planning and heritage requirements and construction costs fundamentally drove the outcome of this project. Our client came to us wanting a new house. For reasons only known and understood by the local authorities the existing cottage was deemed to be of some historical significance. We disagreed with that assessment but to no avail. It was a case of limp-wristed facadism by the authorities and heritage 'experts'. Instead of abandoning our client we agreed to start from scratch, keeping the front section of the cottage and reworking it and then building a discrete fully new section at the rear of the block. I saw the project in a different light and chose to re-visit some projects that had inspired me as a young architect - Kazuo Shinohara's 'House in White' and 'House in Hanayama No 3' and Tadao Ando's 'Row House in Sumiyoshi' or 'Azuma House' as it is sometimes known. The 'Row House in Sumiyoshi' is a work of genius and I have written elsewhere about that building describing it as 'a seminal work of the second half of the twentieth century'.

In simple terms the cottage interior is remodelled to have a cathedral ceiling with a pair of timber posts supporting the ridge beam and two light cannons directing light to the centre of the single space formed by the demolition of an existing wall. A small courtyard bound by concrete walls separates the cottage from the small addition, evoking the 'Row House' in the process. To address issues of overshadowing and overlooking we kept the height of the addition low (3.0m overall) and to compensate for a lack of light we made the roof of the entire addition glass with an automated timber sunscreen. The sunscreen protects the occupant from summer sun but can be configured in a variety of ways to allow the ingress of winter sun. As the screen is operated from inside the appearance of the building changes. If the owner so desires they can use the roofscape as an additional outdoor living area.

We finished the design of this project at the same time that the RMIT design Hub was completed and it served as poignant reminder that the power of architecture is independent of scale.