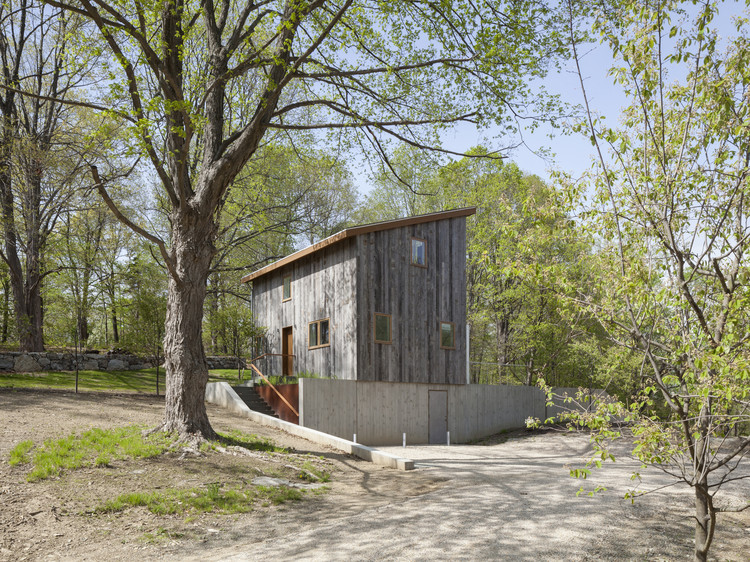 Text description provided by the architects. The Old Albany Post Road is a historic supply route that is on the National Register of Historical Places. It runs through Garrison – where Sharon Davis has had a house for more than 20 years ‐ on its route from New York City to Albany. Davis bought the three‐acre site, which abuts the road on one side and 70 acres of nature preserve on another, to protect it from development. She ended up inspired to design and build a one‐bedroom house for herself that paid homage to the historic nature of the road and town. She was adamant that the house be small and have a light environmental touch, while still feeling comfortable, modern and luxurious.

The existing house on the site became the starting point for the design because of its elegant size. The new house was created using the original house’s footprint, but engages the surrounding environment in numerous ways.

The façade that faces the Old Albany Post Road defers to its historic nature, but in the rear, the façade is sliced in half, through the use of fully retractable windows on the ground and second floors, which reveals the interior and invites the outside in. This provides a connection to the outdoors, which makes the 900‐square‐foot house feel larger and more integrated with its surroundings. A quadrant pushes out from the ground floor, connecting to a series of patios and steps, which cascade out into the landscape and tie the new house to the existing adjacent barn.

The house features high‐end millwork and finishes from recycled, reclaimed and local materials – all custom‐designed to maximize the use of space – such as salvaged pine and reclaimed oak on the exterior, bluestone slab on the exterior stairs, walkways and bathroom, a slate fireplace, a corten steel planter bed, blackened steel stairs and shelving and a poured‐in‐place concrete kitchen floor and island.

The goal to create a modern structure that is wholly in place with its surroundings was achieved through architecture that maximizes its engagement with the exterior and a use of materials that echo the found and traditional materials of the area. The result is an interplay between vernacular and contemporary, reclaimed and engineered, smooth and rough and old and new.