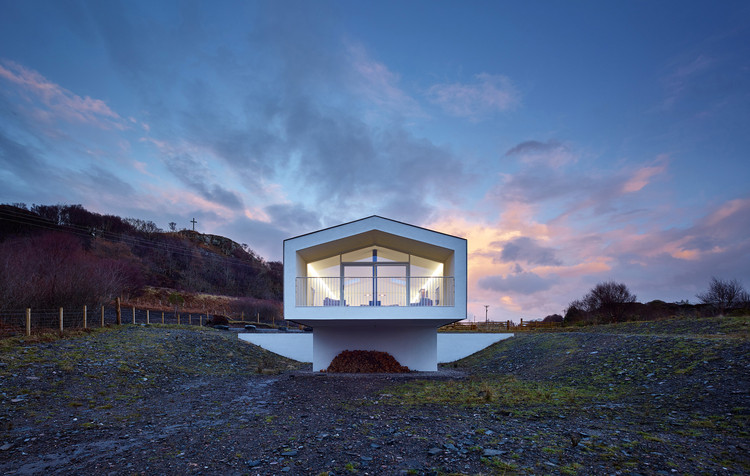 Text description provided by the architects. The site is located three miles South of Mallaig, overlooking the White Sands of Morar, with the Small Isles of Rum, Eigg, Muck, and Canna as a scenic backdrop. Two traffic arteries in the middle distance, the West Highland Railway and the Road to the Isles, follow the contours of the coast, leaving the sloped site confined between the two, in both position and datum. The endeavor of making the area accessible has left its traces, as excess excavations have been dumped on adjacent land, now mostly overgrown by dense vegetation and trees which form the foreground of the plot.

To address the site conditions, the holiday house consists of two stacked volumes with perpendicular focal points. The cantilevered first floor establishes a distinct connection to the distant scenery, while the ground floor below creates a focused view of the fabric of the immediate site.

In order to found the dwelling on the site's natural soil, the ground floor has been sunk at entrance level. This gives the dwelling the appearance of a single storey volume when approached from the site's narrow access track. Two long external retaining walls, at either side of the fully glazed eaves, mould the surrounding ground to slope gently towards the building, making the sites luscious vegetation the focus for the bedrooms.

On the first floor, that comprises all public spaces, the position of the openings is reversed. The eaves are fully closed, pushing the visitors view towards the far reaching scenery. This creates a contradiction: by eliminating the boundary between private bedrooms and site, the lower floor becomes a public space, while privatising the upper floor with dominant boundaries, the far reaching landscape becomes an inherent part of the public spaces.

The exterior of the building is treated with the same principle. A building with a dual pitched roof is an universally understood rural typology. This building is stripped of it's stereotypical attributes and the first floor is displayed on the recessed ground floor plinth, allowing the vernacular form itself to become the only focus. As a result, the question of the building's use remains unanswered to onlookers, with the contrast between artificial and natural further emphasised as the dense vegetation reclaims the site.

The building is protected by a timber rain screen. With down pipes and gutters eliminated, rainwater runs controlled as a curtain set back from the bedroom windows. The amount of light entering the building through the glazed walls and roof lights, acts to keep the atmosphere of the building diverse, with the outside becoming more dominant the darker the inside is kept.

All walls, both inside and outside, are white washed and continue past the insulated envelope negating the end of the interior space. This absence of materials provides a blank canvas on the interior, giving dominance to natural light as it is projected across all walls, mirrored from the continuous lacquered concrete floor. On the exterior retaining walls, the form of the building is cast as an ever changing shadow throughout the course of the day.

A holiday house essentially differs from a permanent residence as the period of stay is defined. This building captures that intersection of being part of a place and creating its own environment at the same time.

How much building is required to inhabit a place?