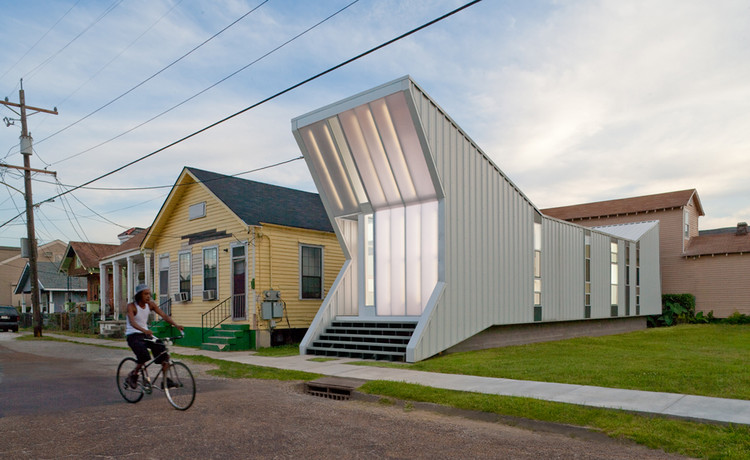 Text description provided by the architects. This affordable home arose out of the post-Katrina re-housing effort in New Orleans for an inner city neighborhood in dour need of new places to live. buildingstudio was working with an affluent client in Boulder, CO who voiced great concern for the lack of effort being made in New Orleans after the storm. As result we asked if they'd be willing to contribute toward an affordable home for a Katrina refugee. Not only did the clients generously give their own money, they invited their friends and colleagues to participate towards the cost of constructing an affordable home. The total sum contributed was $50,000.00. This generous contribution allows Neighborhood Housing Services, who promotes and markets low-cost properties in economically-strapped neighborhoods of New Orleans, to offer the house at a vastly reduced rate. buildingstudio, contributed its full design and coordination services as well.

The project is located in Central City, an impoverished inner-city neighborhood situated between the CBD and the prosperous Uptown area. Though Central City's infrastructure was severely deteriorating before the storm and it has one of the highest per capita of drug-related murder rates in the country, a resilient community fortitude still abounds. Infill housing is actively taking place on several fronts. Non-profits and faith-based groups have built several dozen homes for new residents hoping to move back. Most structures are either panelized or modular with little concern for design.

And while the best intentions went into these, they’re disappointingly constructed. This limits their lifespan and undermines the long-term viability of the neighborhood. Tulane University School of Architecture has also completed four experimental design/build projects in the area as tools to better research affordable construction strategies.

With an unusually narrow lot width of 19-ft, a maximum 13-ft wide scheme was all that was allowed. This resulted in an 9600 SF two-bedroom, bath-and-a-half scheme. Nicknamed “Alligator”, because of its “open-mouth” profile, its based on a very common traditional typology in the New Orleans area— the shotgun. This layout is where all rooms align in a single row, front to back, in order to fit the long narrow lots typical of the City. In this design though, to overcome the lack of privacy for the middle bedroom that a shotgun typically demands, a set of rolling doors permits privacy and allows passage to the rear bedroom and bath. In older neighborhoods like Central City, the front stoop is key since so much community involvement takes place on the street. It’s the common gathering place where neighbors meet and entertain each other. For that purpose, metal grate steps stretch across the front of the house for casual sitting while visiting with neighbors. The street facade is clad in translucent white insulated plastic panels on each side of the stud structure. Between these panels, fluorescent fixtures provide indirect lighting both for the exterior and interior living room. Off the rear main bedroom there is a narrow rear porch the width of the home. While considered low-cost, the budget still allowed for engineered hardwood flooring and ceramic tile in the bathrooms. The home, meeting hurricane resistance requirements, has insulated windows with an efficient thermal envelope to lower utility bills. Exterior walls and roof are clad in factory-painted, preformed metal siding for ease of maintenance and long-term durability.