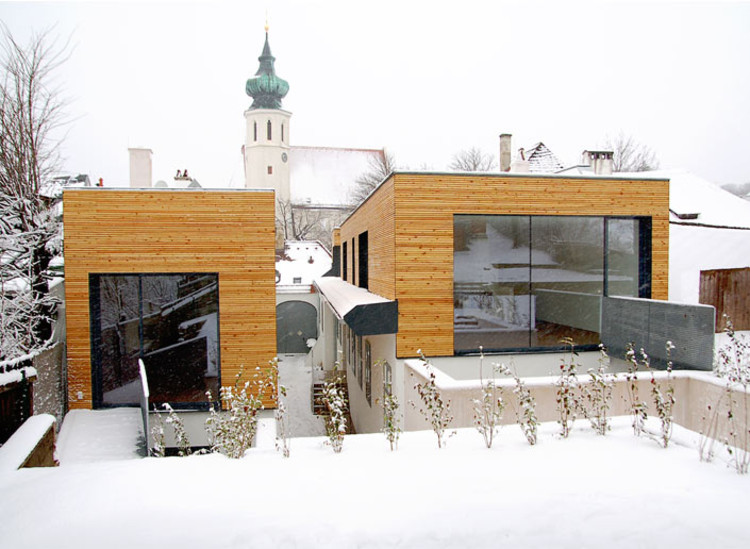 Text description provided by the architects. Modification and extension of an ensemble of historic buildings which were originated in different historical eras in Grinzing, an old established viennese quarter known for its wine culture.

The intention of the private investor was to renovate, adapt and extend the three parts of the former winery and later legendary tavern "Zur Reblaus" into an apartment building. The aim of the project – which was completed in December 2008 – was to preserve the charming overall impression of the complex situated in the noble district Döbling close to the Vienna Woods.

All the essential historic parts of the building complex (total effective area 1200 m2) had been preserved within the overall refurbishment. Lining the street the front side of the old tavern fits harmoniously into the appearance of the locality in Grinzing. The remarkable character of the oldest building – the subterranean vault and parts of the ground floor – as well as the listed former outbuilding could be preserved due to the cautious reconstruction. The quality of living in the five apartments had been enhanced by keeping the unique atmosphere with low ceiling heights, thick walls and the typically viennese box-type windows.

Above the characteristic cullis the roof was opened to create an attic flat using parts of the original material. The newly build annexe extends to the garden where large panorama windows open the view to dignified mature trees. It is covered with a horizontal wooden lagging like all new parts of the façade.

Part of the overall reconstruction was also the owner´s detached family home from the 1920ies. It has a flat roof and is situated in the upper, slightly elevated part of the property.

A complex procedure made it possible to build a cellar underneath the house. The façade has variable jutties and a plinth made of natural stone matching the existing terraces of the garden. The two-story house opens to the garden with room-high panorama windows situated on the corner. The basement juts out and creates a terrace on the first floor with a spectacular view on the centre of Grinzing with its ancient church spire.

The horizontal wooden lagging, which is also used for the façade of the family house, works as a link between the landscape, the existing buildings and the new parts, which are integrated in the characteristic surrounding without competing with the historic buildings. 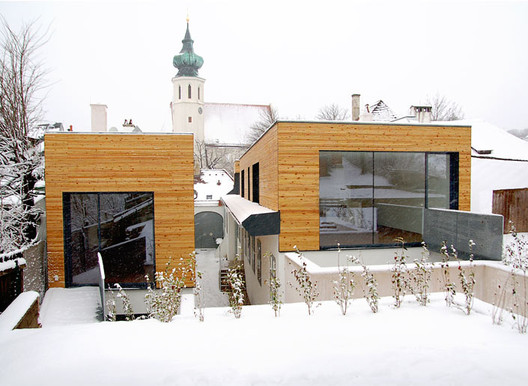