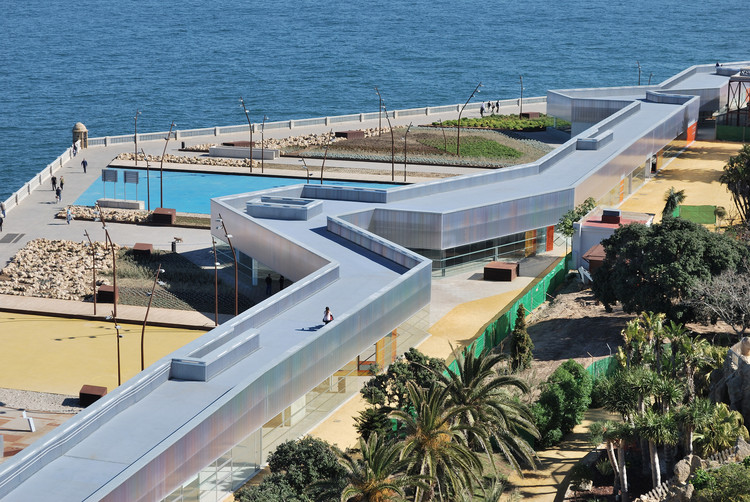 Text description provided by the architects. The project is part of the development of the winning proposal an international contest promoted by the Town Hall of Cadiz along with its Architects Association. The objective of the contest was to re-organize and urbanize the grounds of the esplanade of Santa Bárbara, which works as a fence to protect the Genovés Park against the sea. The exotic species of this park, of American origin, are declared protected heritage and require especial attention due to their close exposure to the sea. A high, masonry blank wall preserved them from rough weather and the ocean’s breeze.

This ancient wall, made of pieces and remnants with different heights, used to separate completely the park and the esplanade both visually and physically. Only an occasional door, usually locked, served as a bridge between them. The project replaces this wall by a construction which protects the park while it also allows a more permeable relationship with the Santa Bárbara Esplanade.

The esplanade on which the new building is set has been used for a long time as a car park, despite its huge dimensions and privileged location as a sea view balcony for the city. The project, as if it was inspired by the well-known graffiti by Bansky, transforms it into an extension of the park as well as an open space with landscaped zones, sport areas and playgrounds. Children play now in a site where there were only cars before.

The new planned building, which replaces the wall, has as a main objective to guarantee the protection of the Genovés park from wind and rough weather. However, it also proposes a much more transparent and permeable relationship between that park and the new Santa Bárbara Promenade. They are now thought as connected and complementary urban spaces, generating five new accesses. Furthermore, the upper level is an accessible and trafficable roof which has been transformed into a raised lookout street which looks at the Genovés park over one of its sides and to Santa Bárbara esplanade and to the Bay of Cádiz from the other one.

It is therefore a construction which integrates very different needs and develops diverse proposals, which makes it difficult to classify it into a specific architectural typology or type of project.  Certainly, the building tries to be a synthesis of several needs but also a suggestion, an installation which activates this area and interacts with people to make of this part of the city a new site for opportunities and expectations for the citizen.

The building, if such a denomination is possible, is the result of a process of negotiation with many different conditions involved. First, it had to lay necessarily on the structure of the car park which spreads underneath the whole esplanade. Consequently, the plan must adapt to those foundations which coincide with the lower structure, and so must the access points from below. In addition, the ground floor of the building houses several rooms related to cultural activities and public bathrooms as well as changing rooms and storehouse for the staff of the park, which where before precarious constructions attached to the old wall.

Other intentions of the project were generating areas of shade or relationships as well as avoiding that the building, because of its linearity and necessary extension, would seem a new wall.  Therefore, the folded formalization and the lack of scale in the elevation is not an a priory prescription, but the result of a set of functional and conceptual requirements which have been expressed through the  conditions that emerge.

The materiality searches a feeling of lightness and transparency, using glass, polycarbonate and steel. The façade, made of glass in the ground floor and of a double translucent skin in the upper level, is backlighted at night, recreating an extensive band of light opposite the bay. 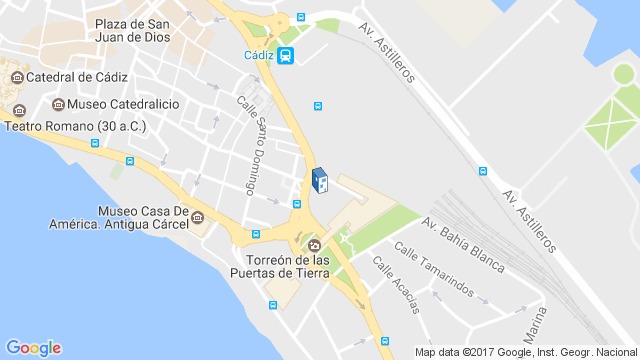 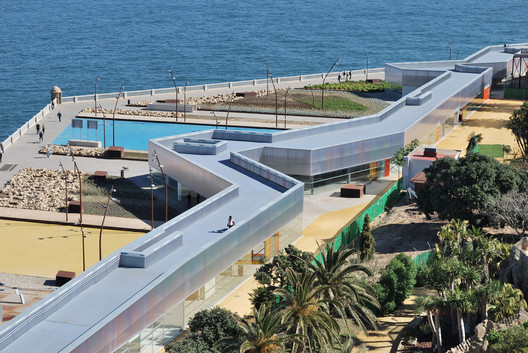