Construction is underway on a striking new tower by Morphosis Architects in Shenzhen. "A departure from conventional towers," as the practice describes, the "Hanking Center Tower" merges commercial retail with private office space through the folding of its steel structure. Beyond that, tenants are connected via a series communal sky gardens and a massive sun-lit atrium that occupies the building's core. 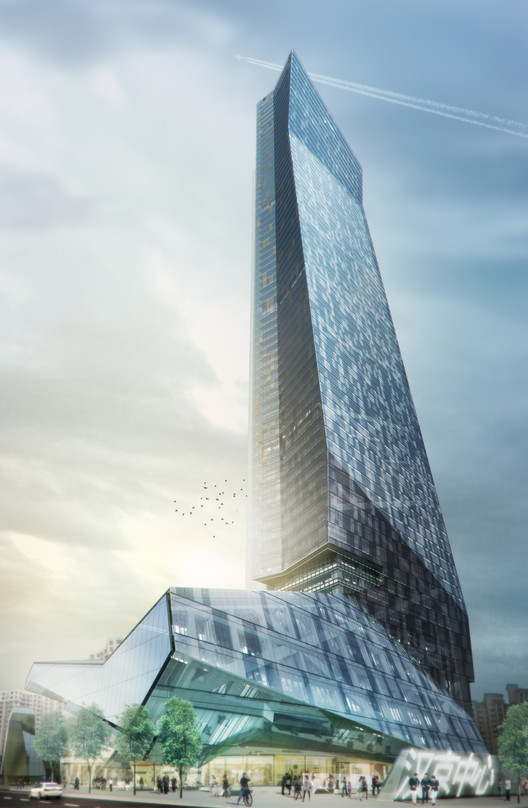 From the architects: Hanking Center Tower rethinks the traditional commercial office building through an innovative approach to circulation, social, and work spaces. Offering flexible tower office space anchored by high-end retail and dining in the podium, the Tower serves Shenzhen’s growing body of global professionals and brings density to the suburb of Nanshan.

Occupying a place of prominence on Shennan Boulevard, Hanking Tower’s slender profile redefines the local skyline. The Center utilizes folded angles to elegantly merge public components in the podium with private commercial space in the tower – a departure from conventional towers, where differing program is often relegated to separate and disjointed volumes. Surrounding the tower’s podium, a grand plaza and dimensional hardscape create a new neighborhood landmark and enhance public activity at the street level.

The form of the tower is primarily defined by its pioneering steel structural system, which offsets the primary movement and service cores to the exterior of the floorplate. Shifting the cores open the main body of the tower, significantly minimizing the building’s structural footprint while maximizing open space. Shadowing the offset circulation core, two secondary cores in the provide structural reinforcement and house private elevators for VIP users, as well as freight elevators and mechanical services. A series of sky bridges and diagonal mega-braces rigidly link the offset core to the main tower.  Glazed lobbies and skygardens every five floors create a communal hub for use by all tenants.

As the new icon for the high-tech industrial sector, the Hanking Center Tower is designed as an incubator for emerging technologies, providing for growing firms with evolving space requirements. The open floor plate, made possible by the tower’s offset core, dramatically increases space-planning flexibility and offers healthier work environments with enhanced natural light and airflow. Offsetting the core also allows for a public to private gradient of activity on each floorplate, as tenants move from circulation and social spaces around the core to quieter perimeter offices with panoramic views. Freed from the interior of the building, circulation and amenity areas gain natural light and exterior views over the city to transform from conventional to vibrant public space.