Seoul-based architecture and art practice Planning Korea has unveiled their design for a seaside resort hotel, to host visitors to the 2018 Winter Olympics in PyeongChang, South Korea. Offering 946 rooms and sprawling across a 29,493-square-meter site, the hotel will offer a combination of marine and mountain leisure activities. 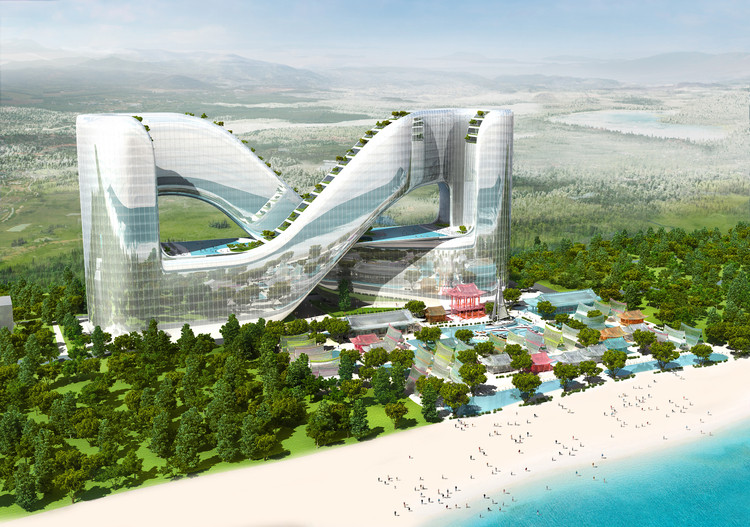 Located in Gangneung in Eastern Korea, the hotel is situated in a prime position for tourism. Neighbors include the Gyeong Po Dae pavilion and the site of the UNESCO "Intangible Heritage of Humanity" listed Gangneung Danoje festival. The resort itself is within approximately 5 kilometers from Olympic stadiums and facilities in the area, most of which are due for completion in 2016.

The sweeping figure-eight form of the resort draws inspiration from the ecological structure of the plankton, and references the project's conceptual basis of "a strip of healing or recreation." The twisted loop forms the predominant circulation space of the structure, whilst also providing a substantial space frame upon which a glass facade will be mounted.

Comprised of a combination of private condominiums and hotel rooms, the hotel will also feature a swimming pool suspended in a "belt" linking the building's dual cores. Rooftop sky facilities will adorn the hotel's top level, while LED lights at lower levels create a media facade.

Approaching ground level the structure assumes a form evocative of Korean traditional housing, the Hanok. Planning Korea hope to "form a village" using these modernized versions of the traditional typology, interspersing restaurants and retail outlets in their midst.

It is envisioned that the resort will allow "activities, recreation and healing within the [sic.] nature" during the 2018 Winter Olympics, after which point it will be used for conventions and other events.