Save
Le Corbusier: Ideas and Forms
Share
Or
Copy

Marking the 50th anniversary of Le Corbusier's death, Phaidon recently released a second edition of William J R Curtis' seminal book, "Le Corbusier: Ideas and Forms." Following in the footsteps of the first edition published in 1986, the book reveals Le Corbusier's works through over 500 images and incisive analysis. The context within which the book will be received is of course very different compared to that of 1986; in the following text, the author explains how Le Corbusier's legacy has changed in the intervening years, but also why the book is needed just as much now as it was back then.

From the Preface to the Second Edition of Le Corbusier: Ideas and Forms:

When the first edition of this book was written Le Corbusier had been dead only twenty years. His reputation was in temporary eclipse. Demonized by post-modernist foes and over-simplified by neo-modernist friends, he risked becoming a caricature. At the time it was necessary to rescue him from transient perceptions and to place him in a longer and broader historical perspective. While focusing upon individual works I attempted to reveal Le Corbusier’s recurrent themes, basic types and guiding principles. His architecture was placed in the context of his larger social and cultural projects and related to his general conceptions of society, history and nature. The first edition closed with the declaration: ‘Le Corbusier is himself part of tradition and has even altered the perspective on the distant past. As he slips further into history, his modernity matters less and less: it is the timeless levels in his art which have most to give to the future.’

Today, over a quarter of a century later, the long-term relevance of Le Corbusier is no longer in doubt, although there are clearly many ways of ‘re-reading’ and transforming his example. If anything the problems now stem from uncritical acceptance. Le Corbusier has been canonized as an unquestioned saint by the modern cultural establishments in academia and the museum worlds. Like Picasso, he has even been popularized by curators as a form of entertainment. Guided tours of his buildings are accompanied by set-piece legends while attributes such as the Modulor, the Cabanon and the horn-rimmed glasses have become props in a modernist theme park. The brand ‘Le Corbusier’ has proved profitable for the furniture and design industries. The mediocrity of some of his paintings has been overlooked to sate an appetite for easy narratives and even to suit an art market that exploits a lack of critical discrimination.

As for the architecture, this too risks being reduced to a repetitive set of interpretive clichés. This facile hagiography ends up trivializing Le Corbusier by removing him from the realities and forces of history.

Paradoxically, all of this attention does not necessarily result in fuller understanding of Le Corbusier’s work. He is easy prey for those who need to knock up a quick article or thesis illustrated with downloaded images and rapidly reproduced documents from the archives. The publication of his design process sketches (now available on disks but without a proper catalogue raisonné) has not always been accompanied by insight into what they reveal as evidence. In a sense Le Corbusier has been the victim of his own success, as he obsessively preserved every letter, drawing and photograph for posterity. But quantity of information is one thing, quality in the writing of history another. With the first edition of the book it was necessary to side-step Le Corbusier’s own version of himself and to remove him from standard modern myths and post-modern polemics. With the second edition it has been necessary to cut through a mass of sometimes irrelevant details and to refocus attention on the works themselves, submitting them to a deep reading and delving further into their intentions and structures of thought. The book is concerned more than ever with the genesis of forms.

The vast volume of documentation on Le Corbusier’s activities has been accompanied by a shift in historical fashions in favour of the reception of his buildings and their reproduction in the media. There has been an obsession with simulacra at the expense of original works. Entire monographs have been devoted to individual projects that discuss almost everything except the architecture. Biographies are constructed that fail to deal satisfactorily with the always complex links between personality and art. Le Corbusier lived a life, had political views, painted pictures, wrote books, but he was first and foremost a designer of extraordinary buildings and it is his architecture that continues to be the main focus of this study. With this in mind, the second edition of Le Corbusier: Ideas and Forms has done more to evoke the visual and physical qualities of the works themselves, including their relationship to site and landscape. Earlier historical images are accompanied by my own photographs. Together these reveal different ways of looking at Le Corbusier’s buildings. Great emphasis has been placed on drawings, not just for the evidence they supply, but also for their visual quality as documents.

Architecture speaks its own language in silence and touches the mind and senses on many levels. What no photograph can recapture is the feeling of moving through spaces of different intensity, the touch of materials or the unfolding of views. Just when the historian is settling into lazy definitions it is as well that he be jolted by the unexpected discoveries in the realm of architecture itself. Over the years I have revisited Le Corbusier’s buildings often, meditated upon them, been surprised by them, and always found something fresh or unexpected. How many times have I wandered under the piloti of the Pavillon Suisse; walked up the ramp of the Villa Savoye; been moved by the mysterious light of La Tourette; or astonished by the view of landscape and horizon from the roof terrace at Marseille? How can I forget revisiting the airy halls of the Sarabhai House in Ahmedabad or clambering once again over the surreal roofscapes of the monuments in Chandigarh? To me Le Corbusier’s buildings are like old friends, ever revealing new aspects of themselves; ever changing, but somehow the same.

Preface to the First Edition

Preface to the Second Edition 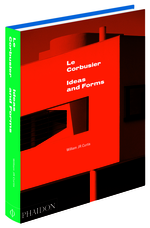