Mecanoo and Ayesa have broke ground on its "Palace of Justice" courthouse in a residential area of Córdoba, Spain. The first-prize winning proposal of an international design competition in 2006, the project was significantly delayed by the area's economic instability. Slated for completion in 2017, the building aims to unify the neighborhood's mix of contemporary and historic influences while providing essential public services for the region. 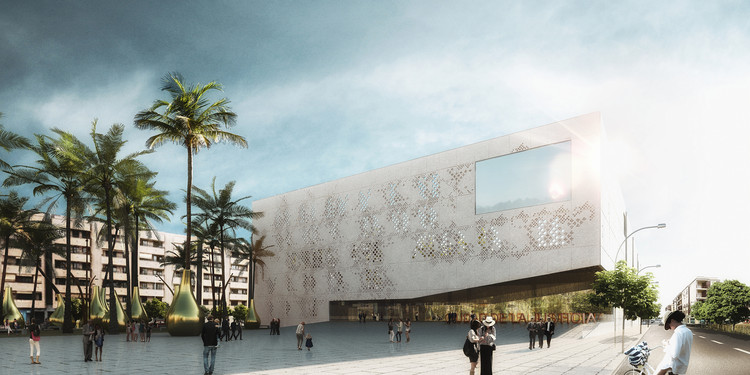 The Palace of Justice draws inspiration from Córdoba's past and present. It derives its stylistic influences from the region's Moorish roots, while putting a contemporary spin on the execution through playful details such as colored ceramic panels. Integrating elements of the old city section, the modern form is punctuated by traditional courtyard spaces that provide both ample daylight and natural ventilation throughout the volume. The insertion of vegetation enlivens the courtyards and incorporates moments of nature within the building's perforated concrete form.

Influenced by its program, the Palace of Justice follows a public-to-private scheme as occupants move vertically. At the ground level, visitors are ushered through the main entrance via an open public square leading to the courtrooms, marriage registry, and a restaurant. Located above, the high-security offices maintain a level of privacy, while the area below ground houses the archives and jail cells.