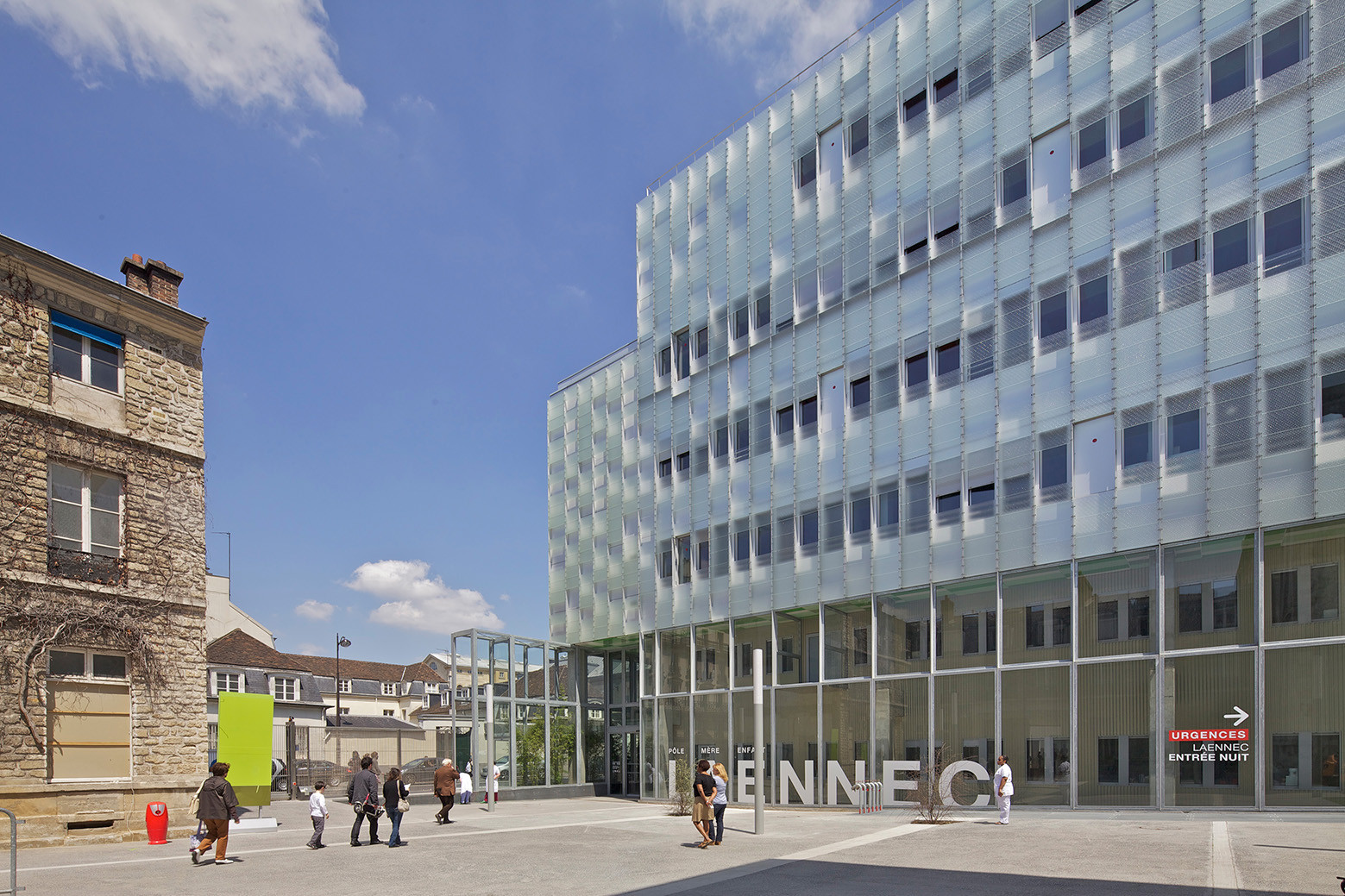 Text description provided by the architects. The Laënnec building has a capacity of 404 beds including 120 for intensive care and intermediate care in all paediatric disciplines. The main medical functions are grouped by complete levels and share the same equipment and doctors. Despite the contextual difficulties, a compact emergency platform: On the upper ground floor, paediatric emergencies (70 000 emergencies per year) will be located beside the imaging department, contiguous with the reception of polytraumatised patients, which is next to the recovery room, alongside the 14 operating theatres in the main paediatric surgery block. The medical and technical platform includes paediatric imaging, operating theatres, post-surgery monitoring rooms and the catheterisation laboratory, making a total of 20 procedure rooms. It is shared between the various disciplines, with a permanent focus on efficiency and optimisation of resources. Combined intermediate care and intensive care: On the 1st floor, the surgical intermediate care beds are grouped next to the intensive care beds, forming a homogeneous unit of 67 beds with direct vertical link to the operating theatres and the medical intermediate care beds adjacent to emergencies.

Asphyxiated site. The land planned for construction of the new Laënnec building is located on the Necker hospital for sick children site. The landscape of the Necker hospital for sick children is striking through its diversity: of scales, modenatures, colours and materials of the buildings, placed side by side with no attempt to create unity or integrate in the existing architectural and urban environment. The various types of relation with neighbouring constructions and plots are ignored. The hospital developed and expanded with no long-term logic, no global plan since the merger of the two hospitals, Necker and Enfants Malades, in 1926.

Metropolitan opportunity. While the built-up landscape on the outskirts of towns changes at high speed, the major urban centres like Paris seem to have exhausted or abandoned their potential to innovative and renew. The desire to install architecture in a metropolitan reality considered as a living environment offering unlimited changes comes up against the fear of imagining the contemporary city without nostalgia. To reverse this trend, all opportunities for renovation and urban transformation must be grasped and explored, especially those concerning the major institutional sites in town centres, to retain and develop their activities while continuing to build the town on the town.

Restructured site. Necker hospital is stifled inside an enclave completely closed in on itself. In this case, the urban operation consists in triggering a vast and necessary upheaval to remedy this lack of relation and open the hospital onto the city more widely, while radically metamorphosing the site to allow in-depth renovation. After first demonstrating that the vital proximity constraints required by the medical project could usefully direct and support the choice of a more urban position for the new building on the Duroc junction, studies then focused on exploiting the potentials offered by demolishing all the building cluttering up and stifling the centre of the plot. Releasing a vast exterior space in the centre of the island, made feasible by locating the new project on the junction, creates three parallel assemblies, two strips built each side of a large central garden. This radical new urban scheme improves the overall vision by deliberately integrating the architecture of the old buildings kept, stressing the importance paid to the exterior spaces, and gives the central garden a key role in the site remodelling. Locating the project at the corner of rue de Sèvres and boulevard Montparnasse offers the new hospital maximum legibility over the district.

The hierarchised treatment of the various volumetric entities redefines the image of the hospital on rue de Sèvres. The opening to the exterior makes a strong impact at the junction, giving an immediate and obvious picture of the hospital from the public space. The project is also highly structuring in the long term, open to future development not based, as has been the case until now, on piecemeal availability of land opportunities. This demonstrates the ability of a pragmatic and reactive architectural vision to regenerate a large condemned institutional urban site, progressively decaying, in the heart of Paris. It is also a negotiated and balanced project insofar as the demolition of some run-down and unsuitable buildings, is more than compensated by the rehabilitation and show-casing of the most interesting historical heritage within the new site plan. Finally, this project saves ground space by offering, in the very heart of the site and the district, a landscaped park of almost one hectare in natural ground, after having built twice as much surface area as was demolished. 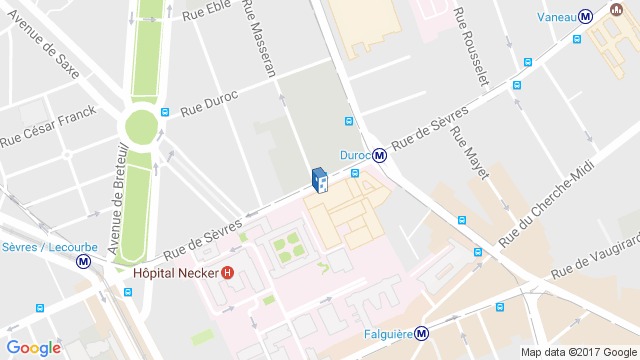 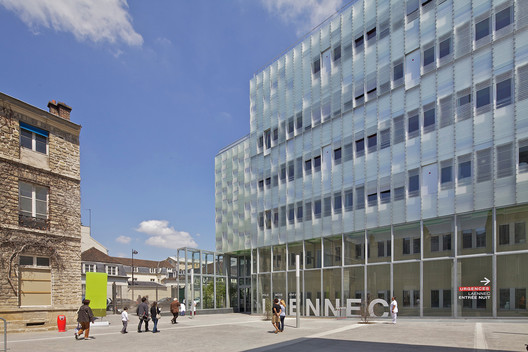