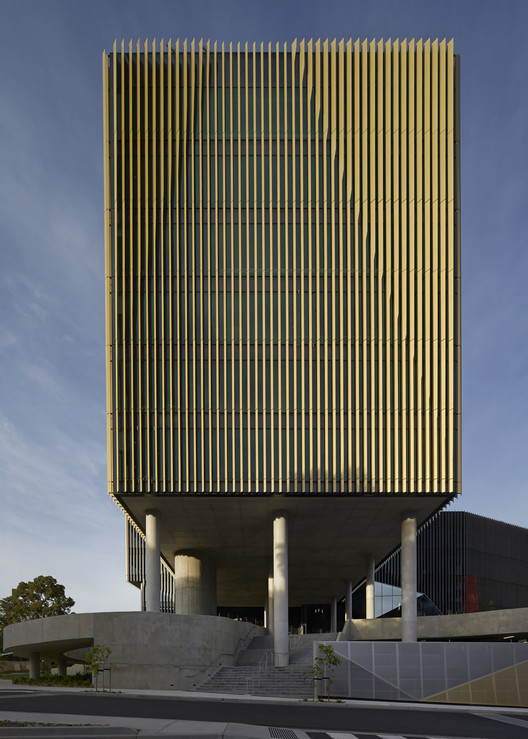 The Burwood Highway Frontage is an eight-level tower connected to a five-level podium building, running between the two main entrances of Deakin University in Melbourne. Envisioned as a pivotal building for the campus, the architectural intention centred around two key concepts: the spatial composition required by the functional brief, and the client’s aspiration to create a gateway building for the campus.

In order to achieve these two intersecting briefs, the building was oriented away from the southern edge and the highway, creating two north-facing courtyards that act as social gathering spaces for the public and university community, while also reinforcing and extending the landscape nature of the Burwood campus.

With a gross floor area of approximately 17,000 sqm, the massing for the building was significant, especially juxtaposed with the much finer, residential urban grain of Burwood. This was broken into two clear forms: one taller in gold to accentuate the entry into the campus, and the other in contrasting silver to hold the edge of the main road and respond to the public realm. This colour scheme sought to expand on the typology of building stocks much like those in Brasília where entire building façades are clad in a single colour of monolithic louvres. Keeping the coloured finishes to essentially two strengthens the main building forms and their presence to the campus.

The general concept of the base structure is in line with Le Corbusier's Maison Dom-ino, allowing free-form planning to occur throughout building. A significant amount of in-situ concrete was used as a finished surface.

Concrete was also a key ingredient in the creation of the flowing landscape forms that constitute the public realm. Applying a crisper material like aluminium for the louvres to the majority of the provided a strong contrast with this abundance of brutalist concrete. The number of materials used was reduced to create a monumental architectural language.

The interior was considered as a new academic workplace, providing high level research spaces for the Faculty of Health that are more akin to contemporary workplace environments than a traditional, cellular layout. The design also provides task, social and rest spaces; promotes collegiality; and connects departments, students and faculty within the building.

The provision of two external courtyards provided the opportunity to improve connectivity and activity, increasing collegiality on campus. Additional elements include car park, facilities such as a public art gallery, library and café, and a landscaped area that encourages public and university community gathering. 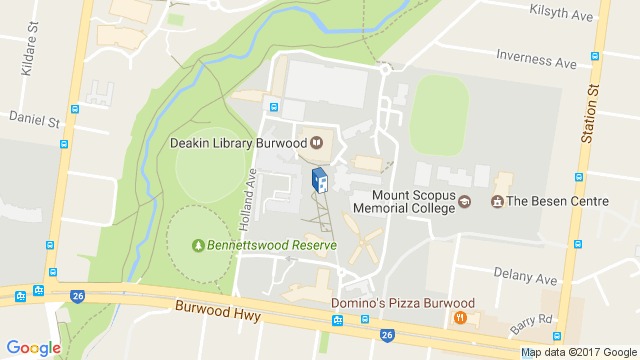 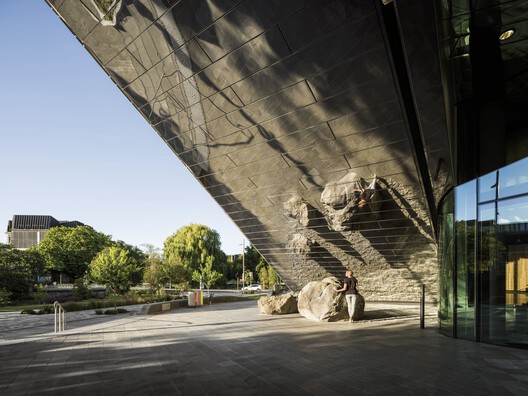