This time last year, Hungarian Prime Minister Victor Orbán stood at a podium in a pristine new subway station. Raw concrete beams criss-crossed above him; state-of-the art, driverless trains stood silently beside him. It was the opening ceremony for Line 4, a subway line that due to delays, corruption, and disputes had been 40 years in the making.

“The people of Budapest began to accept the thought that only their grandchildren would use Budapest’s new Metro line, or not even them.” Orbán told the crowd. He recounted an old joke that embodied the cynicism that once surrounded the project: Chuck Norris had been on Metro Line 4.

Orbán credited the line’s completion, which occurred only a few weeks before the 2014 parliamentary elections, to “the solidarity and unity that was established in 2010 [when Orbán’s government took power] and has since been maintained.” He didn’t mention how, under his first government (1998 to 2002), he had withheld funds from the project, contributing significantly to its delay. Nor did he mention that his party had fought against the idea that the line, an expensive infrastructural project, needed architecture at all. 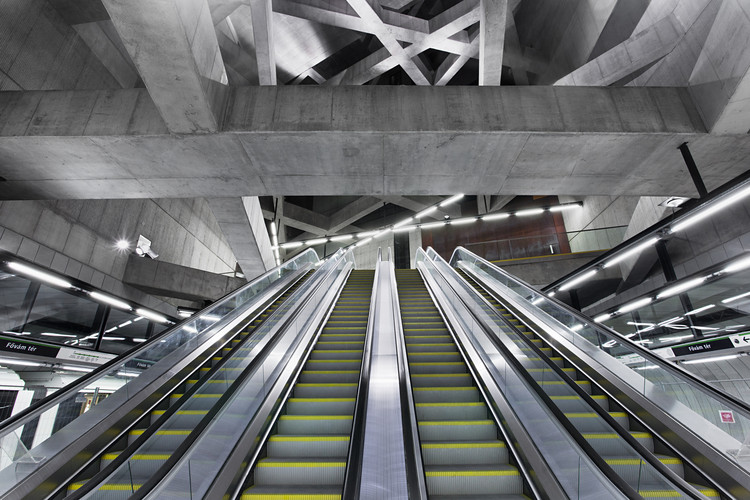 Although initially proposed in 1972 (and then postponed in favor of extending Line 3), Line 4 was once again taken up in 2003, after Orbán’s first government ended. From the beginning, the project was steeped in controversy. Critics dismissed the line, conceived by engineers in the 1970s, as no longer relevant. Why connect the wealthy neighborhood of Buda to the city center when increased connectivity between the north and south is what’s needed? Moreover, if the line was meant to encourage users to abandon their cars, it would fall far too short — suburbanites would still need to drive to the furthest metro stops. The biggest criticism by far, however, was over the price. In the end, Line 4 cost 1.5 billion Euros ($2.07 billion), or 1.5 per cent of Hungary’s GDP.

With all these complications, architecture, it was said, would be a frivolous add-on, augmenting the already considerable costs. After all, no metro project in Hungary had ever used architects before: why start now?

Nevertheless, István Schneller, the chief architect of Budapest from 1994 to 2006 (when he left to start an urban planning course at Corvinus University), knew this was an important opportunity for an architectural intervention. Rather than another dark, unassuming line, Metro Line 4 could be a beacon of modernity and light, a way of signifying Budapest’s transformation into a 21st century city. With Mayor Gábor Demszky’s support, Schneller organized an open competition, calling on firms to submit their visions for the line.

In an interview with ArtsCultureBeat, Schneller, who was head of the jury, explained: “It was one very important goal that it should be of high quality and contemporary design. My personal idea is that investments from the public side have to be on a very high level because it can show an example to private investors or to the population that contemporary architecture doesn’t mean bad quality, it’s good quality architecture.”

Schneller, and the Metro, had a job to do: convince Hungary that contemporary architecture was something worth fighting for.

In the January/February 2015 edition of A10 magazine (which covers European architecture today), guest editors Levente Polyák and Dániel Kovács of KEK (Kortárs Építészeti Központ), Budapest’s first Contemporary Architecture Centre, report on the state of architecture in Hungary today. They explain that the market for contemporary architecture in Hungary is tiny; while many young Hungarian designers have chosen to leave the country to work abroad (a trend that extends beyond architects), those who stay have had to become inventive to find work. Thus, although contemporary buildings are few and far between in Hungary, small-scale interventions are rampant in Budapest’s architectural landscape, from the takeovers of dilapidated buildings (the now ubiquitous ruin pubs) to pop-up shops and renovated interiors.

Why? The answer lies in the twin events of the economic crisis in 2009 (which decreased the availability of private money for construction) and the re-election of Victor Orbán to government with a conservative supermajority in 2010, which altered the political and cultural landscape in Hungary significantly. While anti-EU rhetoric became commonplace, “authentic” Hungarian art forms were lauded. In the architecture world, this resulted in an eschewing of contemporary “European” design and an embrace of “organic architecture,” a style founded by Hungarian architect Imre Makovecz.

Makovecz gained notoriety in the country for rejecting the uniform style and mass production of Soviet architecture in the 1980s and ’90s. He used natural materials to construct unusual buildings that were inspired by Frank Lloyd Wright, natural forms (hence the “organic” moniker), and Hungarian folk art (particularly from the formerly Hungarian part of what is today Romania). In 1992, after the fall of the Communist party, Makovecz and 21 other major figures in Hungarian arts and culture founded the Hungarian Art Academy (MMA) to promote the appreciation of Hungarian art; until 2001, Makovecz was the organization’s director.

Today, under Gyogy Fekete, the MMA funds “nationally minded,” conservative art and (mostly organic) architecture with government money. One of the latest such projects is a 4,500 seat football stadium in Orbán’s hometown of Felcsút (population: 1,700). The stadium was designed by Tamás Dobrosi, a disciple of Makovecz and a proponent of the organic style. For architects interested in contemporary design, however, funds are less forthcoming.

In 2005, a group of young, internationally-minded, and frustrated architects, who had grown up after the political changes of 1990 and had been exposed to international architecture via the internet, penned a manifesto. They declared it “crucial to enhance the integration of Hungarian architecture into international currents” and began handing out flyers. Soon they began hosting events such as architecture film festivals and Pecha Kucha nights, and — although they didn’t have the resources to own their own physical space — they called themselves the Contemporary Architecture Centre (KEK). Levente Polyák, KEK co-founder, told me they have had to be wily to survive; today, less than 10 per cent of their funding comes from Hungary’s government. Group members prefer it this way — it keeps them independent and resilient.

While KEK was spreading its message throughout the city, striking a chord with Budapest’s liberal youth, four KEK members, the founders of a young and experimental studio called Sporaarchitects, found themselves in a most peculiar situation. They, practically card-carrying members of the architectural anti-establishment, had been asked to take part in one of the biggest and most controversial projects in the country: Metro Line 4.

The winning team of the Metro Line 4 design contest was a small studio, PALATIUM, which had never undertaken a project of this scale before. Orsolya Vadász, now a partner at Sporaarchitects but who was at the time a young architect at PALATIUM, assumes to this day that the small firm won the competition by “breaking the rules a little bit.” The original plans had called for structural columns to dominate the underground space; PALATIUM’s proposal was to turn the columns into horizontal beams, thus turning the underground into an open, public space.

The jury suggested the winning team collaborate with the second- and third- place winners: Budapesti Építészeti Műhely and Antal Puhl. In the end, PALATIUM's managing director Zoltán Erő, cognizant of the advantages of collaboration and networking, also brought two more firms on board: Gelesz & Lenzsér and Sporaarchitects. As the line included 10 stations, the five different contemporary studios were charged with designing two each. The results range from the spray of mosaic stripes spiraling along the curved walls of the Szént Géllert ter station (designed by the artist Tamás Komoróczky in collaboration with Sporaarchitects) to the bright rectangles of primary colors arrayed above the platforms at Móricz Zsigmond körtér station (Gelesz & Lenzsér studio) to the oblong geodesic dome that marks the futuristic entrance to Bikás Park station (PALATIUM).

Ádám Hatvani, one of Sporaarchitects’ four founding members, recognized the project’s pitfalls, but felt that a strong design could redeem it. “As an architect you know that this project as a transportation project is… not good, let’s say, or will not work very well. But if you don’t design anything, it will be worse. We saw that if we made clear contemporary architecture with light and huge elegant spaces, the passengers will like it,” he said. “The role of the architecture is somehow to ‘legalize’ the project.”

It did. Sporaarchitects’ Fővám Ter station, which has won numerous architectural awards, makes clear the value of including architects in a project such as this. Minimalist glass and concrete structures above ground filter light below, where heavy, raw concrete beams zig-zag above a cavernous, plunging, light-filled space. Emiel Lamers, the author of the recently published book Contemporary Architecture in Hungary (which features the station), told me that the design’s strength lies in one simple idea: to criss-cross the structural beams rather than keep them straight: “That’s a very strong idea, actually a very simple idea, but the effect is amazing,” he said.

That Metro Line 4, the largest scale contemporary architecture project in Hungary’s history, was completed under Orbán’s nose, and with his authority, is a remarkable anomaly in a country where contemporary architecture has been confined to the realms of trendy renovations and temporary installations. However, it may have been because it was under Orbán’s nose (and all Hungarians’ noses, literally) that this project saw the light of day. As Hatvani confided in our interview, he is used to his projects being interrupted, delayed, or otherwise challenged by curious on-lookers; once construction on the Metro began, however, the critics soon forgot about the changes happening underfoot. The result was rare, creative freedom for the young architects — and a remarkable gift to Budapest.