For generations, nature has been held up as something to respect, to take inspiration from, to place at the center of architecture. Few new designs today are complete without some visualized parkland or tree placed implausibly high up on the latest visionary high rise development. But what do you do when nature ups and leaves? How can architecture respond? That’s the question that Mateusz Pospiech’s master’s thesis, completed at the Silesian University of Technology, attempts to answer by taking the severe example of the disappearance of Iran’s Zayanderud River and proposing the equally incredible solution: an enormous, six-kilometer-long ecologically sustainable megastructure along the dried riverbed, healing the scar both in the landscape and in the minds of Iranians. 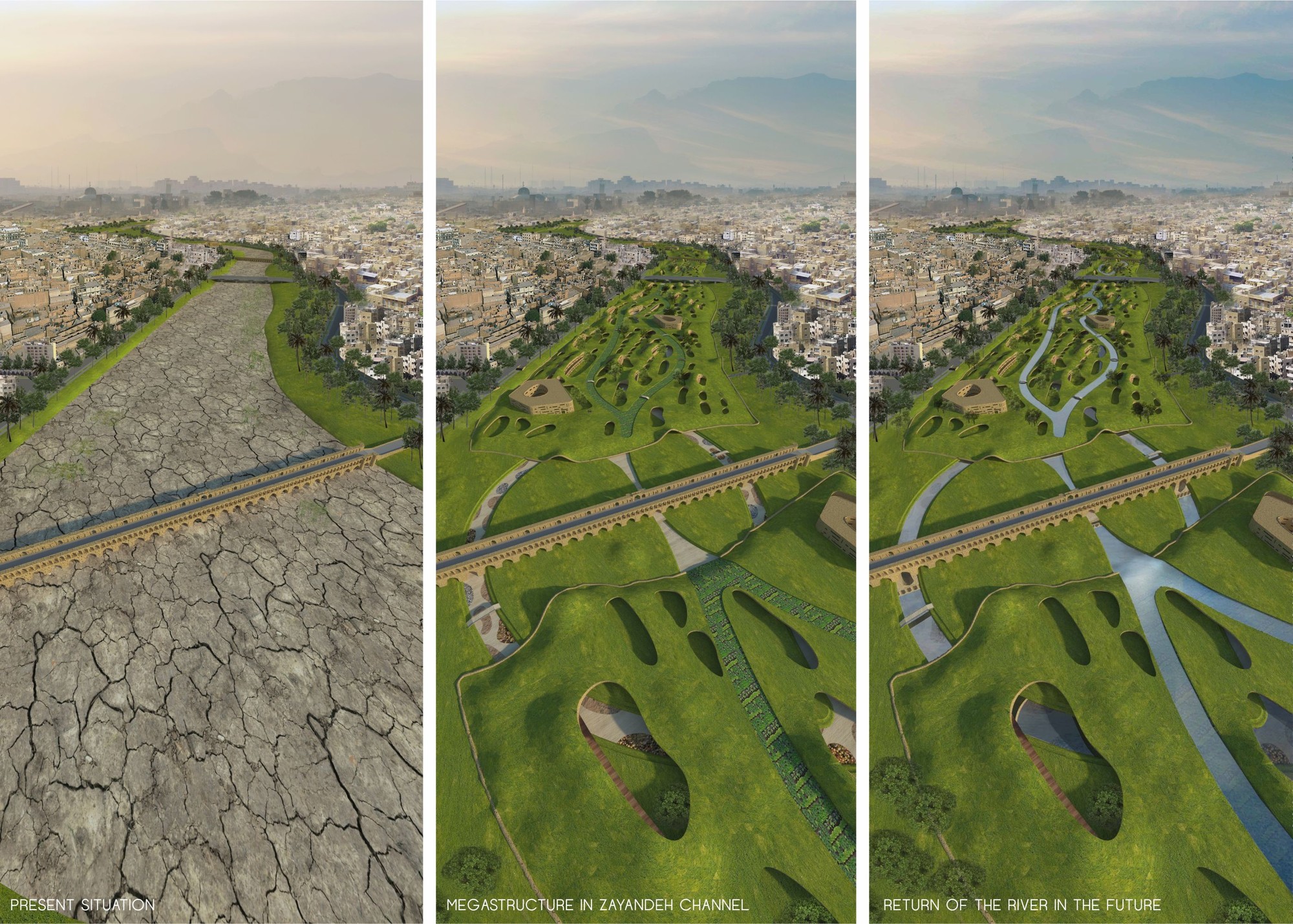 The Zayanderud River was the largest in this area of central Iran, and the river’s waters are absolutely essential to settlements here, not least to Isfahan, Iran’s third largest city with a metropolitan area of over 3.7 million people. The river’s very name means "life giver"; it informed the existence of Isfahan and allowed it to grow as a cultural and economic center into the capital of Safavid Persia. The disappearance of the Zayanderud from Isfahan is a huge blow to a city which has long defined itself as an oasis of parkland and fertility, not to mention the numerous Safavid and older bridges that cross the former river, which are beautiful examples of Persian architecture.

It’s this river that Pospiech makes the center of his proposal, using it as a metaphor to inform the character of his proposed megastructure. The Riverbed project is a way to use the dry riverbed as useful space to heal the wound left by the loss of the Zayanderud while still - crucially - making provisions for its eventual return. The solution is to create a structure on three levels, each with a channel carved through it in preparation for the river’s return, in order to literally weave the returned river into the fabric of the structure and the city.

The ground level would serve as a large housing development, something necessary in a city still rapidly growing and developing, with the city soon to finish its first metro line. Above this would be a "green cover" and public park, which would connect the two riverbanks with public space, and below ground level would be a suspended tram system and public car parking space available from surrounding streets.

Each level’s river channel is capable of functioning without the return of the river in order to avoid a scarring empty space simply waiting for it. The underground channel follows the path of the suspended tram tunnel (a clever way to use both at once) while the ground level channel becomes a ‘landscape alley’ for the inhabitants of the housing there. On the top level, the channel functions as a very long allotment for growing herbs and vegetables.

More than most, this proposal must be ecologically sound: you can’t replace a river lost by poor management, irrigation and climate change with a megastructure that wastes even more water. The "green cover" of the upper area functions as a sunshade during the more arid summer months, while in winter months it allows more light into the lower areas. The whole development is built using traditional, low impact materials (manufactured without using the steel plants that have used a great deal of the Zayanderud’s water) using a system of reinforced concrete frames and mudbrick, something that has the added bonus of aiding the creation of interior microclimates with the breathable nature of mudbrick. Most importantly, the green areas of this project are managed using efficient drip irrigation, and the whole scheme uses a comprehensive water conservation and recycling scheme.

Pospiech states that his aim is to create an ‘evolution’ of the Zayanderud, rather than just build over it and wipe it from the memories of citizens. While some may question the proposal to use water hungry grass considering the importance placed on water recycling, the project clearly puts care into recognizing the river as part of the identity of Isfahan. And though Pospiech may not want the citizens of Isfahan to forget about the river, this project could offer them something a little more functional than a parched channel in the meantime.