The American Institute of Architects (AIA) has revealed six libraries they believe to be the year's best. In collaboration with the American Library Association (ALA), the AIA/ALA Library Building Awards are intended to promote and honor exceptional designs in library architecture. Taking into account the evolving role of the library, these six award recipients are believed to have elevated the institution to one of congregation and community-specific programs.

See the winning designs after the break. 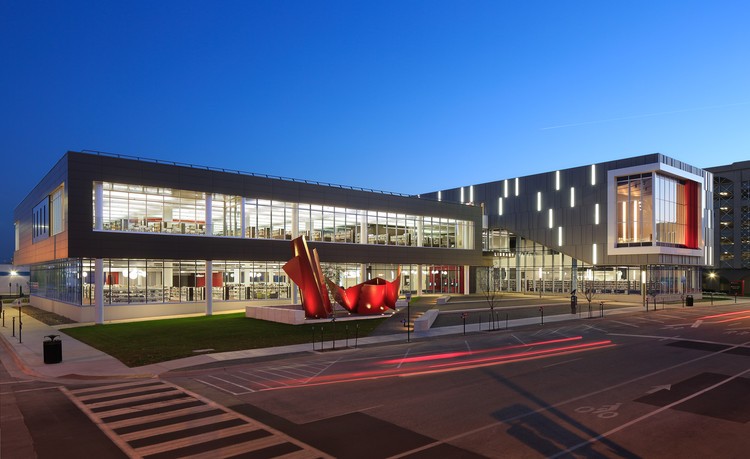 Designed to LEED Platinum requirements, the building features abundant natural light, a geothermal system, and daylight harvesting strategies that minimize the building’s energy use. The green roof and use of permeable pavers across the site allow the building to retain 90% of all annual rainfall on site in underground storm water collection chambers. Inside, a spacious two-story lobby brings together all of the core patron services in a hub and spoke system. A motion-activated light wall dramatically highlights the monumental stair. Out are the imposing book stacks, the massive circulation desk and the security systems at the doors; in are shelves capped at 69 inches tall (48 inches in the children's department), friendly checkout kiosks scattered throughout the building and a busy café / coffee shop. A 24,000-square-foot publicly accessible green roof is a prime spot for library programs and community events.

The dramatic transformation of the 170,000-square-foot Mid-Century Modern academic library at the University of Massachusetts Dartmouth (UMD) was accomplished in less than two years while it remained in full operation. The library was originally conceived by Paul Rudolph as the centerpiece of his visionary utopian commuter college, which was built in its entirety between 1962 and 1974. Once celebrated as one of the best Brutalist buildings of its time, the library since proved grossly dysfunctional, underserving the University’s current pedagogic objectives. UMD and the dean undertook a radical re-planning of the entire 5-story building to create an “intellectual and scholarly hub” for the campus. With half of the collections relocated to basement storage, the creation of a wide variety of new service and collaborative work spaces and the addition of a glass enclosed “campus living room”, the Carney Library is now the most popular place on campus, as evidenced by a gate count that has tripled.

This community embedded, supportive learning center offers not only books and performance space, but also a teaching kitchen, greenhouse, vegetable garden, and an arboretum that allow children to cultivate, harvest, prepare meals, and sell produce in a planned farmer’s market. It is the state’s first library holistically imagined as a children’s education destination. The lobby’s smart monitors display real time water and energy consumption. Mechanical and structural systems are purposefully exposed so operations and construction methods can be discussed. While this library exceeded expectations by achieving LEED Gold, the true measure of success beyond points is the neighborhood’s feel, which shifted from dangerous to full of life and pride. The library is a safe zone and home to a sustainable-minded community.

Since its opening, this library has been a catalyst and model for new development along the newly formed Roosevelt Avenue Corridor district. The library is a single story building with a 30-foot tall reading room and a shed roof that is covered with locally made barrel vaulted clay tiles. Visitors enter the new library through a pair of over-sized copper clad doors that are embossed with a decorative pattern pulled from Mission San Jose. The L shaped lobby is capped by three brick bovedas which are cross vaults built without centering by local craftsmen. The interior brick bovedas are mirrored on the exterior roof of the lobby volume with stucco clad vaults each with a skylight illuminating the lobby space below. The exterior of the building features a locally sourced San Saba Sandstone wainscot that wraps the entire perimeter of the white stucco walls. These materials reference the materials found on the adjacent Mission San Jose and convey the cultural history of the site. The New Mission Library was designed and built to LEED Silver Certification standards.

The new public Slover Library is a restoration of the 115-year-old Seaboard building (a former courthouse and city hall), a new seven-story glass walled addition, and a renovation of an adjacent commercial building, the Selden Arcade. Seaboard’s interior cortile, a central court surrounded by an arcade and a ring of enclosed rooms, is mirrored in the design of the glass addition. New arched openings along the western wall of the Seaboard building open to the new space making Seaboard’s interior accessible to library patrons. Natural light weaves through the new building to unite an interior realm with the exterior public realm of the city. The library embodies the principal roles of today’s library: as a treasure house for the region’s history and artifacts, as a portal to digital access, and as a community gathering place for the diverse citizenry of Norfolk. Slover Library reflects a synthesis of the old and new: the solidity of the restored masonry Seaboard and the transparency and porosity of the addition.

This new five-story urban public library redefines what a library can be by not only increasing services with a larger facility, but in playing a central role in the resurgence of a city’s commercial core. A ‘drawer full of knowledge’ metaphorically describes the design concept, with a dramatic multi-story glass atrium serving as an open drawer exposing the library’s contents and encouraging exploration. Way finding to the collection is integrated into an adventurous stair and graphic ‘knowledge wall’, immersing patrons in the experience of using and navigating the building. A structural system with large open areas and raised floor allow for easily rearranged spaces. Material selections such as glass, concrete and terracotta rain screen link between new and historic neighborhoods, while offsetting regional climate realities of rain and overcast days. The LEED Gold library provides performance efficiency and is an inherently adaptable structure that represents a holistic approach to sustainability addressing changing demands with regard to environmental, social, and educational functions far into the future.