With Santiago Calatrava’s unfulfilled Chicago Spire amounting to just a (costly) depression along the Chicago River, what was to be the second-tallest building in the world certainly has not established the legacy it intended. However, following the site’s relinquishment to local developers Related Midwest, it may yet have a meaningful impact on its community. Six Chicago-based firms of various disciplines have developed designs to make use of the "hole" by injecting a public program into the abandoned site.

Check out the inventive proposals, with ideas from firms including UrbanLab and Solomon Cordwell Buenz, after the break. 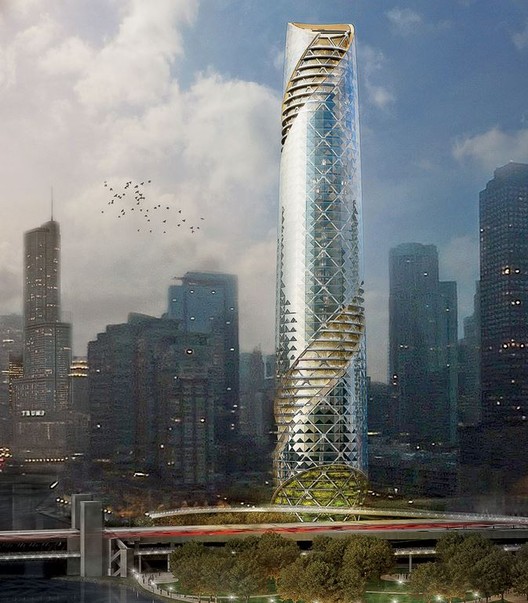 Embracing the depth of the existing hole, the Underground Amphitheater uses it as the framework for a seven-level subterranean auditorium to present a new cultural hub. By doing so, the music is contained and does not travel to neighboring buildings. As Dufresne explained, “By building the venue into the foundation hole, you’re emphasizing a phone-in-the-ground effect of having to put your ear up to it to get the full sound.”

Inspired by Chicago’s location along the migratory path of millions of birds, this design rises 10 stories from the foundation hole to provide a steel and wood aviary trellis situated within a picturesque grove of native vegetation. A neighboring elevated pedestrian path encourages visitors to bird-watch without interfering with their habits, making it a place for peaceful recreation. “It’s an oasis in the middle of the city, not only for people but for birds,” described Schaudt.

Utilizing its location near the river, the Urban Island uses the foundation hole as a source of green energy, outfitting it with a ­water filtration system and hydroelectric turbines to contribute to the city’s power grid. Elements of community involvement are achieved through an art gallery housed within the abstract building form, a bike and pedestrian bridge, and an underground market.

Acting as a lighthouse to the area’s bicycle community, the Chicago Beacon’s 1,280-foot high glass form revisits the site’s original intent by providing condos. The structure's façade peels away to support balcony gardens for residents, while its location within a parkland makes it a community hub, inviting cyclists and tourists to its base. A light on the rooftop provides the lighthouse aspect, illuminating the structure from afar.

Envisioning the foundation hole as a vessel, this design creates a two-acre community gathering point via a continuous pool. Around its perimeter, a shallow wading pool transitions visitors into the aquatic environment, leading into a waist-deep circle, and finally a 76-foot-deep central pit. Pulling water from the neighboring lake, the pool employs a water conservation system as it is then cycled back into the river.

In this design, the foundation hole is used as a data storage center, filling it with a network of high-speed fiber-optic cables. The center’s temperature regulation is maintained through a continuous current of cool water from Lake Michigan, which is returned to the surface as it is heated to provide the public with a community hot tub.