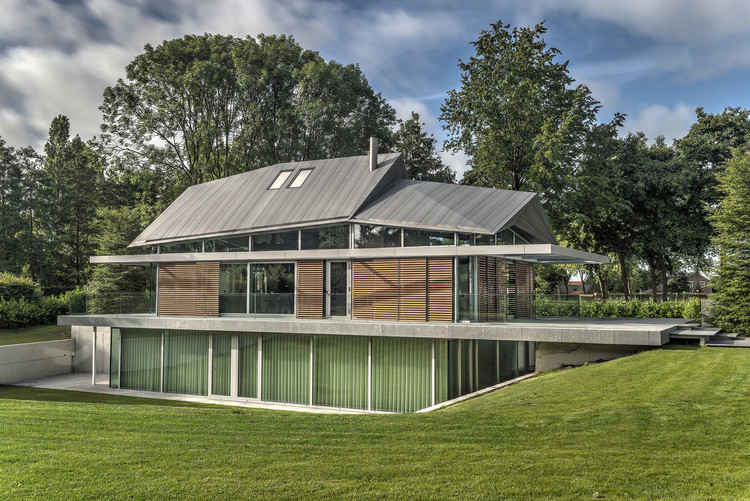 Text description provided by the architects. In the transition region of a typical Dutch village and the cultivated agricultural landscape, on a plot of approximately 6 ha is the ensemble a modern villa and a horse stable, based on the strict requirements of the zoning plan, embedded in the context. Both the proportions, as the graded volume and the use of design elements together with an independent architectural language tie in with the traditional elements of a house of the Brabant region. Since the desired space program within the guidelines of the development plan could not be implemented above the ground, a design concept is developed, which based on the modeling of the landscape enables to create attractive spaces in the basement. At the same time the house is designed from the inside to the outside, mediated on the basis of the wishes of the owners, for a home that meets the different needs of a family and communicates a welcoming atmosphere to visitors.

Characteristic of the villa are two, subtly folded, zinc roofs that define together with horizontal, visually floating pergola and the from the garden slightly raised natural stone terrace plate the interior and exterior of the house and anchor it by the horizontal lines in this context. The design of the residential floor as transparent glass pavilion under the folded zinc roofs allows the permanent contact with the surrounding landscape and at the same time the interplay of light and brightness characterizes the atmosphere.

Sliding elements of timber fins enable the transparent pavilion to transform in a more introverted, more intimate living environment. Inside the glass envelope the living areas circulate freely around a central, wood-clad core in which the serving functions such as wardrobe, toilet and the stairs are located. On top of this freestanding core on a gallery under the folded roof provides a more introvert place a retreat, still standing in the visual relation with the living area. At the same time one reaches via the central core the north oriented bedrooms in basement. These rooms, submerged in subdued daylight, are orientated  to the lower garden level and invite you to linger. Both levels, ground floor and basement are determined by  the visual relation with garden and stable, as well as the characteristic, ancient oaks that separate the garden from the paddock.

By a very clear, unambiguous language of form and the reduced materialization the stable is integrated in the ensemble. Both the graying wood for façade and roof of the stable, as well as the extremely precise choice of materials and colors for the house anchor the ensemble on a naturally way in the rural context. The very careful detailing of the building, which is continued in the interior and furniture design of the villa, defines the overall picture.