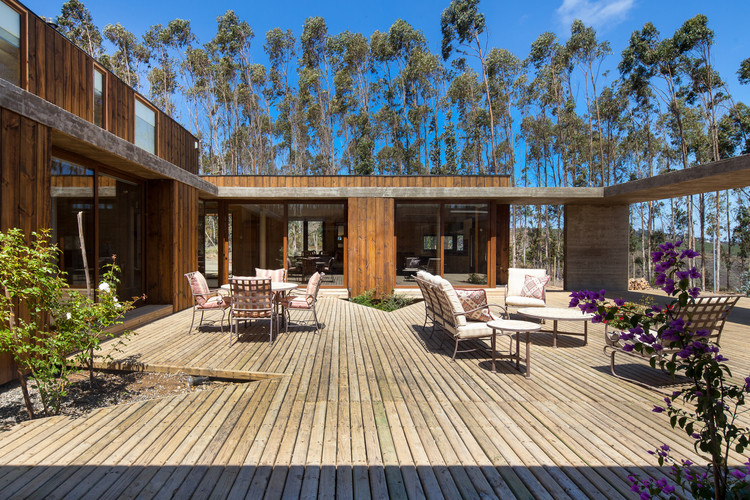 Text description provided by the architects. The requirement is about a house for a mature couple, with no kids, which once retired decides to leave the city and settle in this place near to the sea. The site, located between the road and a forest path, has a soft slope to the west and a distant view to the ocean from a higher ground, above the nearby houses. Such a view appears as the main virtue of the place along with the inmediate presence of a young eucalyptus forest with some native species.

The project includes a double house program, both conected through a common service area, and it is formed by two bodies coming from east to west, and a bigger one between them which contains the entrance, living room and a studio, everything within a double height place that also proposes a visual limit that shows a glimpse of the near landscape.

The main house goes along a inner corridor divided in three consecutive parts, built in rough concrete, that shows the program from private to common places, and whose exterior forms a hundred squared meters terrace that becomes the house's core, defining  a new system of exterior circulations among its differente spaces. The fourth side of that terrace, also in concrete, regulates its relation with the landscape and the sea, framing that faraway view and leaving the nearby houses out of it. It also protects the terrace from the winds coming up from the beach and adds it to the front facade, since the access to the site is from the west.

Though the house is organized around an open space, the squared terrace allows it to keep its privacy so it doesn't run away into the lanscape. This central space its configured by an element, the corridor, that not only contains and determinates where eyes and feet may go, but also works as the structural spine of the building.