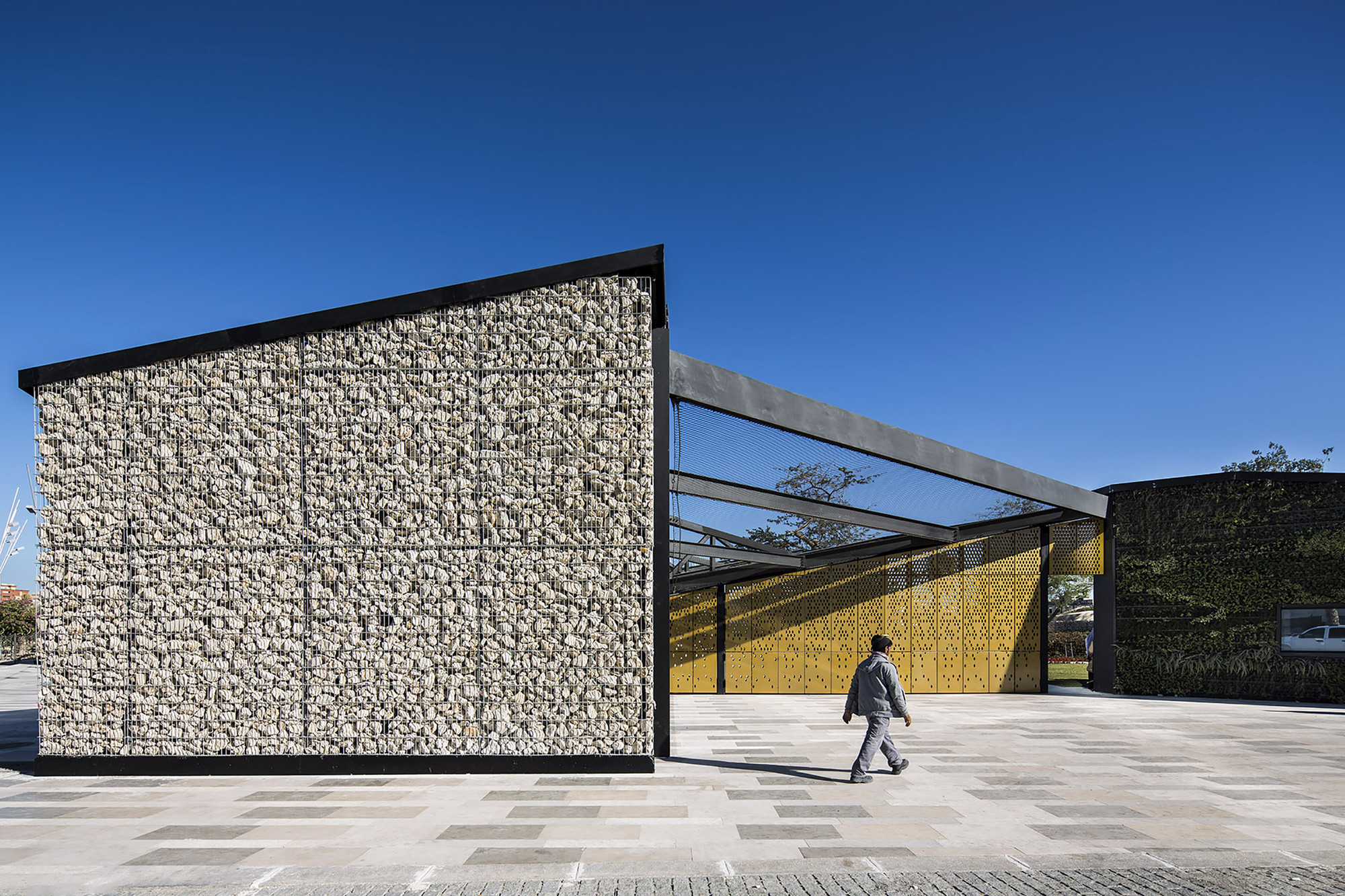 Text description provided by the architects. After the concerns raised by the Martyrs’ Bureau regarding the integrity of the park during the last years, the Emir Office (Kuwait Amiri Diwan) reclaimed, in 2012, the use of the Al Shaheed Park for national celebrations and festivals under the memory of war martyrs. The monument to celebrate the “golden jubilee of Kuwait Constitution” was the first action towards the reconversion, followed by a broad program of public buildings, including two Museums, Car Park, Visitor Centre, a lake and an Aviary for the old Park. The re-design process was determined and strongly affected by the precedent strategic value of this unfinished project, mainly through the instrumental understanding of Peter and Alison Smithson’s proposal for the same area years before (1969-75).

The landscape proposal uses an existing grid, made of underground services and existing trees, that will distribute all the programmatic outdoor and indoor events – the buildings – that will be then converted into mounds due to a consideration of the acoustic studies – the noise protection - and the visual impact of the surrounding. At a larger degree this grid will be a medium climate mitigating wind, noise, dust and sun orientation. It generates a referential that is able to recognize the existing Park limits and trees, underground services, the Constitution Monument and Mecca orientation, as well as providing connections between all proposed elements through three pathways – the Emir path, visitors path and jogging track.

The volume of soil, its transport and storage, innate to the artificial lake and underground car park (program requirements), identified the opportunities to transcend the norm and provide the architectural resources to design the buildings’ fundamental elements. The permission of the Municipal Council was clear regarding the built program, reclaiming the argument that no single building could be erected from the Green Belt grounds, therefore, all proposed buildings are submerged under planted soil.  The possibility of introducing extensive green roofs for larger areas in Kuwait will become a challenge similar to the use of concrete and steel structure for the construction of the Shuwaik Power Station and Desalinization Plant in 1953, first modern structures built in Kuwait.

The Habitat Museum, 'Mathaf AlMawten' in arabic, is a long sand dune planted with native plants that moves into proximity with the garden paths and covers the exhibition galleries, library, laboratory, offices, cafeteria, bookshop and a children learning centre. From the underground car park green roof, the soil drops under the ground to access the museum’s lower level, buried with single structure vacant frames towards the saline depression and desert canyon.

The old Al Shaheed Park’s dominant elements, the fountain and amphitheater, were replaced by the twelve thousand cubic meter lake. The water capacity of the lake will determine a limit to the vegetation and plantation capacity of this reconversion responding to the Amiri Diwan’s request for irrigation water autonomy. The landscape architect was from the early moments interested in understating continuity and unity along with the native landscape of the country. The soil movement was there instrumental to recreate along the park a section of Kuwait’s landscape, from the desert plateau and springs in the north to the oasis of the south, including saline depressions and Acacia woodlands. Flanking the new lake, both the Visitors Centre and the Administration Building, are tentative translations of the courtyard building type.

In the Visitors Centre, the ground is lowered -80cm under the garden level, and opened in two directions allowing the cross ventilation of air and its cooling movement through the building when connected to the internal patio. The programmatic instability of this building during the design stage generated a series of additions around the core, almost as an old town villa with its later additions. The mass resulting out of this process will define the constitution of the mound in its topography and volume - the soil is covering all annexes.

On the opposite end of the garden, towards the old Sha’ab Gate, the museum of war martyrs reclaims the “architectural language of protection: at the ground level of providing an ‘oasis’ of shade in the city” ingrained in Kuwait building culture since Peter and Alison brought it in the discipline contemporary agenda with the 1970 “demonstration mat-building” for the Kuwait Ministries Offices. The new museum is defined by a free roof on top of pilotis “plan drawn through the regularity of the trunks in a grove of date palms” that contain the different programmatic dimensions of the building divided in pavilions, from the exhibition gallery to the cafeteria, offices and research centre. Under the slab the pilotis expand outside the building as the trunks of a new palms grove that will lead you to the city’s old wall gate through an under-passage built during ‘those years of war’35.

The limit of the palms grove is defined by a system of retaining “rampart gardens” cladded, not in Persian- type tiles, but with Portuguese three dimensional tiles that move sufficiently often into proximity with the geometry of the site limits allowing a number of pedestrian paths. These retaining elements when defining the internal faces of the building contain toilets, prayer rooms and other service facilities that are shared between the use of the museum and the surrounding garden. “The ‘faces’ to” these ‘gallerias’ that define also the building circulation “have glass walls which are self shaded and cooled by transverse air movement”.

At the lowest and coolest point of the garden the visitor will be guided through the underpass towards an amphitheater, the old city gate “maidan”, where the walls are still rampart gardens with tiles, and the chairs are portable for occasional encounters or major performances. The audience sits between the lower stage, protected from the sun and surrounding roads’ noise, and the higher platform where the old gate stands in front of Sour Street. At the lower level the next tunnel towards the south indicates the possibility to connect with a further extension of the Amiri Diwan reconversion plans, a the sort of “Sports Maidan”, a multipurpose field that can function as a teaser to engage the young population in sports and entrepreneurship.

The Al Shaheed Park reconversion scheme shares with the 1969 proposal the statement delivered by A+P Smithson in the Venice 1982 Biennale: “the post 1951 city is devoid of historic place; a system of elevated walkways offered ‘a place to go’ in Kuwait: (...) these would be definite places to visit”, but it does not confine on a single assumption, limited scope or tactical intervention. Instead, the multiplicity of public building programs and its relation with the city’s multiple dimensions have the potential to affect a larger strategic conception of the project as a whole.

Each of the building programs inserted in this Park reconversion must be read as a carefully staged plan of action with precise formal and social objectives. These are components of a comprehensive project of the Amiri Diwan to instigate the participation of national citizens in the city’s public space beyond the private owned shopping malls ‘gallerias’. Today, this larger conception informs the Emir Office’s practice and social policies. 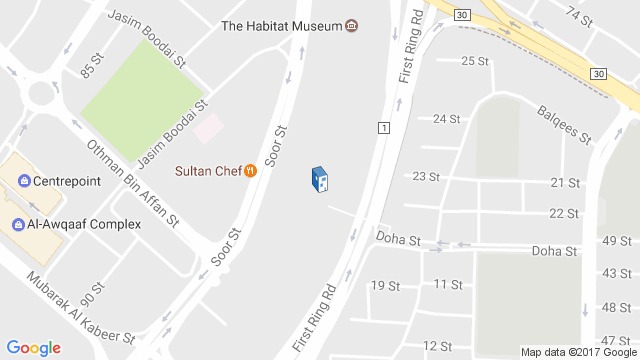 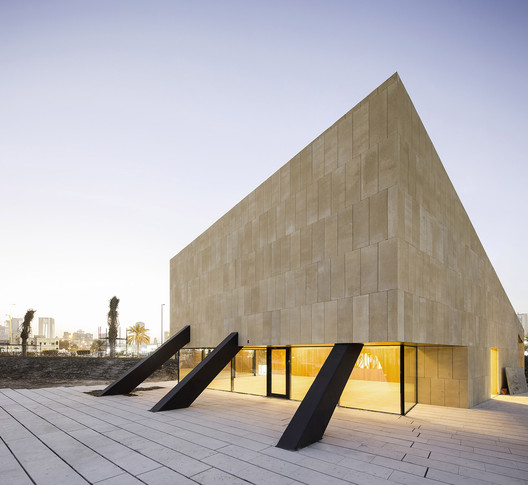