Save
Havana Revisited: Postcards of the Cuban Capital Through the Years
Share
Or
Copy

Thanks to its privileged position as a gateway to North America and Cuba's unique political history, the architecture of the City of Havana has a rich and layered quality rarely found. In a new book edited by Cathryn Griffith, "Havana Revisited: An Architectural Heritage," this history is explored in detail through 12 essays by renowned architects, historians, scholars, preservationists, and urban planners in both Cuba and the United States and a selection of 350 color images comparing historic postcards with the city of today. The following text is the book's introduction, written by Cuban architect, urban planner and critic Mario Coyula (1935-2014).

Havana’s modest beginnings came in the sixteenth century, as the springboard for Spain’s conquest of America. When the port became the obligatory last American stop for Spanish ships making their return voyages to Europe, its significance grew until Havana had become the most important city in the Gulf of Mexico and the Caribbean. From the beginning, it was a settlement oriented toward providing services, especially that of protection. Hence, Havana became home to the most formidable system of defensive fortifications in the colonial Americas.

Havana’s urban design and architecture were more European than Caribbean in character. The mother country’s influence remained stronger there than in any of the Spanish possessions on the continent, which won their independence eighty years earlier than Cuba. In addition, heavy Spanish immigration continued into the first quarter of the twentieth century, even more so than before independence (1898). These factors, together with the rapid disappearance of the native population and the proximity of the United States, made Havana more Spanish and also more North American.

The city grew by expansion, with little demolition or replacement in its older sections, and thus it accumulated valuable layers of distinct architectural periods and styles. These layers range from a lone example of Renaissance military architecture, La Castilla de la Real Fuerza (La Fuerza castle), constructed 1558–1577, the oldest fort built out of lasting materials by Europeans in America (Chapter 2) to the seventeenth-century pre-Baroque with Mudéjar influence from southern Spain, the austere Cuban Baroque of the eighteenth and early nineteenth centuries, some examples of the Neo-Gothic in the mid nineteenth century, and the ubiquitous neoclassical style favored by the Cuban-born sugar aristocracy from the first third of the nineteenth century on. Toward the end of the eighteenth century, Havana had begun to acquire an image of elegance, supported by Cuba’s burgeoning slave-based plantation economy. The capital expanded beyond its walls, gradually incorporating other small nearby settlements. Independent of all this extensive and valuable sixteenth-to-nineteenth-century colonial patrimony, however, the bulk of the city’s twentieth-century building stock was created by and for a rising lower middle class. That growth spurt began with a brief period of Art Nouveau—really Catalan modernism—but is represented above all by the ubiquitous eclectic Beaux Arts, coinciding with a post–World War I economic boom period known as the “Years of the Fat Cows,” which gave shape to the central areas of the capital and all the other cities of Cuba.

The original colonial Spanish city—with its layout of narrow streets, small and compact blocks, deep and narrow lots, and low buildings sharing common walls—expanded in the nineteenth and early twentieth centuries via the development of new areas like El Vedado (Chapter 11), Santos Suárez, La Vibora, Lawton, and the western suburbs, all primarily residential. But those neighborhoods were built with tree-lined streets along which the buildings were detached from each other and separated from the sidewalks by front yards and private porches and porticos. Part of this pattern, too, were the so-called republican parks, tree-shaded plazas filling an entire square block each. In the beginning of the 1930s, the architecture that many would later call Art Deco reached Havana, at first in its geometric version and later the streamlined one. The architecture of the Modern Movement took some time to win acceptance but became dominant after World War II as part of the capital’s second great twentieth-century construction wave. This history explains why most buildings in Havana are less than a hundred years old.

The bulk of the city’s construction is made up of one- or two-story dwellings—the exceptions being some important public buildings, the condominium towers built in the 1950s, and the complexes of five-story walkup public housing built after 1959. The high design quality of 1950s architecture continued into the early years after the revolutionary victory of 1959, now extended throughout the country and to new uses. The average level also improved. Later, excessive centralization and an emphasis on technological and quantitative aspects to the detriment of expressive ones—along with reduced diversity and a nullification of the personality of the designer—brought a loss of expressive quality in post-1960s Cuban architecture. Some special works managed to escape this tendency, but they were few and usually located in the city’s periphery, so they had little impact on the urban image.

Havana’s silhouette, rhythm, texture, character, and scale are very special. The city is low-slung but clearly urban, and its low density confers a special quality of life missing from Latin American cities that have suffered overdevelopment. The program of preservation, restoration, and rehabilitation of La Habana Vieja (Old Havana) and its fortifications, designated a World Heritage Site by UNESCO in 1982, has been notably successful, especially since acquiring independent financing mechanisms in 1993. At the dawning of the twenty-first century, Havana was a city where growth had not erased the imprints of the capital’s many eras, and where inaction had contributed to preservation as well. 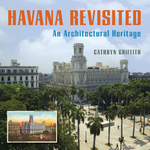 Do you want to win a copy of Havana Revisited: An Architectural Heritage? We're giving away three copies; tell us why you'd like to read the book in the comments below by Saturday 14th March at 12:00pm for a chance to win. (USA entrants only)