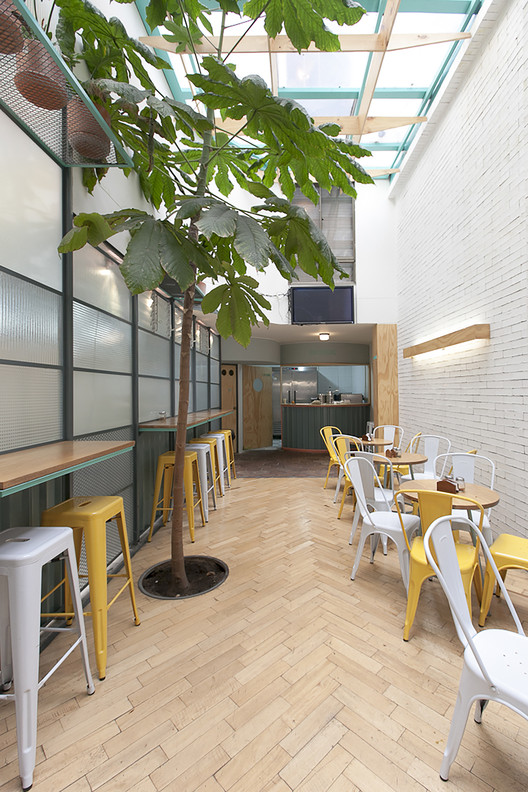 Text description provided by the architects. Conolove is a small restaurant that occupies part of a colonial style house located in an area of architectural conservation in the Water Sector in Bogotá.

In recognizing the existing dwelling and its immediate surroundings, we identified an Urapán tree 20 meters high with a prominent shadow as the main argument of the project, since the mixture between the pressure exerted by its roots on the pavement and the poor soil quality (swelling clay) have resulted in the virtual extinction of this species in the Bogota landscape. Facing its presence upon leaving the premises and observing the movement of its foliage from inside the space are events that we seek to amplify through the recovery of the canopy in the central space and the relocation of the architectural elements that obstruct the axis marking the access.

Only the facade of the house is recognized for architectural conservation, which is why the interior has lost its spatial values to the succession of adjustments, additions and subdivisions which it has undergone over time. As project criteria, we seek to release layers of information and discover the space in its most elemental form through specific demolitions such as the wall between the mezzanine and the void, a particular column in the hall and the division with the rest of the house.

Our operation in the space is framed in the basic principles of circulating and containing. On the one hand we installed a spiral staircase that releases the main lounge and connects to the mezzanine, and a platform that bridges the level differences and allows a continuous passage. On the other hand, we built a double height glass structure that separates the premises from the rest of the house without losing lighting and a series of curved structures that make up the access and kitchen and work space.

In the curvilinear geometry there is a possibility of identifying the elements that correspond to the new project, but on the contrary, the use of color in various planes, traditional materials and translucent coatings seek to connect the spaces and blend time and its remains in a single architecture.

We seek to use materials that promote dialogue between the various styles present in the project through two strategies: continuity and contrast. The parquet wood herringbone, hexagonal stoneware tablets, wood countertops and hammered glass are an interpretation of traditional Bogota style and address an intention of neutrality. On the other hand, in the contained spaces and divisions we have acted in contrast, implementing the use graphic patterns, metallic materials and colors that represent the spirit of the new program.

We used the existing level difference in the salon to plant a Yarumo tree in the heart of the project. This native species of rapid growth and large leaves increases the sense of verticality, gives shade, and next to a line of pots with Philodendros on metal trays, constitutes a soft and unexpected landscape inside. 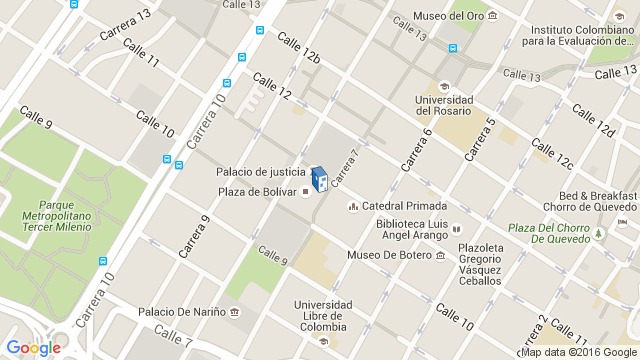 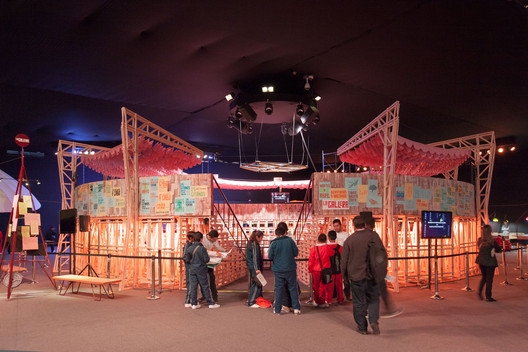