✕
Save
"A Message to Everybody": The Red Square Pavilion Winners on Encouraging Tolerance with Architecture
Share
Or
Copy

Announced in the summer of 2014 the Red Square Tolerance Pavilion, an international ideas competition organized by HMMD, was a deliberately provocative proposal before any teams had even entered - a statement planned in an envronment where tolerance is an increasingly urgent topic, for people both inside and outside Russia. In this interview, originally published by Strelka Magazine, the Italian winners of the competition discuss their proposal and its response to this charged context.

This January the winners of the ‘Red Square Tolerance Pavilion’ competition that was organised by international organisation HMMD were announced. The first prize was given to a team of architects from Italy. Their bold and daring project proposed to build the pavilion right against the Kremlin wall. Strelka Magazine caught up with Kiana Jalali, Marco Merigo, Alessandro Vitale and Matteo Pagani to discuss fluidity of space, the symbolism behind their design and the media image of Russia. 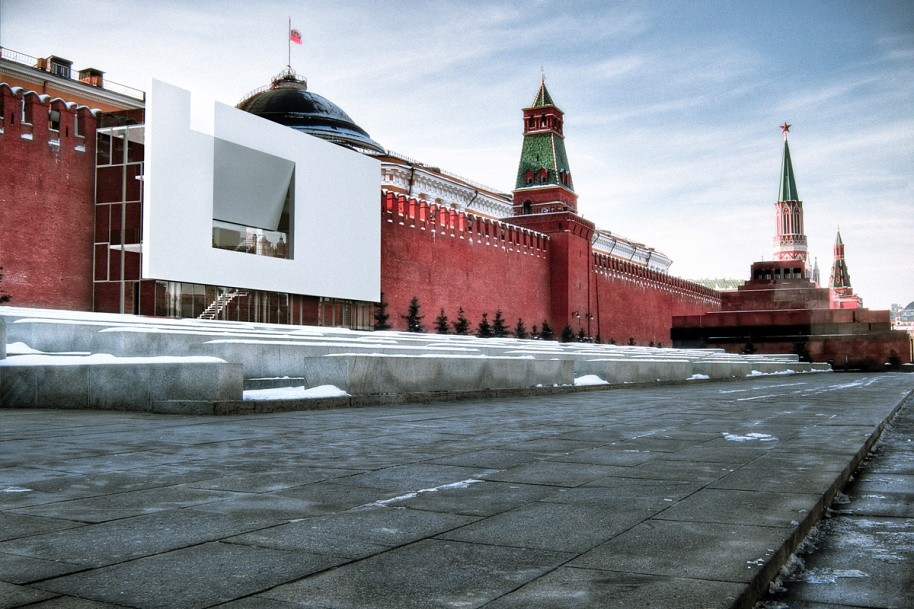 How do you understand ‘tolerance’?

Did you do any research on tolerance in Russia prior to the project?

Kiana Jalali: But although we don’t exactly understand the situation in Russia, some of the problems are very common all around the world. Russia has its own problems, Iran, where I’m from, has its own, Italy has its own — but in a way they are the same everywhere. You just need human sense to understand them.

Who were you keeping in mind as your target audience when working on this project: primarily Russians or an international audience?

Marco Merigo: Definitely, an international audience: it was meant to represent tolerance to everybody, not just to the Russians. It was a message to everybody.

Kiana Jalali: Russia, in this case, was an example for us, an example of a country that was really suffering from lack of tolerance. But the project itself — it could be anywhere where this message is relevant.

Why do you think Red Square was chosen as the location for this project? It doesn’t seem like the most obvious choice.

Marco Merigo: I think that they chose Red Square, because it’s the first image that springs to mind when you think of Moscow, it’s recognised by people all around the world. And also, I guess, because the jury saw it as a symbol of repression.

Kiana Jalali: Actually that was the reason why we decided to locate our pavilion on the border of the square. The competition proposed the site in the middle, but we decided to make one step back and reflect a bit on the meaning of tolerance. Do we have to block the way in the middle or maybe we could move to the side of the square and still retain the presence? That’s why we picked the Kremlin wall. This choice of location allowed us to establish links with all points of the site. And even though it’s a temporary pavilion, we wanted to leave our footprint on the square. We didn’t want it to be something that you add and then you just remove it and it’s gone. It will leave its mark mark on the wall. And we also made sure that a relationship with other elements of the square was established: for example in our renders you can notice references to St. Basil’s cathedral in the interiors.

Can you describe the spatial concept behind the design?

Marco Merigo: The space of the pavilion is very fluid. It’s not divided into rooms — it’s one room on multiple levels which has this unique ambience with the double and triple lights. There are no walls inside the building, the only walls are the Kremlin wall and the new white wall.

Alessandro Vitale: The subspaces are linked together visually, because in the theme of tolerance this kind of relation is important: not just the relationship between inside and outside, but also the spatial links within the building. Hence, the fluidity. It’s really important to have just two walls: if you eliminate one of them — there’s no inner space, it doesn’t exist anymore. So the red Kremlin wall represents the past and the new white wall represents the future, and the space between them reflects the confrontational nature of this relationship.

Kiana Jalali: And also the way that we worked with the façade: it is elevated, it’s not in contact with the ground floor. So it’s open to all the people on the square — anyone can go inside. The composition of the façade also sends an important message: we wanted to have an opening in the middle and then another opening at the top providing the view from the performance area. And there is a link between these two openings: one is sort of ‘cutting’ and the other one is folding, as if accepting.

It’s a very bold and brave project. Did you expect to win?

Matteo Pagani: Yes, we were sure that it is the best project for this competition (laughs). But seriously, we believed in our project. It’s not that we were convinced that we were going to win, but we felt that we understood the theme of the competition and it gave us the confidence.When we were discussing the concept, the first thing that Kiana said was “This is the best project for this place, we’re going to win this competition!”

And do you think that this is the approach we must all adopt when discussing tolerance today: not just acceptance and understanding, but also the ability to be bold and brave?

Kiana Jalali: Definitely: very sharp and direct, but also there is this acceptance, contradictions coexisting. That was our point from the very beginning. And I think we managed to express what we we wanted to say.