The word “treehouse” can conjure up fond childhood memories for many. As a kid, the idea of a house floating above the ground is an endless source of wonder-- and that wonder never truly goes away! Countless designers have experimented with the idea of suspending their architecture among the trees, and a large number of those projects have made their way onto our site. See nine of our favorites, after the break.

Sponsored by the Yellow Pages, this whimsical design from Pacific Environments is a fully-functioning restaurant capable of seating 18 people. With materials and building services sourced directly through the telephone directory, the Yellow Treehouse Restaurant is meant to be “reminiscent of childhood dreams and playtime, fairy stories of enchantment and imagination.” Inspiration for the building’s shape comes from natural forms such as cocoons, onions, and seashells.

This house is built over an artificial pond, nestled among a stand of hemlock trees. Designed by baumraum, this two-story treehouse acts as an observation deck and overnight cabin for a family in the town of Uslar, Germany. Stairs from the pond's edge give access to the structure.

Tree Snake Houses get their name from the construction technique used to build them. The wooden slats of the underside give them the appearance of “a snake gliding between the trees.” The shape was intentionally non-orthogonal, an experiment in how the boundaries of modular construction could be stretched and warped. Designed by Luís Rebelo de Andrade and Tiago Rebelo de Andrade, the houses are raised up on stilts, and accessed via a ramp in the rear of the design.

Another project from baumraum, this house is perched along the lip of a cliff. The design is meant to be an extension of an existing residence. The treehouse is accessed by a slender catwalk suspended by an adjacent oak tree. The house itself is supported by two stilts, and provides stunning views of the surrounding countryside.

Visitors to this Tham & Videgård Arkitekter-designed project may have a hard time finding it. The structure is completely covered in mirrored glass, creating an effective camouflage that is betrayed only by the rope bridge leading up to the house’s entrance. The structure is lightweight aluminum, allowing it to be easily suspended around a single tree. Inside, the plywood hotel room has enough space for two people, and strategically placed windows for a 360 degree view of the sub-polar landscape.

Created by design firm Mithun, this treehouse is an educational facility, teaching visitors about sustainable building design. The structure of the building is a Corten steel frame, an interesting contrast to the wooded surroundings of the Summit Bechtel Reserve.

This treehouse is the only one on the list designed specifically for children! Created by Robert Pokotar and Janez Brežnik, the project is a free-standing structure constructed out of spruce plywood. A colorless nano-varnish and cardboard roofing protect the interior from the elements. Inside, operable openings and easy-to-assemble furniture give children a sense of mastery over their environment. A large plexiglass window at the house’s end gives views to the outside.

Yet another design from baumraum, this project was prompted by Sappi, the Flemish Forest and Nature agency, in an effort to promote more sustainable lifestyles. The design is split between two levels, which holds conference rooms, a lounge, a kitchen, and other space for public events. The building is held up by 19 stilts that are held in place by ecologically friendly foundation screws. The tree house is CO2 neutral, and makes conscientious efforts to reduce energy use through its design.

Recognizable for its butterfly roof, the Banyan Treehouse by RPA is meant to be an artist’s studio. Supported by a concrete footing and stilts, the elevated house is organized around the trunk of the site’s primary tree. The design is constructed and finished entirely in wood, giving it a warm, welcoming aesthetic. 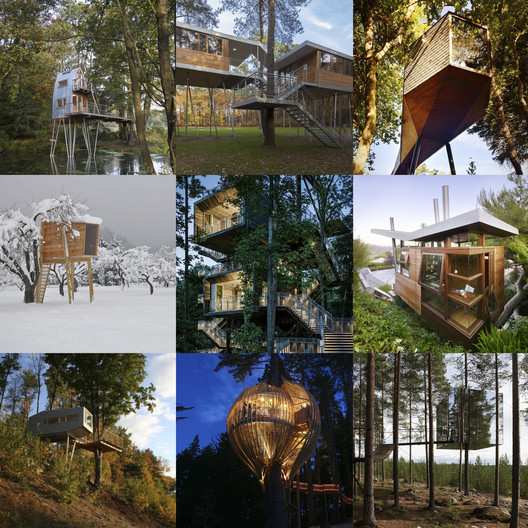