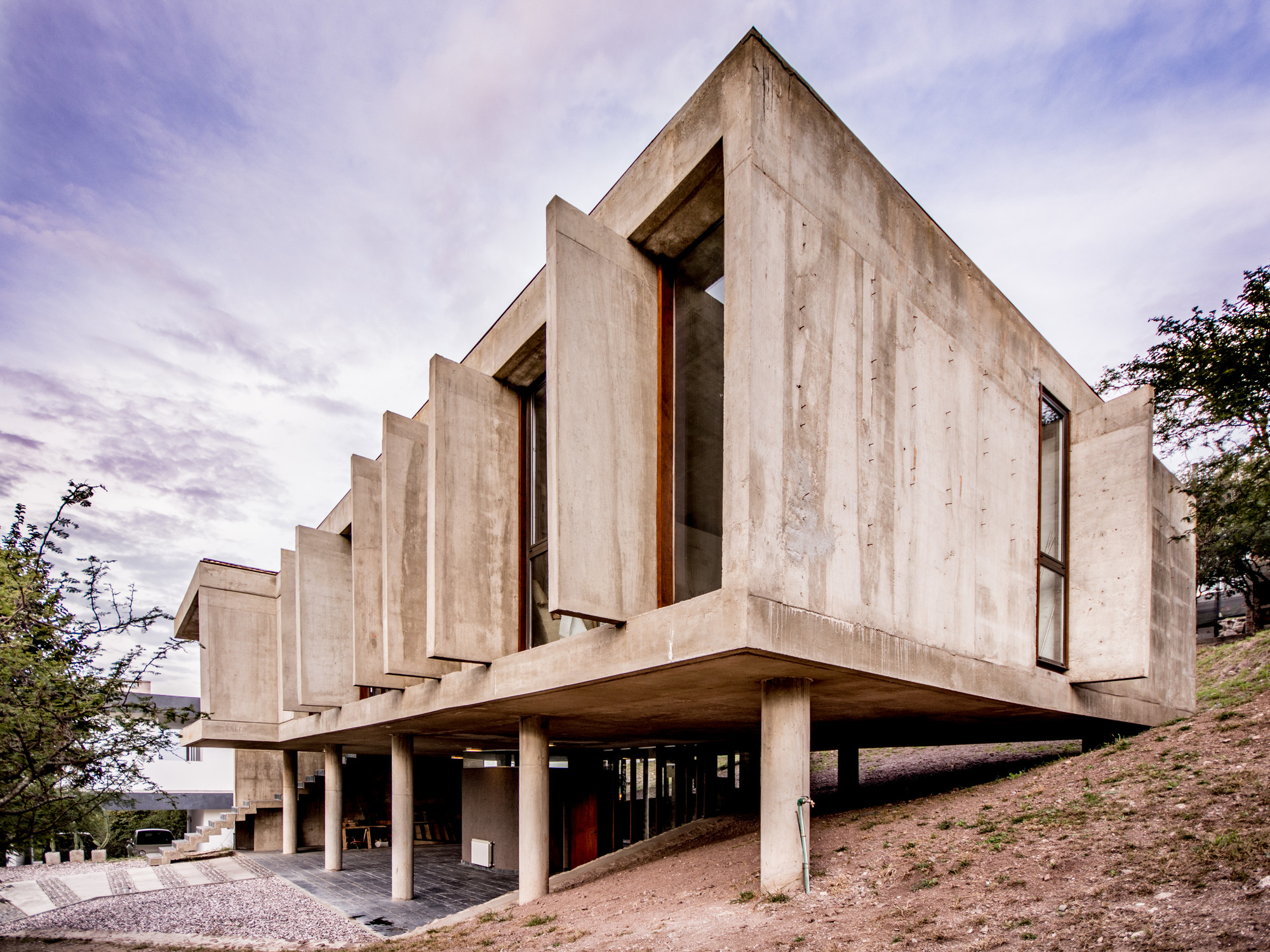 Text description provided by the architects. The project is developed in an 1100 m2 plot, located at the locality of La Calera. It is inserted on a hill that looks to a proper valley of the neighborhood, with a northwest orientation and a grade of 15 meters between the front and back.

The neighborhood is characterised by its steep slope. That’s why the first idea was to look for a strategy that allowed a flat space to place the house. This involved an apparently intelligent operation, which consisted in digging out the mountain at the back of the lot, and with that replenishing the front, acquiring the valued flat plane to hold up the architecture. This solution, used in most of the cases, generated on one hand, an important damage to the natural topography because of the excavation, and in the other hand, backyards that looked to a “bitten” mountain.

In discordance with the damage that caused this intervention, we appeal to Le Corbusier’s idea of lifting the whole volume across the topography, letting the mountain run beneath, obtaining the flat necessary space, artificially, through the performance of two slabs, “roof and floor”, both supported by concrete columns.

The topography movements of the context, generates a variety of perspectives because of the strong articulation of it. An interesting example of this is when we see the house from the street front, where the slope that goes under the floor of the house begins to flatten as the perspective effects and it is seen as green vertical envelopes through the transparencies.

This option generated a more integrated and respectful relation with the mountain, establishing a true dialogue between the location and the architectural volume. This is really important, because “the building’s insertion in the terrain” is one of the biggest concerns of the office.

The architectural volume is a suspended rectangle, that lets the area beneath be diligent as a garage, laundry and semi-covered space. The entrance was resolved on the left side, upon the noble plane, throughout a stair with a little semi-covered entrance hall, from where you accede to the dining room. The rooms were organized towards the front, using the best orientations and visuals. The kitchen, bathrooms and dresser were disposed at the back.

All of the facades were proposed in concrete, with gathers that conform parasols. During the summer, when the west is rotated to the front facade, they generate a series of successive shadows that reduce the solar radiation, making workable the big superficies of glass. The rear face of the house, as the kitchen, is coated with sheet glass 5+5 with opaline pvb that continues through the bathrooms as a translucent enclosure.

The interior of  the house is resolved with the idea of contraposition between the extremely rustic concrete and the perfectly white walls of the inside, that rise from a white floor of micro cement, which doesn’t reach the slab separated just enough to generate tension between the two materials, functionally resolved glazed sashes.

As well as the insertion is an important matter to resolve in the projects, after the teachings from the architect Cesar Naselli, the way in which the light enters to the interior of the buildings, sublimating the spaces with special climate and changing according to hours and seasons. This was achieved through a wood coating located on the staircase, on which reflects light staining inside a warm light volume.

The ten columns that conform the structure of the house are disposed conforming a weft of inverted beams, capable of sustaining little solid slabs, making the inferior part of the them look as a pure concrete volume. The beams disposition generated successive gaps that are filled with styrofoam, solving the inferior thermal insulation problem produced because of the “flying” floor in contact with the exterior.