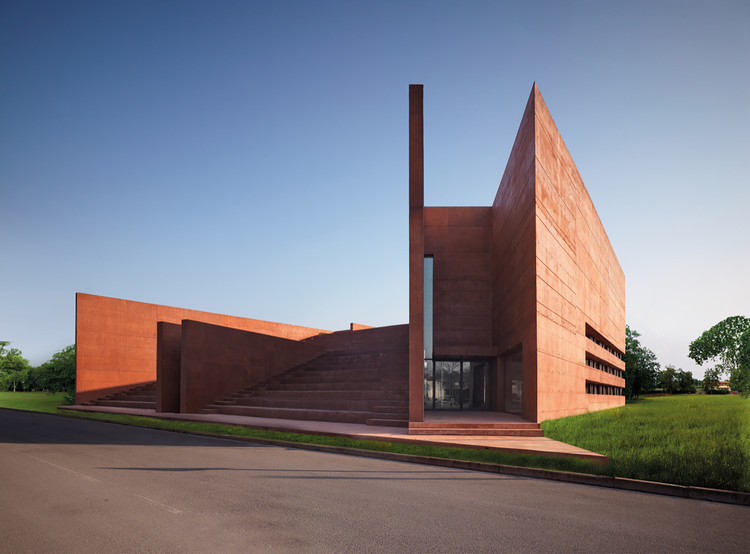 Text description provided by the architects. The project, conceived in 1997, provided for the implementation of the new library and auditorium in Curno, a small town in the province of Bergamo.

The project is located inside a larger area, meant to be a school and community services complex, and posits itself as an element generative of a different dimension of public space, capable of designing a new square, a contemporary theater and its extension and stairs, is a reinterpretation of the traditional cavea: a space for meditation and observation.

The project, which covers about 2,000sqm, is a monolith of concrete pigmented with iron oxides, completely decorated with a bas-relief engraved with the letters of the alphabet. The main image in the perspective, which looks towards the square, recalls that of an open book whose words, engraved in the pages, enrich and give identity to the bare surfaces of the cement.

The structure, divided by a long corridor bounded by a concrete double wall, visually connects the square to the back of the middle school and identifies two distinct parts that contain within them the main functions: the Auditorium and the Library.

The presence in a single building of two distinct functions is obliged to maintain compliance with fire prevention regulations, a clear separation between the two activities, providing them with a zone-filter. The central corridor constitutes the true backbone of the project with structural as well as plant features, while the two concrete 40cm walls make up the carrying structure for the Auditorium cover, for that of the reading room, as well as accommodation for the air-conditioning system, and the distribution of electricity and fire prevention system.

During construction of the concrete walls a series of 200mm diameter PVC pipes were inserted into the walls, at regular intervals, ensuring a perfect distribution of air inside the rooms. In the basement floor, under the central corridor, there is a long and spacious warehouse for books with shelves made through the assembly of commercial metal sections.

This floor houses all of the technical areas for the boilers, airconditioning system, and refrigeration unit. Access to the new structure starts through a path covered by a jutted-out cantilevered roof, in pigmented concrete, that connects with the nearby middle school. The entry foyer also features an area for an eventual ticket window or waiting room, allowing direct connection with both the auditorium and the library through the corridor-periodicals room.

The auditorium is developed in the space under the stairway and includes a room on two levels and that can accommodate about 200 people, completely covered with panels of industrial cherry wood to ensure the room optimal acoustics. In the lower part behind the stage are dressing rooms and two spaces for warehouse use.

From the corridor-periodicals room – on two levels, fully illuminated from above by a long skylight and a large shelving made of metal sections, which allows both the placement and the use of about 50% of volumes – we can access the main reading room: a doubleheight space illuminated by a few banded windows that cut for the entire length of the reading room facade surface, and by two skylights.

These lights give light to the reading room and to the mezzanine above: a reading space connected to a metal guard rail network structure, lengthened by a long wooden landing. The reading room, even though configured as a single volume, is divided into two areas by the main desk; a smaller one for children, and a larger one for teens and adults.

In the design of the library it was determined that the entire building would be realized with a unique material that confers to an architectural object a unified look, thereby optimizing the articulation of the volumes. Through various laboratory tests and various samples, they opted for a colored concrete with a “mix-design” integrated with natural iron oxide pigments and with the addition of lubricants to make the concrete workable according to particular conformations of the molds.

This “mix-design” has enabled the realization of a concrete with high resistance and durability that have been enriched by a surface treatment comprised of a slurry of pigmented cement with iron oxides, and finished with a varnish of protective silicone. The realization of the letters on the surface of the walls was made possible by the positioning of plastic matrices onto those surfaces.

With regard to the thermal resistance characteristics it has been provided Curno Municipal Library and Auditorium to incorporate within the walls, as well as the air passage channels, some polystyrene panels of different thickness to create an effective thermal caulking between the exterior and interior of the building.

Note: this article was originally published on 2 February, 2015 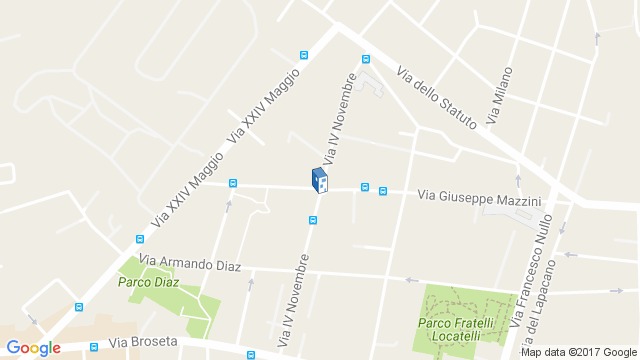 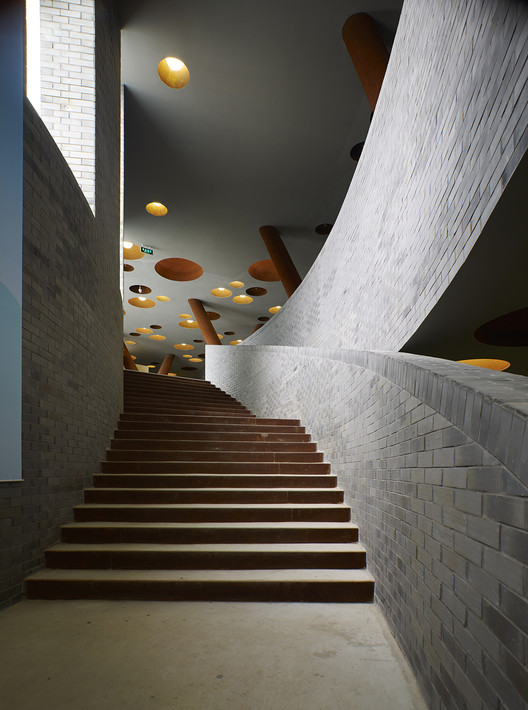 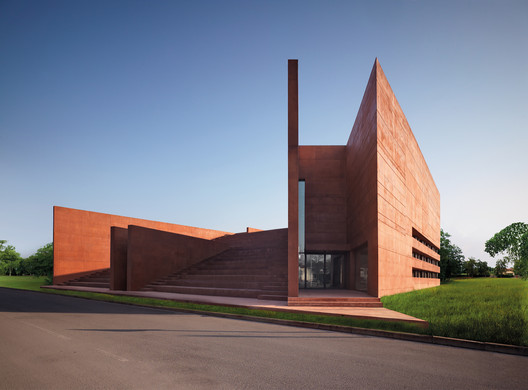