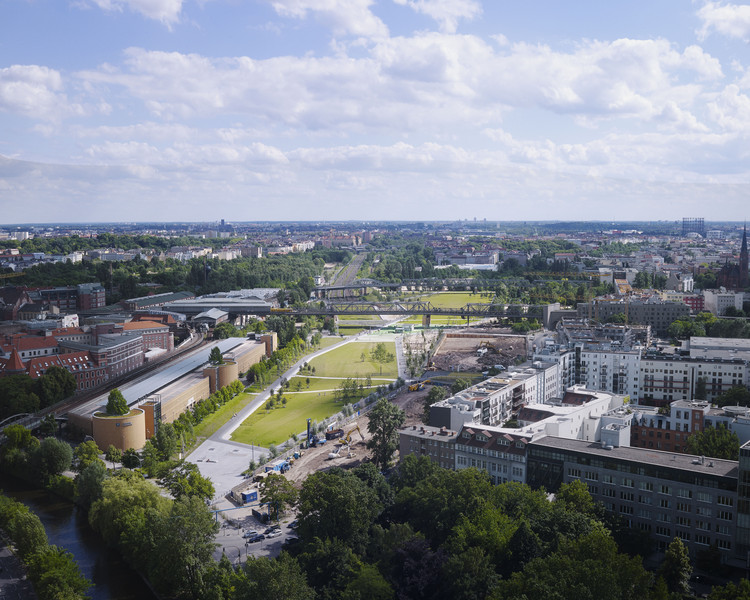 Text description provided by the architects. In the heart of Kreuzberg, Berlin’s new, big inner-city park is opening this summer: The “Park am Gleisdreieck”, a former triangular junction. The first half of an altogether 36 hectares area spanning in the Western part of Berlin was already opened in September 2011 („Gleisdreieck - Eastpark“).

Named after the turn-of-the-20th-century viaducts of the overhead railway, which form a triangle here, since 1945 the Gleisdreieck has been waste land. Before, the area of the Anhalter and Potsdamer railway yards had been an enclave of the German state railway “Reichsbahn” for decades. Now, for the first time, this tract of land has been reintegrated into urban structure.

The town building basic agreement provides, besides the realisation of the park, for the development of about 16 hectares of urban quarters to round off the park on diverse areas. For the purpose of a sustainable town planning with direct access to the Park am Gleisdreieck new urban quarters with qualitatively valuable housing spaces, cross-generational and eco-friendly living areas with a zero carbon environmental impact together with integrated workshops will be developed.

With the Park am Gleisdreieck a modern urban location has been created focusing on the basic essentials of landscape architecture. Without any decoration, a location is formed,  which keeps it as simple as possible but uses fine details, sensual materials and vegetation, which together unfold a strong, poetical effect.

The contrast between „grown“ nature and artificially built elements, vegetative elements has been purposely put in scene. Poetical landscapes unify to one big beautiful scenery. As a „green break“ in the city, the Park am Gleisdreieck stands at the same time for contemplative and stimulative experience of free space, targeting at a refined, sensual perception of the city.

The impressive expanse and the other-worldliness of the plateau-like grounds, which lie four meters above city level as well as the relicts of the former railway junction, make the park unique in Berlin. By means of an exceptionally large-scale and clear configuration many poetical types of scenery are created, together forming one big landscape: the freedom of the meadows, the backdrops of trees, the forest, the nursery, the large terraces, the small woods, the sport tracks, and the central plaza.

Robust and long-living materials are essential criteria for a successful landscape architectonic concept and the later use of a park. With four 80 meters long bench sculptures on the terraces and the luminaires, crossing the park as differently folded masts, an own large sculpture is formed, which characterizes the entire site.

Summing up our concept, we have put more focus on the future development and the new image of the site than on railway history or the nature myth created by the very special absence of man which will change in any case due to his future presence. The history of the area is the starting point for a new voyage and not to be considered conservational. The new park will put something into motion in this location, change the site itself, let something old appear new and will above all be a place where neighbours and visitors will like to spend their time. As a change from the surrounding city, people will experience here relaxation and leisure.

Ideally, the Park am Gleisdreieck can show how Berlin really is: multi-cultural, sophisticated without showing off, modern, flexible, fun-loving, and above all sensual. Finally, we hope that the park will build a bridge between the old quarters and the new life at the Potsdamer Platz.

Since the Park am Gleisdreieck was opened only recently (the 2nd September of 2011), as landscape architects and citizens of Berlin, we strongly believe that our vision of a decent, contemporary urban park will be adopted positively by Berlin‘s inhabitants. 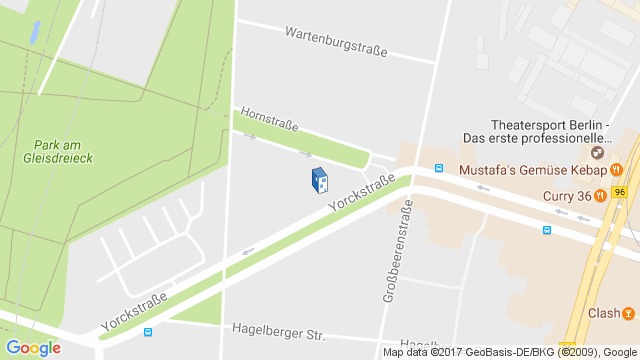 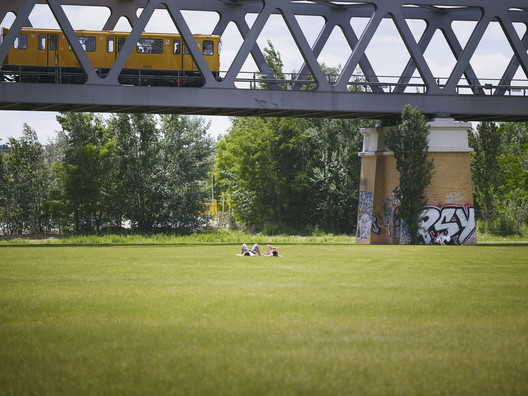