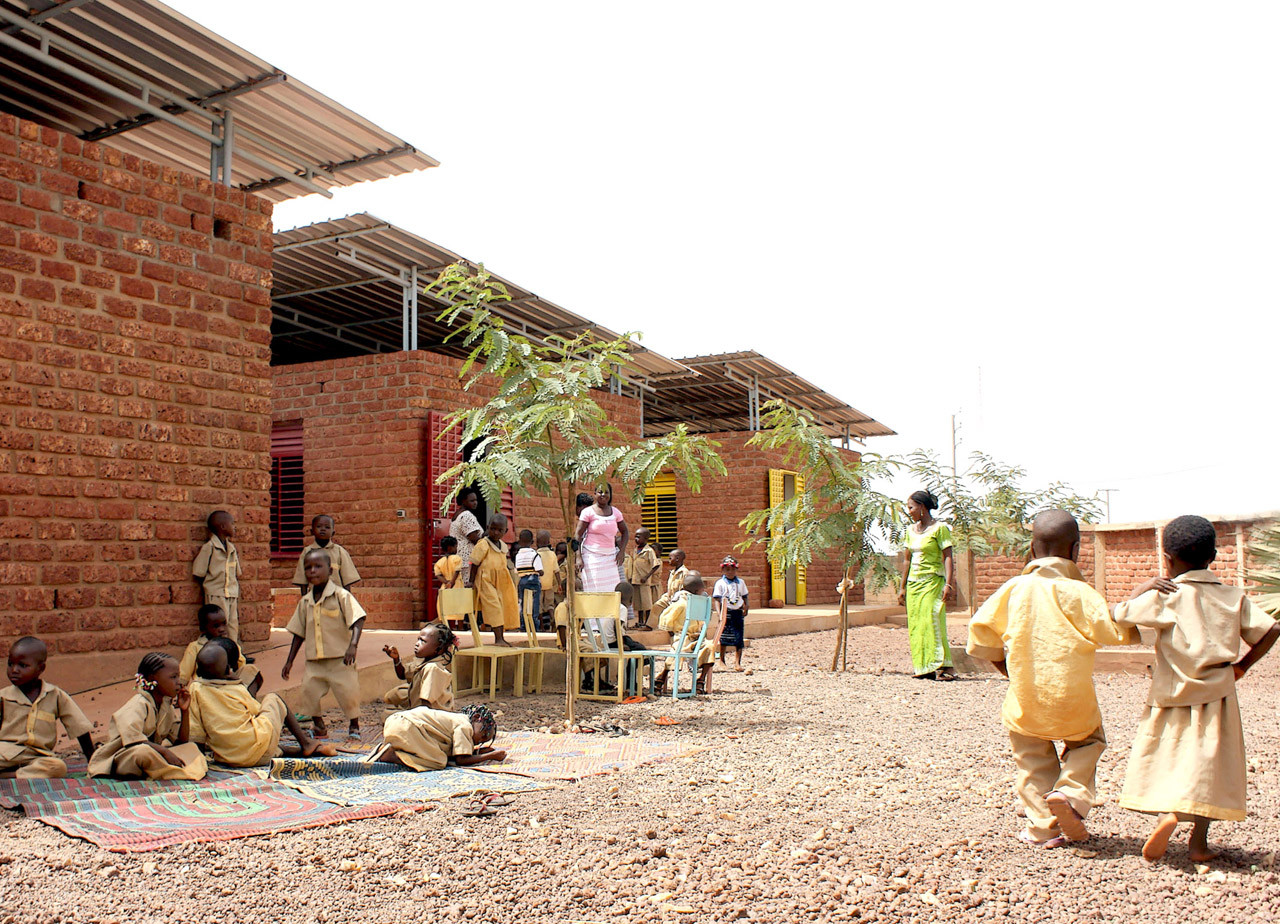 The nursery school is one of the buildings that make up the cultural center LE VILLAGE LAAFI of Koudougou, the third city of Burkina Faso. This facility arises with the idea of bringing together in one place most activities that Laafi association (Burkina, France, Spain) carries out since 2001. This center promotes education, training, artistic production and cultural exchange.

The school follows the basic criteria developed in the realization of VILLAGE since early 2009, both in the design and the construction. At the spatial level, the layout of the different volumes corresponds to the intention of creating courtyards that relate buildings proportionally to the program, in resemblance to the formalization of the traditional houses of the villages in the region. As for the construction, we propose the maximum use of local materials with participation of the beneficiary population.

To the north of the project is the administration building consisting of a volume closed at each end where the offices, meeting room and warehouse are located, freeing the intermediate space as a multipurpose porch where activities such as refectory, outdoor classroom or stage for student performances are carried out. It has a direct relationship to the playground courtyard but also has some links with the rest of the Village, especially with the adjacent sports court, as the enclosing wall is built with a lattice. At the foot of this wall is a bench, constructed as small grandstand for the sport area.

The construction of this piece differs from the classroom, like a transition hinge between the first buildings of the cultural center, towards the north, and the classrooms of the school. Therefore we continue the constructive typology of laterite stone walls topped by a band concrete and double metal roof.

The classrooms are arranged on the east-west axis and the rhythm of filled / voids initiated in the conception of the entire cultural center, seeking to expose the least facade possible to the violent storms, and provide the courtyards with the built spaces. Similarly the bodies of classrooms are offset to the east of the site, allowing free sheltered space to the west where a set of acacias are planted that shade the playground all year.

Each classroom has its own courtyard that becomes an extension of the interior space and it is where thematic outdoor activities take place. Areas of different textures are created with sand and gravel, natural shade from fruit trees and protected areas from the rain or strong winds of the harmattan season between November and March.

The three classrooms are related through the entrance corridor, a platform raised about 30cm above ground level, which separates the "private" courtyard area from the common activities area.

The bathroom block is laid out to the west of the school following the north-south axis, perpendicular to the prevailing eastern winds, to exploit the natural flow and ventilate permanently this open body. The roof is prolonged and creates the front porch of the enclosure.

The newly built enclosure walls of the plot are setback and separated from the property line to generate the entrance to the school and the LAAFI Village, leaving an outer lobby that connects the facility to the city.

The school is built with two different systems, one in the Administration Building, heir to the system already experienced in the first buildings of the cultural center, and another in the classrooms which is substantially different. Both arise from the reinterpretation of vernacular building tradition, adapting and trying to improve it with the use of higher performance materials.

The idea is to build a shade to protect the building from strong sunlight and heavy rains of the wet season. Traditionally this shadow is formed by a log structure supporting a significant thickness of straw or earth if the roof is walkable. The typical home is usually made of load bearing walls of adobe raised on stone and mud foundations, a higher ceiling of wooden logs with infill of the same material -branches or smaller trunks- on which a thick compacted layer of soil is laid out on a slope that keeps the interior cool and quickly evacuates rainwater through wood or ceramic gargoyles.

The administration building is constructed by a system from tradition. Brick walls made of exposed stone -less vulnerable than the adobe to degradation by rainwater. Ceilings made of reinforced concrete beams replacing the currently protected tree trunks and wooden paneling made of reused boards from the formwork used for concrete elements, treated with anti termite oils. On the roof, a plastic sheet on a bed of cement bags that once used are filled with soil and tied. A final layer of mortar evacuates through a folded sheet metal channel. The shadow over the building, the parasol-umbrella, is made of a double deck structure of small columns, beams and metal tube straps topped with corrugated galvanized iron.

For the classrooms volumes the system is modified. Now the facade is a double wall ventilated with the exterior layer made of exposed stone bricks, protecting from rainwater as well as external thermal radiation for the adobe blocks that make up the inner load-bearing layer. The roof rests on the walls of earth. The interior walls are coated in the traditional manner with plaster handmade clay and lime finish. Since, building with earth walls is very difficult to ensure that termites will not enter to the roof level, leading to some risk of degradation of the wood paneling. Here we construct a small concrete slab 8 cm thick on the joists. Prior to pouring the concrete, we put different ceramic vessels that allow extracting the hot air that accumulates indoors, as is still done in the traditional buildings Lobi and Gurunsi.

The concrete base, brownstone facades and the top metal roof unifies all the buildings of the project.

In the lower area of the plot that the city of Koudougou donated in 2008 to the LAAFI association, there was a neighborhood where household waste has accumulated for years had. A group of French volunteers supporters of the association and some members of the organization in Koudougou were responsible for cleaning the site in late 2009. In 2010 we proposed the school project and seeked the necessary funding for its implementation. In the summer of 2011 began the construction of the classrooms.

The bulk of the construction was carried out by a team of young masonry apprentices between 18 and 25 years, all neighbors of the LAAFI cultural center, who once the project was completed, won great reputation among their fellow citizens in building stone brickwork. A group of women from a neighboring village also participated in the process, they were responsible for the realization of the interior wall finishes, plastered in adobe clay by hand.

The project arises from the premise of suiting the specific context of the sub-sahelian zone, at the energy, aesthetic and functional level. From the design we have tried to use environmental conditions and local materials positively. We have also sought a good overall energy balance in the constructive process -extraction of materials, assembling, waste treatment, recycling, ... - and in the phase of the life of the building.

The materials have been selected according to two main criteria: proximity and those following bioclimatic building principles and recovery / upgrade of traditional techniques. 100% of the materials of the project are local, they can all be found in the city and the vast majority are made in Burkina Faso, not imported. The quarry from which are drawn tens of thousands of laterite blocks for making bricks for the facade is about 4km from the site and the earth for making adobes is from a little over 500 meters.

We have planned to incorporate as much as possible the construction waste within the school design. The earth from the excavation of foundation trenches is used to form the interior subbase of the lower level and the circulation areas. Empty cement bags are filled with earth or with the lateritic waste generated by carving the stone blocks. The wooden boards necessary for concrete formwork, which is usually discarded after a couple of uses due to its poor quality, is treated and reused in the construction of the roof. Others served as shelves for the classrooms. The eucalyptus tree trunks used to strut the formwork on site are used for the construction of a porch for children. Metal rods in the roof are dimensioned so that the shrinkage is minimal, and if any piece was left over, it has easily been used in the manufacture of trash cans along with an empty bag of cement. Finally, the enclosure cement mortar wall has remained on the east side of the school, rebuilding only the opposite wall because its layout was incorrect. The demolition was made so that the metal door leading to the landfill has been reused, and once stripped and varnished has been placed at the entrance to the school, with concrete pillars once horizontally on the ground used as bleachers for the common activities, and the rubble of fragmented blocks has been made into concrete for a new section of the enclosure wall. 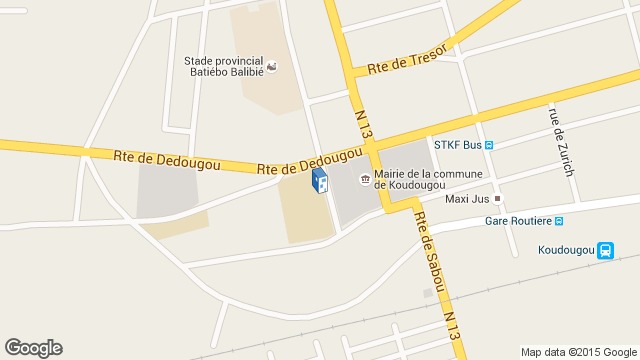