Save
The Jetty to the Mont-Saint-Michel / Dietmar Feichtinger Architectes 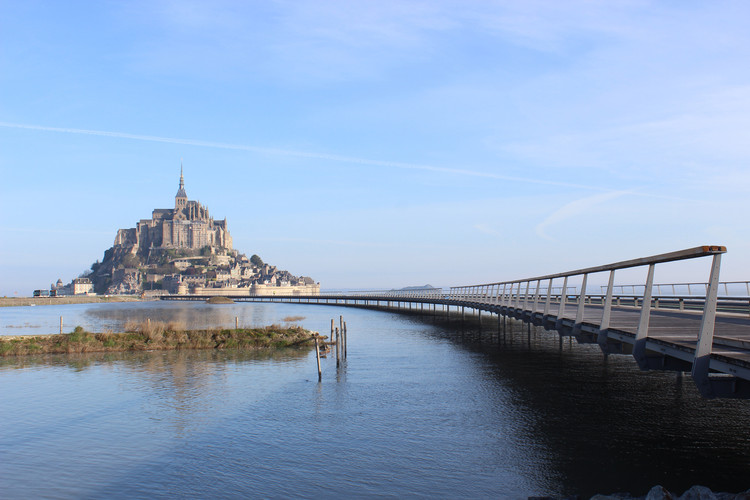 Text description provided by the architects. Creating a new access to one of the most remarkable cultural monuments and landscapes in Europe is a rare challenge for the design of a causeway.

The estuary of the Couesnon River surprises by the immensity of the bay surrounding the Mont Saint-Michel, by the beauty of light and the colours of the natural elements. The changing sea level by tides rising up to 14 m, creates a repeated event exposing the forces of nature and offers a variety of landscapes alternating between land reaching far out into the sea on low tide and the water filled bay with the Mont transformed into an island as only landmark on high tide. This radical change contributes to the magic of the site.

The minimal slope of the estuary and one of the world’s highest differences between tides accentuate the phenomenon: the sea is approaching the coast like galloping horses according to Victor Hugo.

Walking on the Water

From the mainland to the Mont, the general geometry forms a continuous curve. Slightly offset to the East before turning back, it offers a variety of views. The jetty becomes part of the bay following the smooth lines designed by water.

The new causeway and jetty assure a safe walkway for visitors as well as a central roadway for shuttle services.

Bi-directional shuttle busses assure the connection of the new parking on the continent to the Island using the central part with a width of 6m50. It grows constantly up to a width of 8m50 at the terminal which is situated in a distance of 300 meters to the entrance in the defense wall of the Mont.

The central road carries the walkways on cantilevers, large balconies offering fantastic perspectives. The columns are situated under the central part. The shadow of the balcony enforces their discrete appearance.

During high tide sea level is just under the level of the deck giving the impression of walking on water.

The last two hundred meters of the jetty are descending by 1% leading to a concrete platform facing the Mont. The platform is submerged several days a year on high tide and provides total insularity of the Mont Saint-Michel. 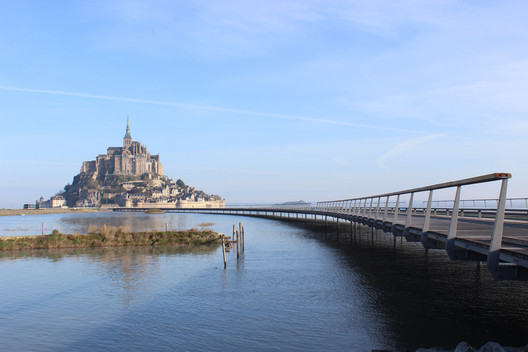