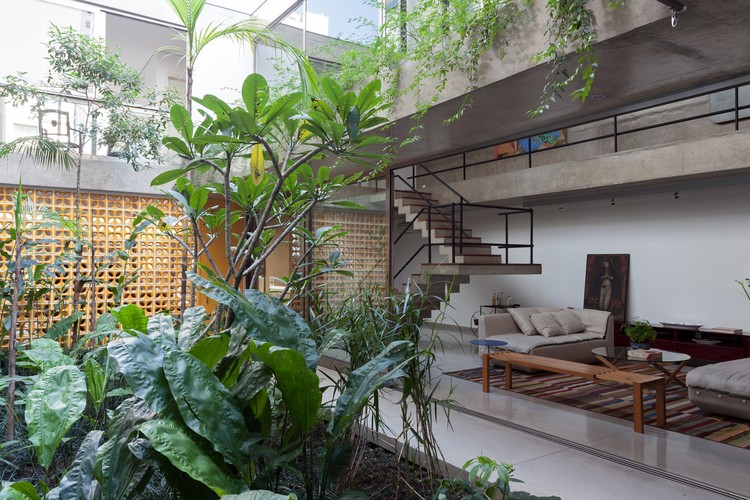 Text description provided by the architects. This residence in São Paulo is a project for a middle-aged couple and a daughter. Neighborhood residents wanted to continue living there, but not in an apartment. The site they found, in a small street, housed an industrial kitchen that occupied 100% of the lot. This building had no architectural value and no concern for sunlight and ventilation. The project arose from the idea of a mini respite in the urban landscape.

The large concrete box of the first floor is the concept of the house. The box has tears, creating voids that illuminate without penetrating the privacy of the residents of the house, which is in the heart of a neighborhood predominantly comprised of buildings. The voids are filled with lush and contemplative gardens, which can be viewed from all environments, creating a visual connection between the ground and the first floor. Another important point in this connection is the double height of the living room, which allows a clear understanding of the house.

The use of inverted beams was the structural solution found so that the slab of the first floor can seen from the ground floor, strengthening the identity of the concrete box. This choice also allowed the pipes of the entire second floor to be laid out between the floor and the slab.

The location of the house on the lot aims to make the most of the sunlight, already quite limited by the surroundings. Downstairs is the social part of the house: on one side is the closed toilet block. On the other side is the kitchen block and service area. Among them, an open living and dining room. The entire floor has granite floors, leaving the feeling of being inside or outside the house. A wall of yellow Cobogó makes a separation from the garage to the garden. Upstairs there are three bedrooms and a TV room, and a balcony with a pergola, the result of these tears on the floating concrete box.

The staircase in the middle of the living room was adopted as a plastic and structural element, serving as a visual protection from those who enter the residence, partially blocking the view of what is happening in the living room.

This is a project with strong modernist references, due to the concrete, the free plan and the voids, but with a more contemporary and current footprint. 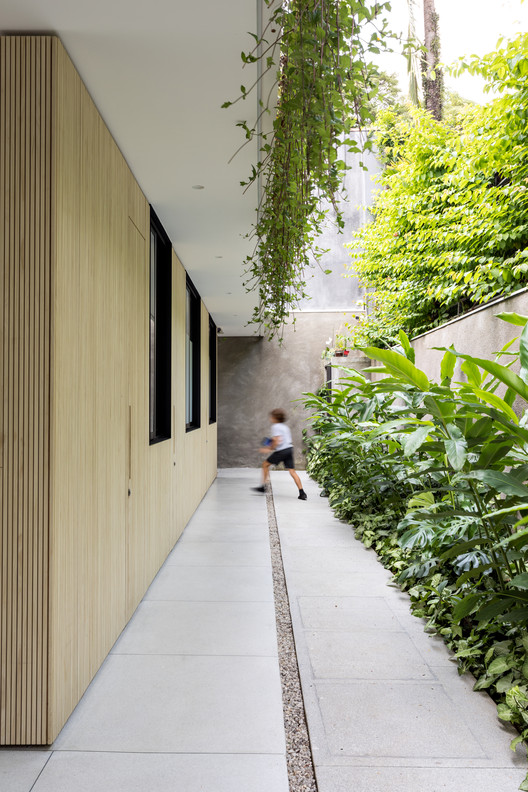