A very important issue in our design process was to benefit the spectacular view and at the same time block the undesirable one. The localization and altitude of the site have ensured scenic overlook towards south and north, but in the east side we had a neighbor with an unpleasant look-out which we prefered to have less openings especially in private spaces which we need more privacy.

Consistency/conformity between the building's envelope and interior spaces has been our design principle. The initial idea reflects the organization of the spaces: the more private rooms are located at the corners of the layout, while the more public spaces are set at the center to benefit from more light and view. The design of the building's envelope follows the same rule. A rectangular module with an opening proliferates on the surface of the envelope in a way that large units with large opening at the center of facade grow smaller towards the edges of the building, offering more privacy.

When the project was referred to us the structure was built, thus the pattern of the envelope has been derived from the super-imposition of two grids: the grid of the existing structure and the grid proposed by the organization of the public and the private spaces.

Traditional forms or ornaments have not been used in the design, Yet the general concept and all details have been originated from the idea of unity in diversity which has root in our traditional architecture. In Iran's traditional architecture, a module (Peyman) were used in different design aspects, in all scales. The same routine has been implemented here in the design process with an attempt to avoid monotony in the repetition of modules and elements.

Raising the quality of common areas was among the most important design principles. Diverse vivacious collective spaces improve the social impacts and connections between the neighbors, these collective and recreational spaces revitalizes the ten-story residential building. Here, green zone has been incorporated on the roof as a “green roof” which accommodates recreational and sportive facilities for the residents. In a densely populated city like Tehran with rapid urban development, along with congestion of building and devastation of intra-city gardens and open spaces, using the unutilized space of roof as a multipurpose space could suggest an appropriate solution to compensate this deficiency. The roof-top pool has been considered for enjoying the sun and the unique urban-scape during the warm seasons while the indoor pool with sauna and Jacuzzi at the basement level facilitates the building all through the year. Moreover, the tennis court on the roof, the gym and multi-purpose salons at basement levels have improved the quality of life of the neighbors and the social impacts of the building.

In choosing the building materials, our first consideration was to avoid using disparate materials and use the natural ones; stone and wood. Because of the rocky and green mountains in the north, the uniformly use of stone in facade in addition to the green roof, connects the skyline of the project with its surrounding and provides unity with its instant environment. The project is also an innovative approach to stone. In Iran stone is mainly considered classic architecture, with this project we tried to change the rules and show how this traditional, natural material can be used in a contemporary way. 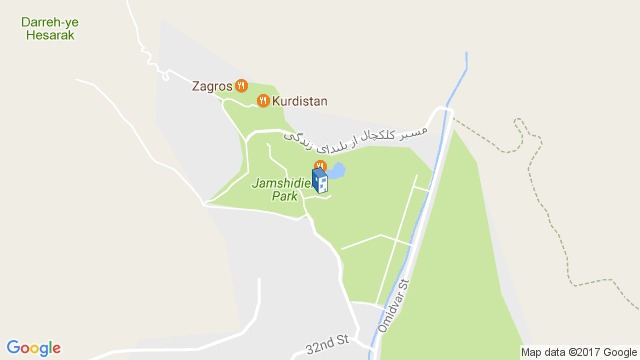