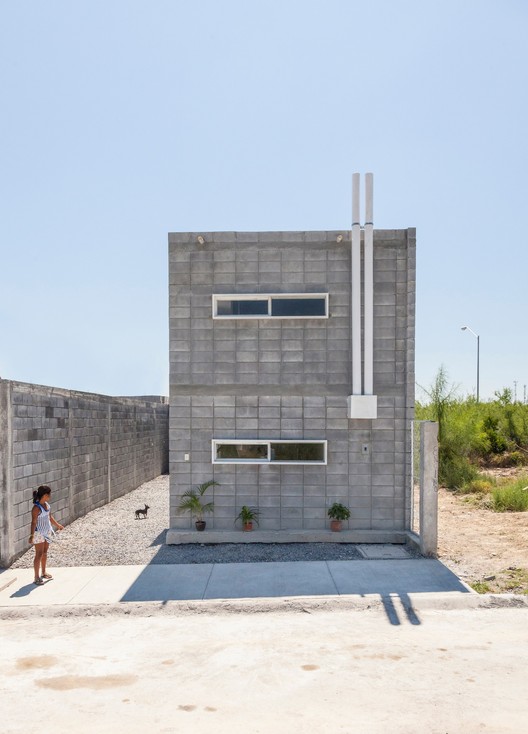 Text description provided by the architects. Box House is a dwelling developed under the methodology of the social project Vivex Community, an initiative of S-AR (a collaborative architecture workshop based in Monterrey, Mexico), whose purpose is to bring architecture and its design processes, planning and social work to poor families, marginalized communities, or to provide basic infrastructure to institutions that provide social support.

This project aims to generate a typology of competitive and feasible housing for a low and medium income market.

This property is proposed in a suburban plot with an area of standard dimensions, in the subdivisions commonly made by the local government (Monterrey Metropolitan Area) and many of the housing developers operating in the city, that is, lots approximately 7 m wide x 15 m long.

As a project of social architecture, the construction method seeks the active participation of future users. The head of the family is a construction worker, generating roots, responsibility and commitment to the project.

The families that Vivex Community is supporting are families whose heads or other members are construction workers, this in order to facilitate the understanding and execution of the project. Also, people engaged in this work regularly make their living building houses for others, paradoxically often have no house of their own, and have to pay rent. Many times their rent has inadequate conditions of space, lighting, ventilation and cleanliness.

This sector is also vulnerable because of the instability of the work, as the construction projects, employers or companies constantly change, and that does not help them generate steady savings or qualify for official housing programs from the government that demand credit from the beneficiaries.

How does the community and participatory methodology work? Vivex Community provides the supply and management of construction materials through sponsorships with companies and individuals, as well as technical assistance with the designers of the house, in this case S-AR.

The beneficiary family, which has its own land, brings labor every week, along with coworkers, friends and family, which significantly reduces the cost of housing and generates the value of teamwork in the family. The construction process itself is a learning process and an assimilation of values. Likewise, when building the house with their own manual resources, the family learns new skills that they can use for other paid jobs in the future.

We meet weekly with everyone involved, from the design process of the dwelling to its construction, as well as site supervision.

The aim of this process is to support poor families, as is the case of Jesús Galván's family (head of a beneficiary family), so that they can have their own house, which will bring a space of intimacy and a place for his family to develop in the future, towards other basic aims like health and education.

Jesús Galván is a construction worker (commonly called masons), 32 years old. His family consists of him and his partner Norma Alicia, his eldest son Jesús Alejandro and small daughters Yareli Guadalupe and Kelli Yojana. For years they have lived renting a separate room upstairs in the house of an acquaintance.

Thanks to his work, a little over two years ago he began to buy land in the community of Zuazua, on the outskirts of the metropolitan area of Monterrey, where he regularly works as a builder. He is still paying for the land, but is slowly getting there.

Cost / Time. The total cost of the house in sponsored materials and workmanship for basic blacksmithing and glass installation (the only items that were not made directly by the beneficiary, as with counseling he could perform the building services and woodwork of the house, which has generated a professional growth for him) was 150,000 Mexican pesos, about 11,600 US dollars. This includes the foundation, structure, walls, slabs, electrical and plumbing, carpentry, blacksmithing, glass, sidewalk, interior plaster slabs, painting and waterproofing of a house with two levels of 110 m2, and even an option for growth.

The construction time for this type of project is longer than a common project because labor depends on the time investment of the beneficiary family, which usually can only spend one or two days a week on the construction of their home, to continue with their normal activities and permanent work. Times are also influenced by the flow of donations of materials or resources received.

Project. The house is defined as a box containing in turn other boxes. The first box is placed in the middle of the site, leaving a huge swath unbuilt land to generate a side yard that allows bringing natural light and ventilation to the house. Similarly this free space generates a space for a possible expansion of internal social activities, which are on the first floor of the house. A room is left on the ground floor, now used by the eldest son and in the future for the parents when they get older.

A side box placed at one end of the house contains plumbing, electrical, and the stairs.

The private area is laid out on the second level, with living room and two bedrooms. One side of this level has an enclosure composed of independent doors that can regulate privacy, lighting and ventilation of the rooms, as opposed to a more open enclosure on the lower level that is linked to the side yard.

The whole house is built with concrete blocks placed without overlap, so it is reinforced, and lighter reinforced concrete slabs. The walls are made of plywood and glass frames on wooden bars. The house is designed as permanent housing, in a habitable stage, with ease improvement and subsequent adjustments by users.