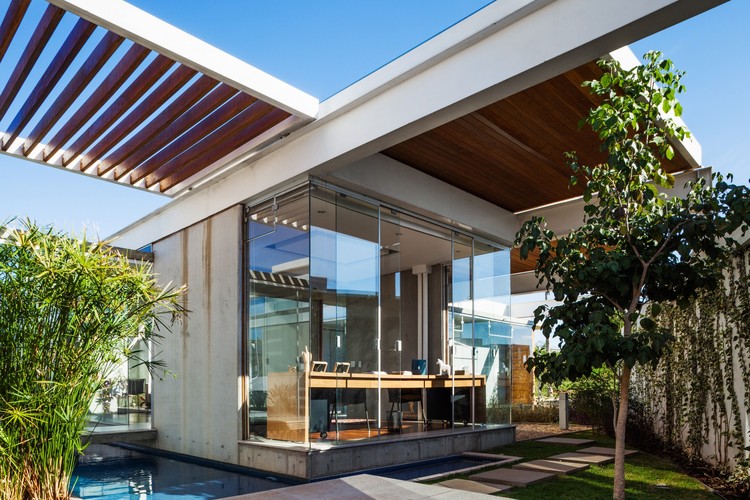 Text description provided by the architects. We were asked by a couple of a local University to design a residence of compact programme in a 500m² (5380ft²) site in a gated community. The husband, a technological-research specialist, longed for different-than-usual housing solutions, and had come into contact with our work through our “Tic-Tac Residence” concept-house, that had been published a few months prior. His wife, on the other hand, wished their home to be more on the conventional side, but also put a lot of value in the relationship between the built-object and the site.

That being said, we proponed a house in which the implantation is key: dividing the different sectors of the residence in smaller volumes, we positioned them in strategic places within the site, whose limits were walled due to the lack of interesting outside views. With that, the house had been turned in to itself, as a patio home. The purpouse of this is the discussion between interior and exterior spaces: in walling the site and positioning the house in different places within it we were able to create positive tensions between the built and the building void, attributing to each different characteristics. As a result, the perceptive limits of the building became the extremes of the site, and not the walls of the house themselves. This shift of perception is central to the design; a 170m² (1830ft²) residence receives the vastness of a 500m² house. In order to intensify this feeling, as well as to integrate the gardens with the interior spaces, the exterior walls are lit at night, being, again, put in the position of true limits of the house’s horizon.

The volumes’ positions within the implantation followed a pre-determined modulation pattern. Steel beams were positioned along this pattern up to the external walls, upon which they rest. These beams serve multiple purpouses: bracing of the structural pre-cast concrete walls, finishing of the gutters and steel coverings and spatial organization of the different volumes that compose the whole.

We also proponed a structural assay in this design – the use of shallow, simple foundations and the installation of pre-cast concrete walls, commonly used in Brasil for enclosing industrial hangars as well as vertical structuring (see indexed pictures). The beams mentioned above are rested upon these walls, dying on the limiting exterior walls. A steel roof is inserted on the beams’ web with ceiling space. This logical assembly took less than a month and ensured the rough concrete appearance where desired.

While the beams that cut the site hold structural functions, they also work as suspended rails for sliding pergolas and roofs that may be moved through the site following the residents’ wishes. In this way, it is possible to protect from rain or sun areas such as an open-air dining/barbecue room, put eaves on the office’s roof, protect a master bedroom’s window with pergolas, shade the solarium, and so on. The diversity of patios begin to compose a mutant spatial characteristic, as well as guaranteeing the physical house itself an even larger role on the in the residents’ day-to-day life.

The possibility of shifting the shading and protection of different parts of the residence according to the occasion or need is another artifice that intensifies the apprehension of external spaces as part of the building and part of the residents’ routine. This use of easily-moved, remote-controlled parts allowed for a much desired transparency in large stretches of the residence in a very warm, sun-bathed location, controlling the spatiality of shaded space.

A reflecting-swimming pool combo and a central hallway slightly lowered in relation to the main sections finish the composition of this residence that, although simple and synthetic, reveals a large amount of information, possibilities and sensations to the user, becoming an assay on architectural possibilities that our office has been eagerly chasing throughout the last decades. 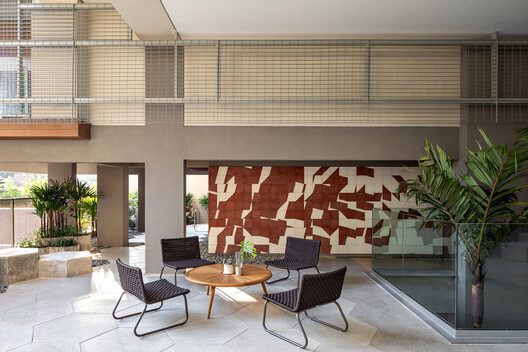