As the continent with the fastest growing population in the world, African frontiers will soon become attractive areas for urban settlements and the potential for conflicts arising from colonial borders may inhibit necessary economic growth. Colonialism’s legacy continues to spark conflict revolving around arbitrary borders established by Europeans in the nineteenth and twentieth centuries with no regard for ethnic, linguistic, and religious disparities across the continent. These decisions resulted in the separation of cultural communities within each nation and the creation of political boundaries that often did not reflect shared civil interests. Consequently sub-Saharan Africa has experienced sustained conflicts in the years following independence, resulting in diminished potential for further economic development in many regions. Today, border disputes have led to a rise in separatist movements in numerous countries, but African governments are hesitant to abandon the colonial borders to avoid further disruptive conflicts.

As political approaches to this issue continue to be extremely contentious, an architectural intervention at the urban scale proposed by Sebastian Irarrazaval Arquitectos may be the key to a prosperous cultural and economic future for Africa. In their concept for an ideal African city, Sebastian Irarrázaval and his team have conceptualized their solution as a network of trans-border cities. This set of “bi-national urban entities” will serve to erase the old colonial borders and "will reintegrate the continent as it was prior to European domination when cultural and economic exchange flourished." 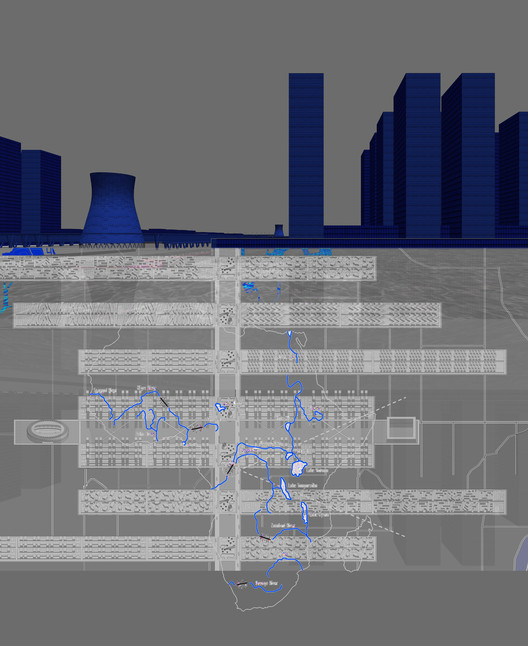 The vision of Trans-frontier Cities is an opportunity not only for territorial integration, but also as an avenue to address many longstanding continental challenges. For example, social integration of multi-ethnic groups, increased human capital, and higher sanitary standards are some of the primary issues developing cities in Africa must face if they are to foster growth and social cohesion. Taking these issues into consideration played an important role in developing the proposal, resulting in a "comb" shaped scheme that alternates urban and rural stripes of infrastructure.

The alternating nature of the scheme allows inhabitants to experience lively urban life, while retaining the mental and physical benefits of being close to nature. This aspect of the scheme functions as an overarching organizational structure that allows for the division of spaces based on program as they relate to the larger urban environment. As such, the main axis will contain public transport and water-cleaning infrastructure embedded in an artificial landscape that connects the airport and train station. This axis will be further defined by public squares that provide shade and spaces for outdoor markets and community gatherings. The secondary axis contains educational infrastructure and connects important public institutions, with the library at one end and the stadium at the other.

The separated elements of the urban pattern allow for self-organized neighborhoods with clear boundaries to reinforce ethnic identities that were once lost within the context of colonial nation borders. At the center of each of these neighborhoods will be a commercial pedestrian street, encircled by a street for cars and parking at the perimeter. The maximum length of each urban stripe is dictated by the human scale and is limited to ensure a maximum walk to the public transport axis of 20 minutes.

As seen in the massing of the built environment, the urban pattern of each stripe will be inspired by the traditional geometries found in all African crafts around the continent. The extrusions of these patterns reveal various configurations which share characteristically long perimeters to allow for double facades and cross ventilation. This is just one of many climatic considerations for the city, as promoting adequate comfort the tropical climate will be an important consideration.

Conversely, the rural stripes are depicted as vacant land to be used for agriculture production, organized by both a system of irrigation channels that extend from the main axis and perpendicular roads that connect each stripe. All forms of infrastructure are seen as opportunities for creating new and engaging public places, and because renewable sources do not pose the same health threats as energy plants once did, they will be placed in the center of the city along the water axis. This new urban landscape of eco-friendly chimneys will serve to signal and orient the citizens.

The proposal also includes preliminary ideas for zoning, with plans for its development in the coming decades. The outlying territories that occupy the trans-frontier cities will be considered Special Economic Zones (SEZ), with access through automobile national custom checkpoints, the train station, and the international airport. As a result of their geopolitical relevance and important economic centers, all land property will be kept state owned and developed under 70 to 90-year concessions schemes.