A team of students from Eindhoven University are set to build a forty metre high model of Antoni Gaudí’s Sagrada Familia out of 'ice'. The project, which follows their completion of the world’s biggest ice dome last year, will be constructed from pykrete and reinforced with wood fibres. The fifty-strong team will head to Finland on the 28th December 2014 to begin construction of the impressive 1:5 scale model, which will be built in only four weeks in order to officially open in the last week of January 2015.

Read about their unique construction method and see photos of the preparatory work after the break.

Thin layers of water and snow will be sprayed onto large, inflated molds. The pykrete - a combination of water (snow) mixed with 10% sawdust - will be immediately absorbed by the snow before freezing. According to the designers, "the wood fiber content makes the material three times as strong as normal ice, and it’s also a lot tougher."

Arno Pronk, the project's leader, has said that pykrete can be used to "build thin-walled temporary structures that are safe and low-cost." They hope that their technique will encourage environmentally friendly applications such as seasonal storage in agriculture, the offshore industry and expeditions, as well as for recreational facilities. According to Pronk, "the structures in the work of the architect Gaudí are scientifically the most interesting and although the ice building will have the same shape as the Sagrada Familia, it won’t have the same decorative exterior."

Find out more about the project here or scroll down to see an update on the project (27th January 2015).

Although the official opening was originally meant to be on the 24th January 2015, the highest dome (which will eventually reach thirty metres) has not been constructed due to setbacks in the weather. The 1:5 model, however, "certainly isn’t a failure." The highest towers currently measure twenty one metres high, "almost twice the height of ice dome that was built [in 2014]."

According to Arno Pronk, "we may have been a bit too ambitious, but you could say the same about Gaudí!" He continues: "We’ve built the highest ice tower ever, and the plans of the church will be completed. We’re still working on the central nave, but that won’t be a problem. And part of the largest dome tower will also be finished. It just means you’ll still be able to see the sky when we remove the supporting balloon." 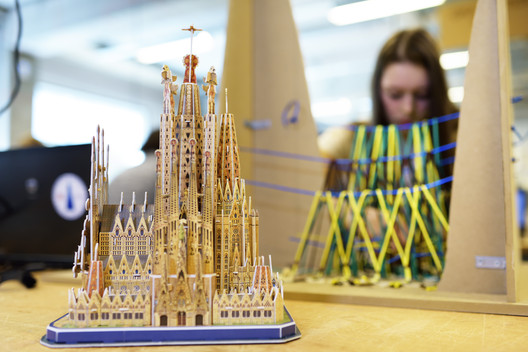