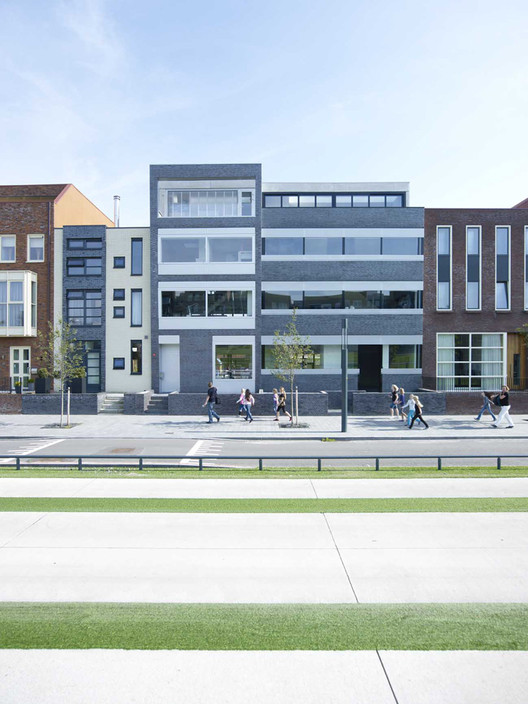 Text description provided by the architects. Today’s Roombeek is different from the working-class district of before the fireworks explosion that destroyed much its fabric. Although the structure takes its cue form the old layout, the new Roombeek differs both spatially and socially from the old one. There is now social diversification in the district, with a lot more houses in the upper price bracket, many of them built by owner occupiers. Some of these private clients have built freestanding houses on plots that are only fractionally larger than the footprint of the houses. A row of houses has also been built along the district’s central green zone.

The spatial masterplan for the reconstruction of Roombeek was drawn up by Pi de Bruijn of de Architekten Cie., one of the firms for which Uehara worked before setting up his own practice. Not that getting this double commission in Roombeek had anything to do with his former employer; the clients found Uehara via the Internet.

The two houses stand side by side in a row of owner-built houses which have only one common thing in common: a continuous shallow flight of steps at the front which distances the row of houses from the street and ties them all together. In this manifestation of individuality, the two houses by Uehara are the most reticent and consequently the most distinguished.

Both houses are unmistakably related, even though the gently inclined facades differ very slightly in their angle of inclination, facade composition, and in the brick used. The family resemblance was motivated by architectural and urban design considerations, but was appropriate as well in this case because the occupants are related. One house is occupied by the father and his partner, the other by the son and his family. The houses’ kinship is not confined to the facades, but also extends to the cross-section and depth. The biggest difference is that the son’s house is more compact, with a width of six metres compared with the nine metres of the father’s house.

One of the clients’ foremost wishes was that the houses should give an impression of spaciousness rather than being a succession of separate rooms. They themselves thought in terms of horizontal vistas but Uehara suggested making the spatial connections vertical as well. This is particularly effective in the bigger house where the bathroom and cupboard spaces are freestanding boxes, turning the house into one big, continuous space with split levels and cutaway floors, held together by a staircase. The split levels are a logical consequence of the difference in height between the street front and the lower garden side which, in keeping with local custom, is the main entrance.

The houses are open and transparent but, thanks to a subtle play of height differences in floors and window walls, both houses contain places that are intimate and sheltered. Despite the identical cross-sections, which make it relatively easy to achieve a column-free span of nine metres in the wider house, the houses differ markedly in their spatial effect. The smaller house with a square floor plan is more compact and vertical, while in the wide house the space extends breadthways. Both houses have a minimalist finish, a quality that is somewhat nullified by the domesticity and comfort the occupants have added with their furniture, luxury kitchens and bathrooms. Architects often deplore such loss of ‘purity’, but it is an unavoidable consequence of domestic architecture, which bids adieu to showroom perfection as soon as daily life takes possession of it, absorbs it, or in some cases even engulfs it. 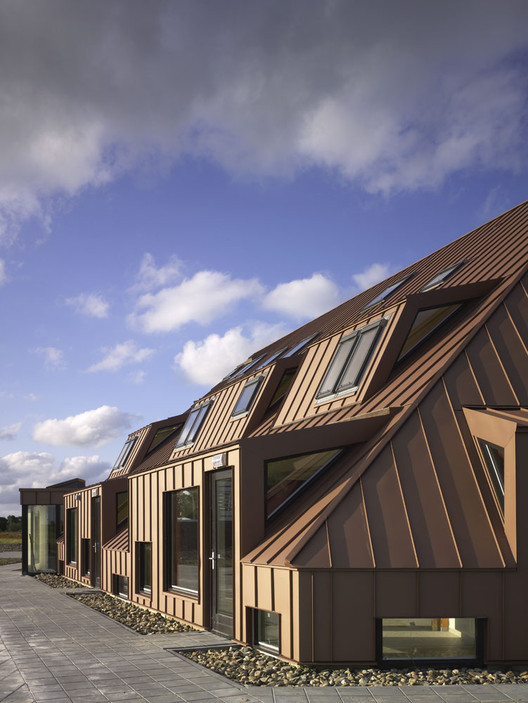