On the surface, Mies van der Rohe's minimalist linear designs have little in common with the kitsch of vernacular architecture in the German countryside. Enter Joachim Brohm, who rose to prominence in the 1980s as one of the first European architecture photographers to work in colour, and now in a current exhibition draws an unexpected parallel between van der Rohe's designs for the unrealized Krefeld Golf Club in Germany and the rudimentary constructions of vernacular post-war architecture.

In "Vernacular & Modern," the latest exhibition at London's Grimaldi Gavin gallery, two of Brohm's photo series are juxtaposed to create a new narrative on architectural context. In Typology 1979, Brohm documents a series of vernacular houses in Ruhr, Germany; while in Mies Model Study, Brohm enters the temporary installation of van der Rohe's unbuilt golf club through a life-size model. Together, the two series contrast the highly aestheticized minimalist world of Mies van der Rohe with highly functional buildings of necessity in the German countryside. 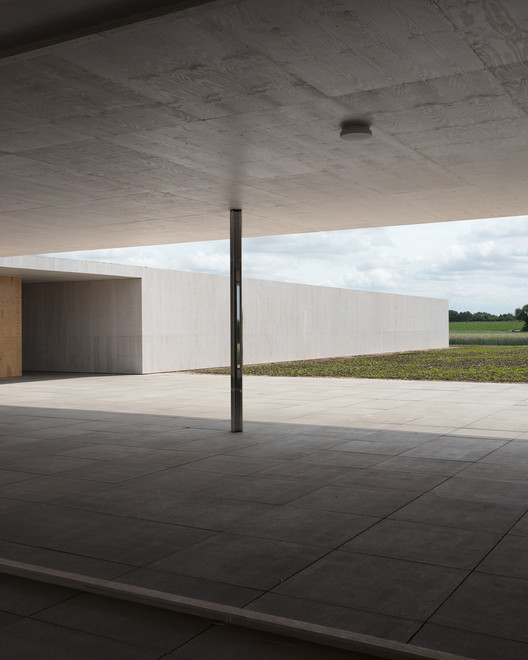 More than 80 years after designs for the Krefeld Golf Club were abandoned due to the Great Depression, Belgian architect Paul Robbrecht set about to realize the unfinished project. In 2013, a 1:1 scale model of Mies van der Rohe's original design was realized on the outskirts of Krefeld, a location Mies had selected. Built from unfinished drawings and unrefined plans, the space was rough and incomplete. The temporary space provided rare insight into what could have been – a notion that intrigued photographer Joachim Brohm, and is emphasized by his photographs which draw on the style of the original Modernist photographers, using a mixture of color and black and white images which incorporate diagonal lines and emphasize the open, flowing spaces of the Mies design.

Brohm has an extensive background in architectural photography. His portfolio of architectural eccentricities delves into the details of design anomalies, drawing attention to uncommon elements of building design. Brohm was given the opportunity to photograph the life-size Mies model, producing a series of photographs that examine the basic geometry of architectural design, with an emphasis on the unfinished elements of the building.

In stark contrast to Mies' minimalist paradise are the common residences of Ruhr, where affordability dictated aesthetic, and functionality trumped beauty. The photos belong to Brohm's series Typology 1979, a documentary retrospective that illustrates the products of wartime architecture when money, ornament, and good design were in short supply. The images depict the variety of architectures applied to the German landscape over several decades, noting the specific use of muted colours that were previously undocumented in black and white photography. According to Brohm, the architectural and colour choices of the houses speaks to a larger cultural landscape defined by post-war German politics that relied on austerity measures.

Brohm's series Mies Model Study has never before been shown to the public, no less in conjunction with Typology 1979. The combination of the two series behaves as a social commentary from Brohm, who links the projects through a common thread of social instability that ultimately affected the final product, forcing the creation of a new method of design. Brohm's photographs serve as an observer's dissection of two contrasting types of architecture that demonstrates his "ongoing concern with architectural structures and in particular with the relationship between architecture as an environment for recreation."

Vernacular & Modern is on display at the Grimaldi Gavin gallery until January 10th, 2015.