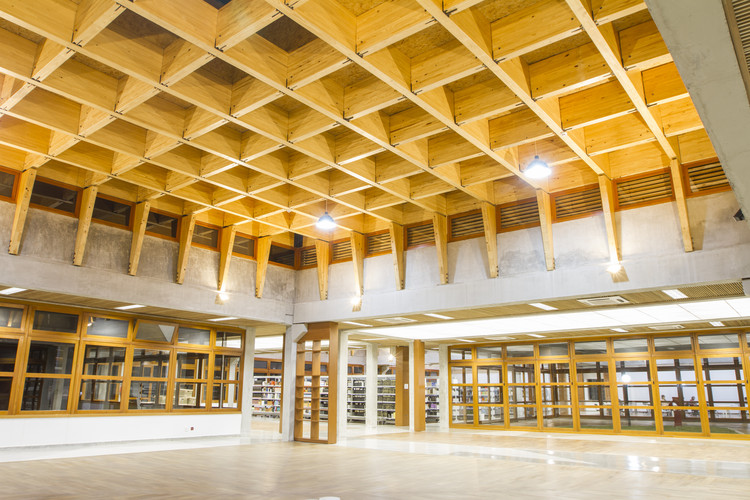 Text description provided by the architects. The construction of the new library for the Parque Tecnológico Itaipu (Itaipu Technological Park – PTI in portuguese) over the ruins of the former Itaipu workforce housing lodges aimed at writing the history of the largest dam in the Americas into built form. By preserving physically and metaphorically the state in which the PTI found the area when it started to be implemented, the building highlights the expressive renewal the old sheds have gone through since the Park was created.

The building was first proposed by the Technological Park masterplan to significantly enlarge the previous spaces for the library’s collection, research and public functions while providing support for the research and development activities of the Park. From this early stage and in all other design phases the library has been granted a prominent status, due to the activities it would house and the emphasis they deserve in an institution that deals mostly with knowledge and development. Moreover, the site chosen for its construction had an unparalleled symbolism for the epic history of Itaipu, being one of the best preserved examples from the dam’s construction in the 1970s.

Aiming at the preservation of this record, the ruins of the dam’s builders former housing lodges were partly preserved with all the signs of ageing on their walls. From this gesture, a dialog was struck between the old and new, the past construction and the present development. This dialogue grew to become the conceptual backbone of the design proposal: the connection of past to present as a symbol for the knowledge the library would house and the role this knowledge would have as a base upon which to build the future.

After the cleaning and structural stabilization processes the ruins steer the visitor to the main entrance of the library, presenting didactically the dialogue between past and future through the PTI accomplishments. From the main entrance, the library distributes study rooms, lounges and the library’s collection, as well as administrative and support spaces in a sequence of interfaces between the existing ruins and the new building. The plan adopted an open configuration, aimed at greater flexibility, especially on the collection areas.

As a gesture of generosity, the rooftops of the building are made accessible by a series of ramps and stairs that connect the library to the surrounding open spaces of the PTI campus. This makes the library rooftops part of the different routes of the PTI users, giving them new perspectives of the site and its surroundings. This configuration is also an analogy to the knowledge housed by the library: a gesture of extension from the physical spaces of the library, disseminating information and culture throughout the PTI campus. 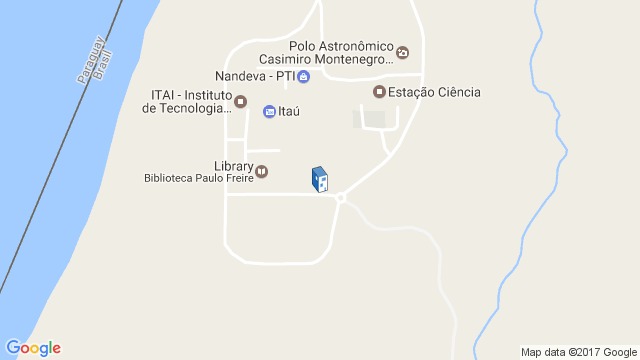 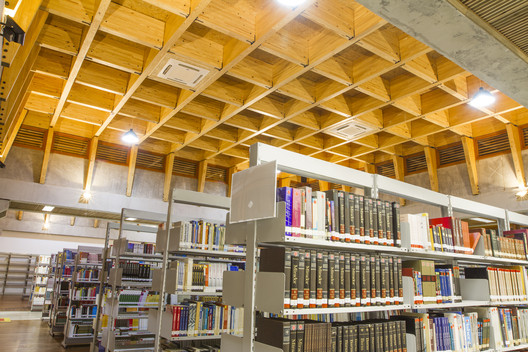