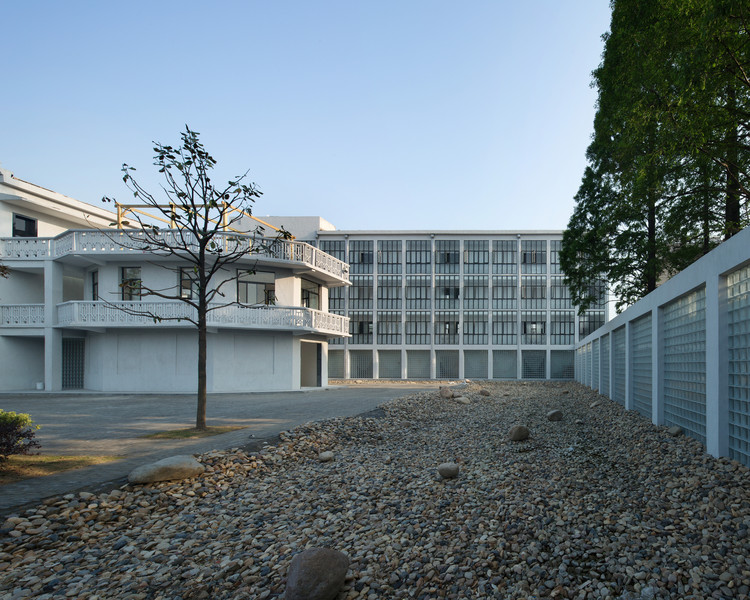 Text description provided by the architects. Location of the project: Wantou village of Yangzhou, has been famous for its tradition of Jade carving. Local government planned to turn Wantou to a sightseeing spot featuring fabrication and trade of jade-handicrafts. The project sits at the entrance of the old village, previous occupation was a 4-story high elementary school. With quite limited budget our client want it to be renovated into a mix-use with an open workshop and exhibition, commercial space.

Although the existing school building is not really strong in terms of both aesthetics and construction quality, its straight-forward functionalism, its authenticity and its unique 80`s features have touched us deeply and made us be in great favor of it. We hope through our design, these identities will be well kept after the implantation of new program.

In terms of the general planning, we transform the school sport-yard into an entrance square, which is defined by the factory, a 2-stroy high dormitory building to the south, and a newly introduced corridor for connection of the 2 buildings. Structure of the corridor is of the same module as the facade of the factory and could be regarded as the extension of the factory for space enclosure.

On the square we introduce a stone pool, a scenery similar to natural riverbank where best raw-material of jade is collected. This scene will bring visitors back to the long tradition of jade mining and fabrication. All the rain water from the site is collected to this pool, in no time there will be green.

In terms of the program, we introduced exhibition and commercial space at the ground level, and open workshop from level2 to level4. Canteen and living units are located in the brick building to the south of the entrance square, together with reception program.

We re-directed the circulation. The previous auditorium of the school, which is located right at the center of the site, are renovated as the entrance hall to the workshop. Visitors will be directed to the hall, and the exhibition space, and guided to workshop space on the 2nd floor. They will leave the building through the exit on the north facade of the factory.

Along the south facade there were exterior corridors featuring pre-fabricated cement handrails, which is also used on neighboring residential buildings. Pre-fabricated cement handrails are massively used on many building typologies from the 60s to the 80s in China as the replacement of steel handrails due to lack of social productivity. For us, it authentically carries the identity of that specific period and has become a heritage itself.

At the entrance level, we introduced a more human scale with curved glass-brick walls, which gives the whole south facade a thicker shadow at the bottom and a more homogenous lighting condition for the interior space. We used two kinds of glass bricks, one is clear while the other is semi-transparent. The glass bricks are arranged in the way that view from inside of the building is confined, so that only the stone pool ( instead of the yard ) is revealed from inside. Jade stones which are exhibited are again related to the raw stones that are scattered in the stone pool when people experience the space.

On the north facade, we used GRP (Glass Reinforced Plastic) grid frame as an additional layer to the existing facade. This layer not only provided enough view protection to the heat exchangers of air-conditionings, but en-gifted the facade with a bigger scale and also a stronger gesture to the street in front of it. GRP material are by nature greenish and translucent like jade, an emblem of the program which the building contains. 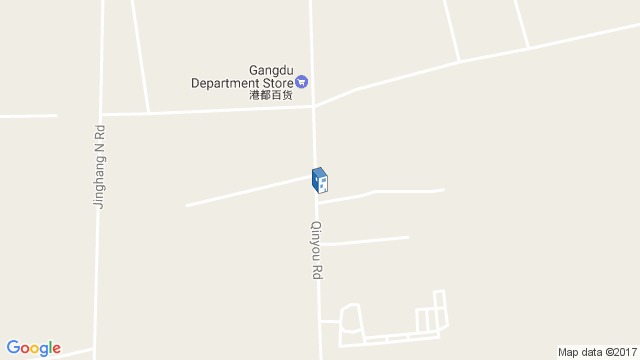