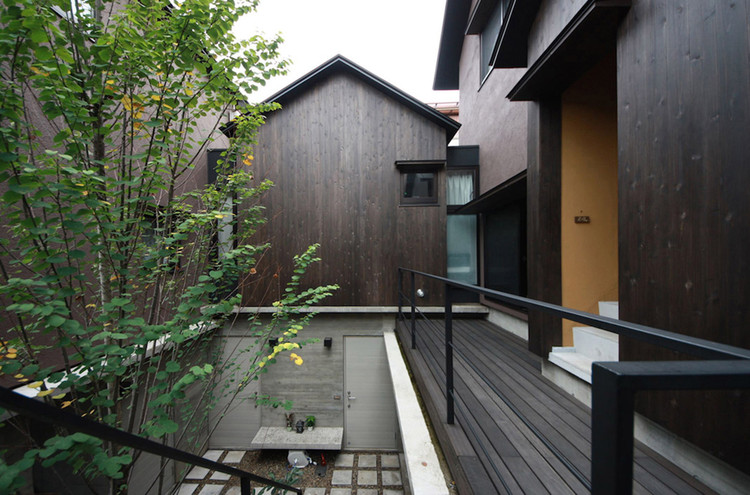 Text description provided by the architects. This is ISANA, a multi-layered row house in Musashino City, Tokyo. The owner of the house informed us that it is customary in his home country of India to build some rooms for rent along with the construction of a new house. Following the custom, we planned the owner’s house with the floor area of approximately 70m2 plus rental housing units with floor areas from 25m2 to 30m2.

In the beginning, the owner described to us the image of the place as “a little house in the woods” and his words became the key to our design in all aspects. However, we imagined that required spaces for rent would inevitably sum up into a large volume, and therefore set our design strategy to divide and disperse the rental housing units to create the image of “a little house.” The house is designed as a collective body of smaller houses. The large volume is dismantled and gradually blended into the city, standing there as if it is a house for all people, and yet somehow not belonging to anyone at the same time.

ISANA was built after the occurrence of the Great Tohoku earthquake in 2011. After the completion, new tenants moved into rental housing units and activities of their everyday lives unfold around the courtyard in an atmosphere of a boarding house rather than an apartment building. Some sounds from upper and lower floors are heard because it is comprised of wood construction. But according to the owner, it rather makes him feel alive and secure to hear some sounds and feel neighbors’ presence in the same house. It is also a nice surprise for him to see various people wandering into the courtyard everyday.

Trees in the woods extend their branches fully to shelter, protect and accept us all. Although composed of a simple shape, they accommodate many living creatures in various places. Giving does not mean losing something, but it represents a will to protect and be protected, and to connect with others. This house consists of very small places and features, but its good will extend and be connected to the world.