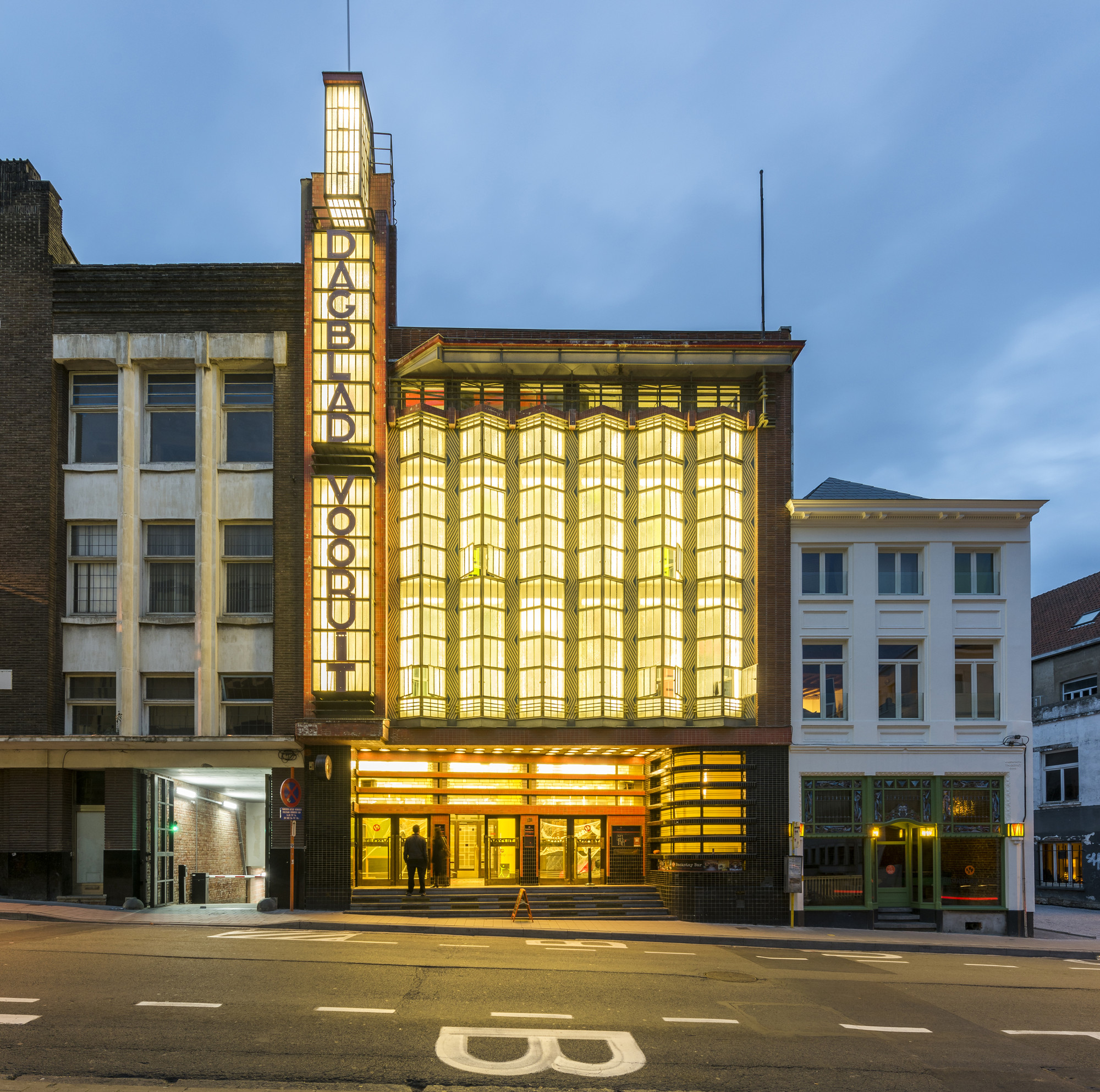 Text description provided by the architects. The hostel found its home in the former tabling office of ‘Dagblad Vooruit’ (socialist newspaper) in the Sint-­‐Pietersnieuwstraat 128 in Ghent (Belgium). These premises dating from 1930 with their striking frosted glass eclectic front designed by architect Brunfaut, most certainly stir many people’s imagination. Because of that, it has been protected as a monument.

After the ‘Dagblad Vooruit’ stopped its activities, the premises were in the eighties modified into the cultural house “Backstage” And until today it is still known to most people under this name. The neighbouring premises on the right side, with shop front, housed in the old days the pub ‘Hof van Beroep’. These premises were also integrated in the project.

In 2009 student home landlord Upgrade Estate bought the entire complex. At the back a new construction was added containing 105 student rooms, an underground car park and a commercial area. In 2013 a license was delivered to modify the monument itself into a hostel with 108 beds. At the time Alderman Balthazar said "It is our intention to expand the Sint-­‐ Pietersnieuwstraat into a central connecting lane between the art quarter and the inner city. On that axle we now lack in su_cient tourist amenities".

The Backstay Hostel is a spin-­‐off of Upgrade Estate from Ghent. Apart from realizing sustainable student accommodation Upgrade Estate wants to expand its range into the short-­‐stay segment. Budget-­‐friendly lodging in a unique setting.ting is part of that vision.

Our hostel is conveniently located in the middle of the university nucleus of the city, opposite the renowned art centre Vooruit and just minutes away from the historic city centre. The hostel offers 108 beds and 15 rooms and as such is one of the largest hostels in the Ghent region. Both groups and individual travellers are very welcome here.

“Every traveller is a friend”... This baseline was created to cover much more than just the mere contents of our challenge. A personal service to each individual traveller is our goal, wishing to avoid a business-­‐like and cool reception.

The renovation works took a little less than one year. The entire renovation was done in a positive understanding with the urban planning commission and in particular with the department of Monuments’ Conservation. The hostel opened its doors on June 20, 2014. Respecting the past of the building, an original total concept was developed for the interior, the design and even the atmosphere. Apart from the added value of the historic architecture of our premises, we also want to present ourselves as a trendy, international hostel in a vibrant city of culture.

All furniture has been tailor-­‐made. Through the opaque windows of the façade a soft-­‐filtered light enters the sleeping quarters. At night the entire glass front bathes in light. This nightly image of the building is without ado unique. All dorms rooms and bedrooms are named after famous, international newspapers (Le Monde, the New York Times, Die Zeit, El País, La Stampa, the Guardian,...).

In the former pub visitors can enjoy a ‘Travellers zone’. During their stay, it is the place where our guests can relax. For their convenience, also a podium was built and a piano and even guitars are at hand. The first spontaneous jam sessions are already a fact... The renovation works were very intensive and a number of setbacks – characteristic for such renovations – had to be overcome. But finally we were able to realize in full the overall image constantly borne in mind.

The ground-­‐floor bar is open to travellers, Ghent residents and accidental visitors alike. The bar furniture was upholstered with hundreds of wooden typesetting letters from the collection of printing house Strobbe (Izegem). Colourful globes illuminate our bar in a playful winky way. During the works the original ceiling appeared to be entirely affected by domestic dry rot fungus (Serpula lacrymans) and had to be removed. The plain but contemporary design of the new bar modestly serves the adjoining protected monumental spaces.

The lobby, bar, breakfast room and the terrace integrate seamlessly in each other. We always intended for the ground-­‐floor to be a meeting place for our travellers and visitors. The quote “A journey is best measured in friends, not in miles” is most prominently present in the interior of our breakfast room.

History was written in our building. Apart from the tabling offices of ‘Dagblad Vooruit’ some famous Flemish poets, such as Louis Paul Boon and Richard Minne, had their niche here. From the beginning the modest, concrete structure of the top lighthouse spurred our inspiration. We looked for a suitable interpretation of this undefined space with its almost sacral zenith light. How better serve the building’s history than to make this space available to anyone bitten by the writing bug...

We call this space our ‘blog-­‐room’, located in the illuminated tower of the façade. It is freely open to travellers and Ghent residents to jot down their stories. 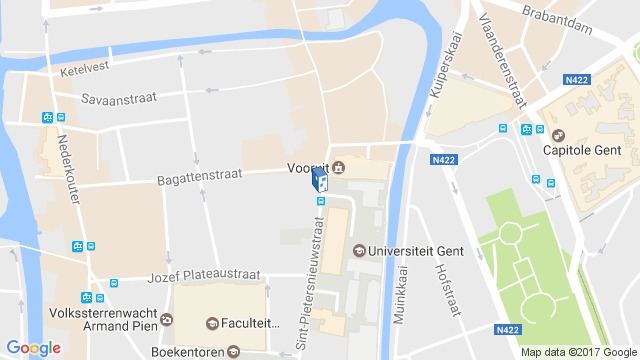