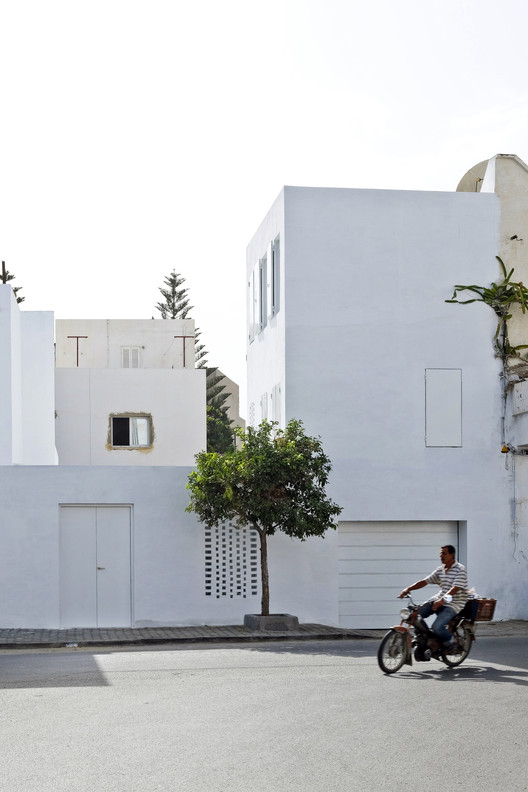 Text description provided by the architects. Renovation and extension of a house in the historic heart of the city Hammamet. The existing house is a traditional Tunisian courtyard house. It was converted over time but retained an alternation of solids and voids that provide light and natural ventilation. The client lives alone but often receives guests, and the brief demanded two separate living areas.

The aim of the project was to maintain the two courtyards and to organize the main living functions around them, and to create a multitude of horizontal and vertical connections - spatial and visual. So that the users can interact between the different spaces and levels of the house.

The two level extension is aligned on the facade overlooking the street. It rises to the same height as the neighboring buildings. The added volume reveals the presence of a house hitherto invisible from the street. The extension hosts the guests living area. It has its own independent terrace that is accessed from a new staircase. The core of the house is apprehensive from the studio terrace, and a visual connection is established.

The choice was to use local materials and know-how . All woodwork and metalwork were custom made by local artisans. The use of plaster and lime paint on all exterior walls using traditional techniques allows the new construction to be well integrated with the context. It also underlines the facade by the play of light and shadows. The floors are in concrete that is left raw in the living room, waxed in the bedrooms and white-washed in the two courtyards.

All exterior surfaces are treated in the same way in order to unify the exterior spaces.