The Supreme Committee for Delivery & Legacy has released images of the third 2022 World Cup Stadium planned for Qatar. Revamping an existing 40-year-old stadium at Gulf Cup in Riyadh, the Khalifa International Stadium will be expanded to accommodate 40,000 spectators and equipped with an “innovative cooling technology” that will allow players to compete at a comfortable 26 degrees Celsius. 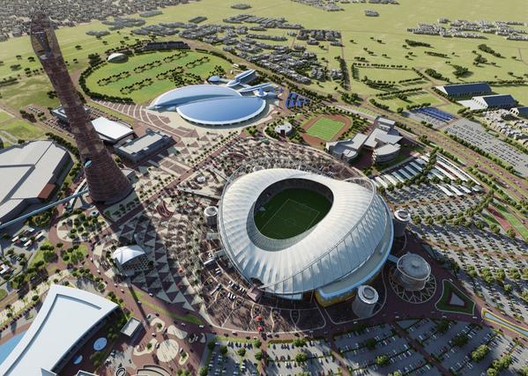 The building, constructed in 1976 and first renovated for the Asian Games in 2006, will be updated with a single roof to shelter the seating areas and a new east wing structure that will host food courts, shops, multi-purpose rooms, VIP lounges and a health center. Space will also be provided for a new 3-2-1 Qatar Olympic and Sports Museum that will feature historic sport collections and interactive exhibitions.

The Khalifa International Stadium is the third design unveiled for the 2022 World Cup, joining the Al Bayt Stadium and Zaha Hadid Architects‘ Al Wakrah Stadium. All stadiums will be linked by a modern transport network that will transport fans quickly between venues.

News via the Supreme Committee.