Save
House in Hampstead / Cullinan Studio 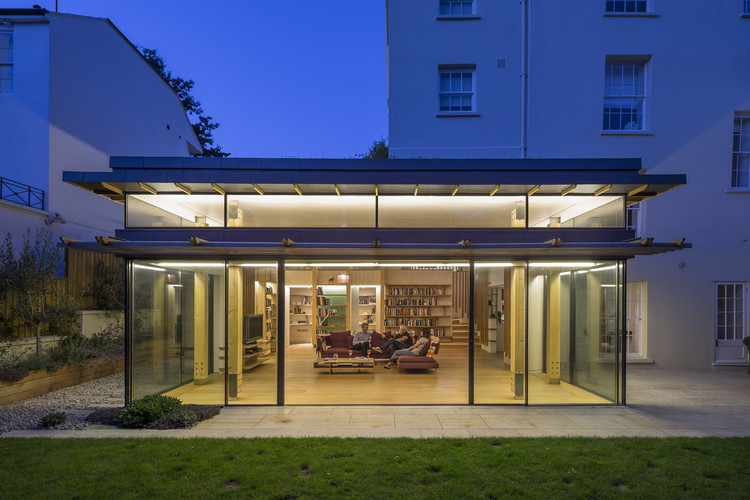 Text description provided by the architects. Much of the original integrity of this Grade II listed Georgian house had been lost through a series of clumsy interventions. The house was poorly planned – with no real central living space or easy flow from one part to another.

We did not want to simply add on more living space but rather improve the upper and lower ground floors of the house in a way that worked with the existing building, both internally and externally. It was clear that the new part of the building would relate to the garden on a more domestic scale if its height were lower.

A bold new plan was devised. Using the pure geometry of a ‘cube’, we created a new large central living space, giving the house a new heart. Smaller rooms opening off this space match the rhythms of family life: there’s a warm and welcoming place to come together in but also spaces to quietly retreat to.

Clever arrangement of the kitchen, pantry, utility room and cloakroom makes for a smoothly and efficiently run home.

A steel and timber structure forms the ‘cube’. The warmth and comfort that the client was looking for was achieved through a simple palette of waxed birch ply and oak to line the stairs, floors, walls and ceiling. We worked closely with craftsmen to ensure an immaculate finish. The birch ceiling is washed with light from a continuous ribbon of clerestory windows.

Spaces open into each other – and out into the garden. The delight of a London garden is enjoyed from carefully organised windows and also from an upper outdoor terrace.

Extensions to similar houses close by had aimed for a contrast to the existing style. We took a different approach and started with what was already there. We chose materials that were the same or similar to the original house: timber; glass; neutral-coloured fenestration; and off-white coloured rendered masonry panels.

With the massing and external materials of the new extension we sought to complement the existing building. Minimal changes were made to the front elevation – so nothing of its heritage character is lost.

We also considered the neighbours and improved their outlook over the house. The view is now of foliage and a sedum roof rather than a shed roof and lean-to slate roof.