Save
House in Mohali / Charged Voids 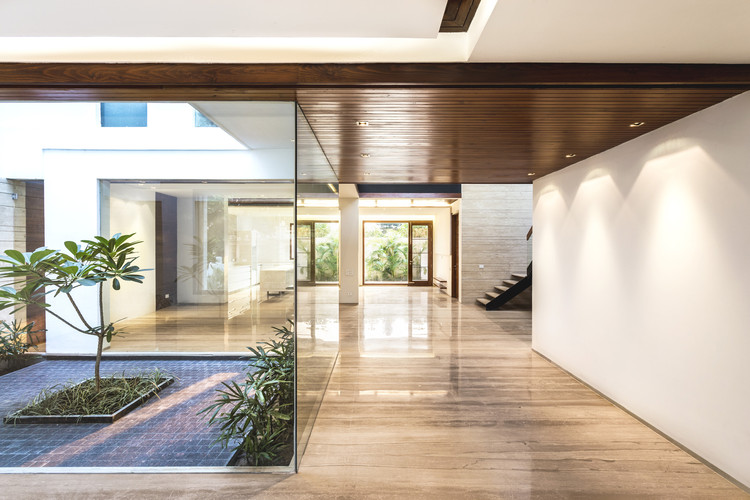 Text description provided by the architects. The project is located in Mohali, a satellite town of Chandigarh that is witnessing fast paced growth like most Indian cities. The brief of the client, a builder was to design a house for selling that is universal in character so that it is acceptable & appreciated by all kinds of end users ranging from a high earning professional to a wealthy farmer.

The overall concept was devised as a free plan with overlapping spaces to allow flexibility. However, the movement was choreographed so as to unfold the layers as one moves along the vertical axis of the house. The overall space is organized around a central courtyard that not only allows for light & ventilation but also serves as a means of introducing space in the interior that is excluded of the covered area regulated by building byelaws. The aim of the design i.e. to respond to universality has been adhered to by keeping in mind the principles of Vaastushastra (an ancient science that a number of users want to follow).

Although, the overall spirit of the space is strongly Indian in character with emphasis on transcendent spaces like the verandahs & covered terraces yet the architecture vocabulary is completely contemporary with a very universal detailing. The interiors were conceived as a space defined by planes turning & intersecting while in some cases carefully sliding over each other.

Another, important aspect of the concept was the emphasis on ambiguous boundaries which is also manifested literally in peripheral boundary walls of the project.

The dwelling unit had a total of 5 bedrooms. The ground floor houses all the public areas & 2 bedrooms while the first floor has 3 bedrooms along with a central space that is integrated with the large front covered terrace.

The material palette of the house is very restrained & neutral in the interiors. However, strong & rough textures have been used in most of the landscaped areas including the central courtyard.